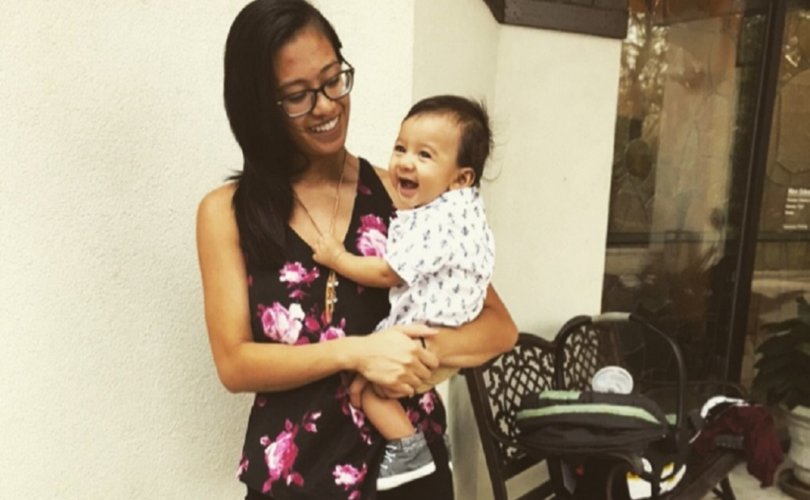 Katrina and her son, Gabriel, whom she rescued from abortion with Abortion Pill Reversal in 2017.Pregnancy Help News

March 21, 2018 (Pregnancy Help News) – On a Saturday morning in early 2017, Katrina officially hit rock bottom. A day earlier, she had caved in – at her boyfriend's insistence – and surrendered to abortion at a clinic in Alamonte Springs, Florida, near Orlando.

As guilty as she felt, there was just no turning back now as she sat across the table from Mercedes Henry at Life Choices Medical Clinic – a pro-life pregnancy center located right next door to the abortion clinic Katrina had visited the day before.

That's how Katrina felt in the moment, at least. The dread of fear and shame over her pregnancy had given way to a settled, lifelong night of hopeless finality the moment she took the first of two pills in the chemical “abortion pill” regimen.

It would take a miracle to save her baby at this point, but perhaps something even more extraordinary to revive the hope that had died in her heart 24 hours earlier.

Even while Henry pleaded with her to try and rescue her baby with an off-label use of progesterone that's been used since the 1950s to hold off early miscarriages, Katrina just couldn't see the glimmer of light opening wide before her eyes.

After spending an hour with Katrina, begging her to take one more chance at life, Henry offered to pray with her, then left the room to get a drink of water.

By the time she came back, Katrina's mind had changed. She was ready to give Abortion Pill Reversal a try.

“I don't know what happened,” Katrina said. “I really don't know what changed in me, but in those few moments she was gone, I just felt this overwhelming sense of peace. For the first time since I found out I was pregnant, I didn't feel like I was living in fear.”

A Miracle in the Making

The fact the two women were talking at all was miraculous in and of itself. In the weeks leading up to her abortion next door, Katrina had been practically hijacked by fear and shame – not to mention constant manipulation from her boyfriend, who threatened to kill himself if she didn't abort their child.

Enslaved by those dynamics, Katrina told her sister, a practicing Catholic, about her pregnancy at one point. On the day of her abortion, Katrina lied and told her sister she'd lost the baby in a miscarriage. She hadn't dared to tell her parents, who were living in Jacksonville, but they realized she was pregnant when they found a Google search Katrina had run on their home computer over Christmas break.

Incredibly, Katrina's parents put two and two together the very day of her abortion, and showed up unannounced in Orlando – a two-hour drive from their home. Katrina told them the truth, thinking that would be the end of it, but her mother started a Google search of her own.

Eventually, Katrina's mother found the Abortion Pill Reversal network and hotline (AbortionPillReversal.com, 1-877-558-0333), which has helped over 400 mothers rescue their children after starting the two-step abortion pill process since 2007.

That's what led the family to Life Choices Medical Clinic in Alamonte Springs – just steps away from the abortion clinic Katrina's boyfriend drove her to the day before.

“I told my mom, 'Hey, this isn't the place,'” Katrina said. “'I don't know what it is, but this is the place I actually got the abortion.' She started freaking out, but then I looked again and realized we were headed next door.

“It was just so welcoming inside. You feel relaxed and at ease – the total, complete opposite of when I was at the abortion clinic.”

A Choice of Her Own

The weeks leading up to that Saturday afternoon had taken a heavy emotional toll on Katrina, which made it an uphill climb for her parents and Henry to help her see she could still change her mind.

Before she found out she was pregnant, she'd been the president of her sorority and was looking ahead to her future career, just over the horizon of the upcoming spring semester. Now, it seemed, Katrina was at a crucial crossroads.

Katrina was raised as a Catholic, but college life had taken care of that. By the time she knew she was pregnant, Katrina's nominal faith was no match for her boyfriend's knee-jerk reaction and relentless pressure.

Still, the despair she felt after having taken mifepristone – the first pill in the chemical abortion pill process, known euphemistically as “medication abortion” or technically as RU-486 – was as crushing as it was immediate.

“The second I got there, it didn't feel right,” Katrina said. “It was just an eerie, chilling feeling once I walked in. I just felt completely lifeless. The second I actually took the pill, it hit me – 'I can't believe that my selfishness is really getting the best of me and allowing me to murder an unborn child because of my own selfish reasons and because someone else is getting in my head.'”

At no point in the process did the abortion clinic staff so much as mention the possibility that Katrina could change her mind and stop the abortion once it was started. In the minds and ledgers of the abortion business, Katrina had already made her “choice,” and there was no turning back now.

It was another story altogether at the pregnancy center next door, however, where Henry answered Katrina's doubts and fears to finally empower her to make her own decision.

Finally, when Henry came back into the room with a cup of cold water, she looked Katrina in the eye and said, “Let's save your baby, Katrina.”

Within hours, Katrina was in the office of Life Choices' medical director John Littell, MD, FAAFP, receiving emergency injections of progesterone to try and counter the effects of the first abortion pill. Later that spring – after weeks of regular progesterone treatment – Katrina gave birth to a healthy little boy she named Gabriel.

Along the way, Katrina finished up her college degree and landed a job in her hometown, where she and Gabriel live with her parents.

“Everything just seemed like it was God's hand at work,” Katrina said. “We are so blessed to have this amazing kid, even though he wasn't in our plans at all. He was just completely unexpected, but he's been such a blessing to everyone who's been part of this. It's really brought us closer together in ways we couldn't have imagined.”

While Katrina's story is exceptional on multiple levels, women in her situation are exactly why Life Choices opened shop next door to the abortion business in the summer of 2015.

The center sees about 1,300 women per year, many of whom – just like Katrina – resort to abortion because they feel they have no other choice. As their name indicates, Life Choices is there to counter the very hopelessness that keeps abortion businesses like the one next door afloat financially.

In addition to free pregnancy tests, free ultrasounds and help with material goods, Life Choices offers ongoing parenting classes and support for women and men who regret a past abortion.

“Katrina has said from the beginning, 'I never want to be a mom,' but she's now a great, very thankful mom,” Life Choices' executive director Norma Stives said. “It is amazing what can happen when information and love are presented to these women who are under such great stress. Katrina is a great example of what happens when you're empowered.”