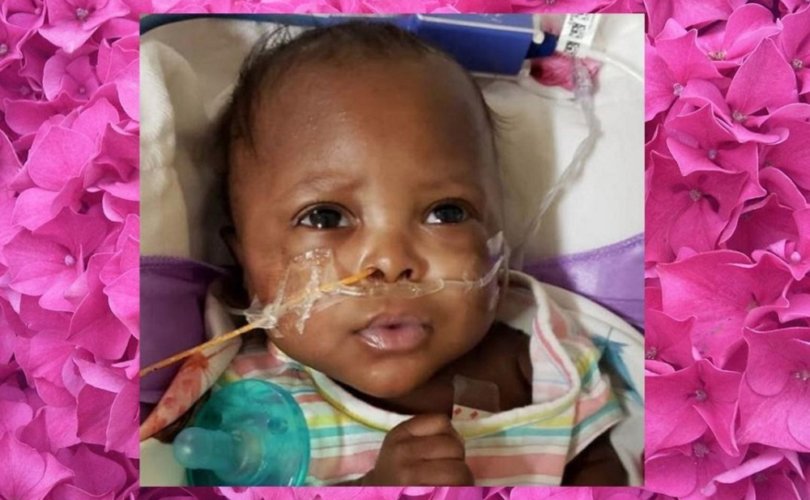 October 30, 2019 (Live Action News) — Born 15 weeks early in May of this year, baby Kallie Bender of Phoenix, Arizona, was discharged home with her family on Monday after 150 days in the hospital.

During her pregnancy, Kallie’s mother, Ebonie, had been seeing a high-risk doctor for high blood pressure, also called pregnancy-induced hypertension. High blood pressure in a pregnant woman can be dangerous for the baby because of reduced blood flow to the baby through the placenta, also called placental insufficiency. Over time, reduced blood flow to the baby can prevent the baby from growing properly (medically, this is called intrauterine growth restriction or IUGR) and lead to lung and gastro-intestinal development problems.

Four days before Kallie was born, an ultrasound at a high-risk appointment showed that due to poor placental blood flow, also called absent end diastolic flow, Kallie had almost no amniotic fluid around her. Mom Ebonie was admitted to the hospital, and Kallie was born via cesarean section (C-section) on May 20th, 2019, at 25 weeks gestation. She weighed less than one pound, and was shorter than a Barbie doll placed next to her in her incubator.

At first, Kallie required a machine to help her breathe, and a tube to feed her. Shortly after birth, she underwent surgery to correct a heart defect that’s common in very premature babies called patent ductus arteriosus. In fact, she was 37 days old before mom Ebonie and dad Dameon could hold her.

Becky Cole, one of Kallie’s primary care nurses in the neonatal intensive care unit (NICU), recalled that day. She said, “I didn’t get to be there when Dameon got to hold her for the first time, but I got to help Ebonie hold Kallie for the first time. That was really an amazing moment, and it took a few of us. It wasn’t easy.”

Dr. Vinit Manuel, medical director of the NICU at Dignity Health St. Joseph’s Hospital and Medical Center where Kallie was born, noted that “no technology can replace the womb,” and that “the involvement of the family in the care of these babies is crucial.”

During her hospital stay, Kallie’s parents and brothers read aloud to her, which research has shown improves overall outcomes for tiny babies and decreases complications of hospitalization. Now, Kallie weighs seven pounds and is thriving. She went home Monday with oxygen and a feeding tube, with goals to “graduate” from needing both in the future.

Stories like baby Kallie’s are becoming more common as medical technology enables babies to survive at ever-earlier gestational ages outside of the womb. Twenty-four weeks is widely considered the age of viability, the point at which a baby has a 50/50 shot at surviving outside the womb with significant medical support, but stories of survival like 22-week-old Cullens, 21-week-old Lylas, and 21-week-old Elioras are out there, too.

Devastatingly, babies even further along than Kallie was at birth are still targeted for abortion. Wantedness, not the possibilities of scientific technology, determines whether they live or die.