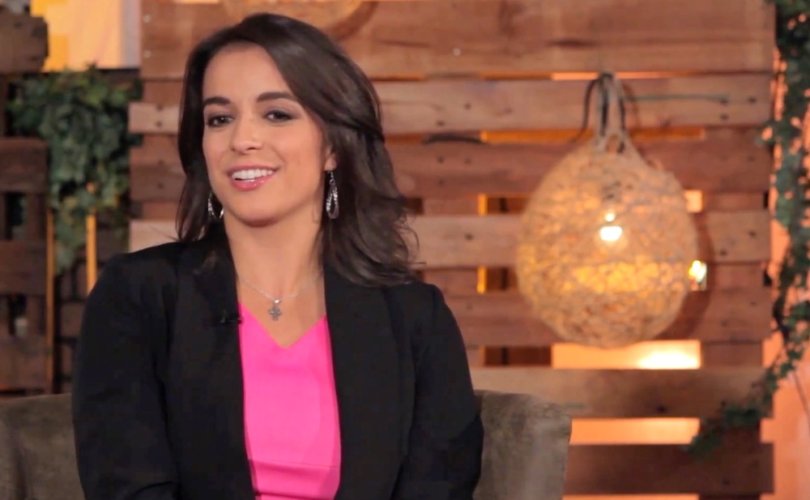 HOLLYWOOD, October 30, 2017 (LifeSiteNews) – It’s the power of Jesus Christ that brought a young woman from a “vegetative” state for four years to Dancing With The Stars, the mother of dance star Victoria Arlen shared with LifeSiteNews.

“God is one hundred percent the one who brought Victoria through,” Jacqueline Arlen said. “This journey is the most amazing thing to ever happen to our family.”

After Victoria Arlen spent four years in a “vegetative” state, many in the medical establishment had given up on her. Now she’s whirling across a stage competing on ABC’s “Dancing with the Stars.”

At age 11, Arlen started showing signs of two rare disorders that caused swelling in her brain and spinal cord. But doctors couldn’t figure out what was wrong.

Untreated, she began to lose function in her legs, then her hands and arms. She couldn’t swallow and couldn’t think of the words she wanted to say. Ultimately, her body shut down completely. She fell into a Permanent Vegetative State (PVS).

“Unbeknownst to my loved ones I was trapped in a ‘vegetative’ state, literally ‘locked in’ my own body,” Victoria shared, “constantly hearing doctors tell my family that it was highly unlikely that I would survive and if I did survive I’d be a ‘vegetable’ the rest of my life.”

“I never knew how precious life was until I was perfectly fine one day and in a blink of an eye I was laying in a hospital bed, unable to walk, talk, eat, move and fighting for my life,” Victoria shared on Instagram.

Raised by her parents Larry and Jacqueline as a Christian, Jesus was always a part of Victoria’s life. That faith brought her from the absolute darkness of a “permanent vegetative state” (PVS) to the bright lights of a television dance floor.

Outwardly PVS yet internally-conscious for two years, God was literally the only person Victoria could communicate with.

“When she was ‘locked-in,’ she had nobody else other than God Who could hear her,” mother Jacqueline explained to LifeSiteNews.  “So that’s Who she convened with on a daily basis.”

During her long ordeal, at perhaps her lowest and ready to give up, Victoria says she had “an epiphany,” which means, “a manifestation of God.”

“I made a promise with God,” Victoria revealed.  “‘If You give me this second chance at life, I promise You I will not waste a single moment.”

Simultaneously, Victoria’s ordeal powerfully strengthened the faith of her family.

Jacqueline recalled how, in the middle of the night in April 2006, she was trying to comfort her daughter as Victoria was crying out in pain.  “I was rocking her, and it just came out of me.  I said, ‘Victoria, we’re going on a journey, and we’re going to impact the world.”

“At that point, she was just eleven,” Jacqueline said, but “I held on to that all those years when it was so bad.  Because the words just came out, it wasn’t me.  It was like God saying, ‘Hang on. You’re going on a journey, and you’re going to impact the world.’”

One pivotal moment among many was when Ugandan Catholic priest Fr. John Bashobora fervently prayed for Victoria.

“Father John Bashobora from Uganda prayed over Victoria in 2009,” Jacqueline added, “He is such a good part of her healing.  And so many other prayers along the way.”  Fr. Bashobora, who leads charismatic healing crusades, eschews publicity.

“We truly believe God was at work the whole way,” Jacqueline added.

Diagnosed as completely hopeless, Victoria nonetheless slowly came out of PVS, still paralyzed from the waist down.  With the ever-present support of her family, she worked tirelessly every day in the hopes of regaining the use of her legs.

“I never lost my hope and vision for getting out of that chair,” Victoria said.

Strapped into a harness above a treadmill, trainers at Project Walk moved her legs in the hope that somehow the constant activity would stimulate her lower body to “wake up.”

As Victoria’s amazing story shows, it worked.  Her long years of daily intense effort paid off, and though she still can’t feel her legs, she’s competing on ABC-TV’s Dancing With The Stars.

As Victoria summarized on Facebook, “I trusted in God’s plan and believed in something greater, and I am beyond grateful that I can stand here today, sharing my story.”

Victoria’s trial brought a deeper faith in her family.  “Through this journey, I went from believing to knowing,” Jacqueline confided in LifeSiteNews, emphasizing that “Religion is having a relationship with God.”

After “waking up” and slowly re-learning motor skills, Victoria began sharing on social media in 2012.  Wanting not only to help others overcome physical obstacles, she posted to spiritually strengthen and inspire as well.

Seeking to be an example rather than a preacher, Victoria often included a biblical citation –just the biblical reference— in her Instagram posts.  One citation she described as “My favorite verse that keeps me going.”

It’s Philippians 4:13, which reads, “I can do all things through Christ, who strengthens me.”

Both Victoria and her mother say all this tragedy happened for a divinely-appointed reason.  “I wouldn’t choose this life,” Victoria said, “but I wouldn’t change it.”

“It’s all God,” her mother told LifeSiteNews, referring to Victoria’s healing, her Paralympic swimming wins, her growing fame as an ESPN analyst, her competing on DWTS, and her a book about the “journey.”

Victoria signed a book deal in April with Howard Books, the faith-based division of Simon and Schuster. “Locked In,” is scheduled to be released in May 2018.

“God’s written this book. This book is powerful,” the proud mother told LifeSiteNews.

“That’s why Victoria is doing what she’s doing now,” Jacqueline added.  “I believe God wanted to let the world know about her, because this book is going to change the world in a big way.”

Jacqueline explained her belief that God “brought Victoria into the spotlight, and her faith is coming through, because she’s faithful to Jesus at the end of the day.”

Victoria says she is doing DWTS to be a “beacon of hope.”  “I’ve had my whole world ripped away from me, but I’ve gotten it back and I’ve picked up the pieces,” she told E-Online.  “I got my life back for a reason.  I got my voice back for a reason. I shouldn’t be here, by medical standards.”

“I think there’s a lot of people going through different things where you feel like your whole world’s imploded and you feel like you lost it all, whether it’s physical, emotional, whatever you’re going through,” Victoria said.  “If I can be that beacon of hope for people that need it the most through dancing and through our storytelling, then I’ve done my job.”

And how does Jacqueline hope Victoria’s story “impacts the world”?

“Bring them to Jesus!” Jacqueline exclaimed.  “That’s what we want to do, to bring them to find God’s light and love, to give faith and hope, and to realize that all is not lost.  That you can do all things through Christ Who strengthens you.  That’s what we really want at the end of the day.”

In another of her ubiquitous Instagram posts, Victoria lists Ephesians 3:20, which says, “Now to Him Who by the power at work within us is able to do far more abundantly than all that we ask or think, to Him be glory in the church and in Christ Jesus to all generations, forever.  Amen.”