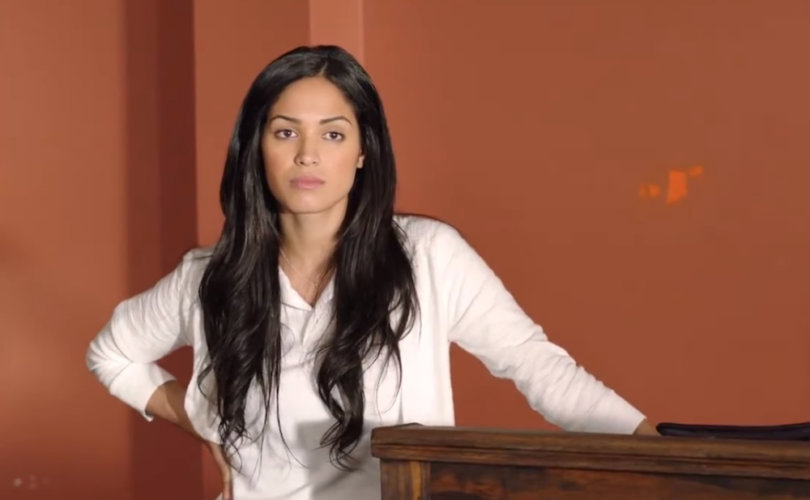 Moriah Peters in 'Because of Grácia'

June 13, 2017 (LifeSiteNews) — Moriah Peters knows about standing up for chastity. When the award-winning actress auditioned for American Idol in 2010, she was criticized for saying she was saving her first kiss for marriage. She recalled one of the celebrity panelists telling her, “I think you’re trying to be too perfect. You need to go into the world and make mistakes. ” Another advised her to go out and kiss a boy because it would make her feel “sexier.”

“That was God closing the door [on further participation in the show],” said Peters. As she left, she prayed, “God, why did I just spend five months of my senior year praying for this when I could have been studying for Finals?!”

In a wonderful example of art imitating life, the now-married Peters stars in “Because of Grácia,” a film about four high school seniors. The teens’ different takes on sexuality transform their lives. Pro-life, pro-chastity arguments get a fair hearing.

“I play Grácia,” Peters told Upliftv. “She is a very strong and central character. She is a girl with convictions. But the thing that I love about her is that she really represents her name well.”

The film, which will be released in September, won two awards at the 2017 Life Fest Film Festival. It is based on a 2001 play called “G Factor” by author and director Tom Simes. The native of Saskatoon, Saskatchewan, was a high school teacher for 27 years and has seen Christian kids becoming increasingly marginalized by secular humanism. “I felt like they were becoming almost undercover Christians,” Simes told Upliftv. “And so I wanted to create a story that really resonated with them and would lift them up and help them have a voice.”

The story centers on an ambitious but insecure boy named Chase Morgan (Chris Massoglia), whose life is transformed by Grácia, the newest student at Eastglenn High. Grácia’s convictions are tested by their teacher, played by producer Owen Presland-White, and by opposition from “cool girls” viewers may recognize from their own high school days. John Schneider of “Dukes of Hazzard” fame plays the school principal.

According to the Hollywood Reporter, the film will be distributed by ArtAffects Entertainment, the company who brought Mel Gibson’s “The Passion of the Christ” to cinemas across the USA. The founders, Daniel and Margo Lange, plan to release “Because of Grácia” in 20 markets and then expand. “We just want to release meaningful films with good messages,” Margo Lange told the Reporter. “Grácia is a small film, but I think it can touch a lot of people.”