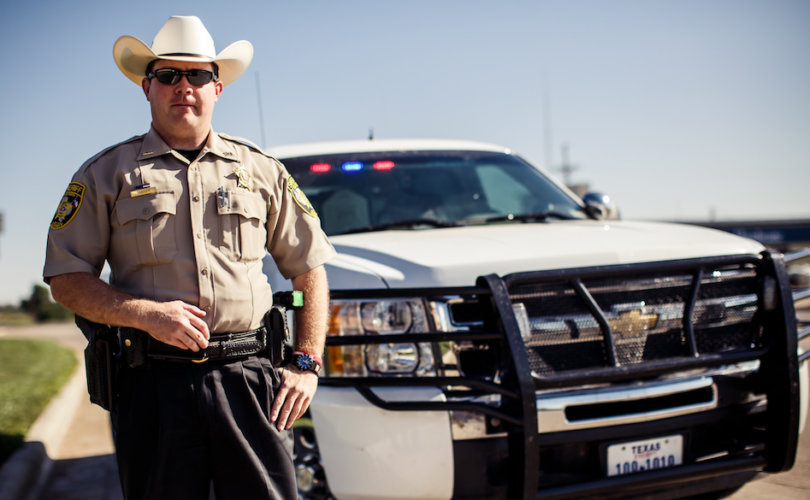 (LifeSiteNews) – Sheriffs across the United States are rising up against Joe Biden’s new vaccine mandates for private businesses, vowing not to enforce coercive COVID vaccination requirements in their counties or for their workforces.

Chennault echoed several other Oklahoma sheriffs who have promised to defy vaccine orders from the Biden administration in recent days. “I’m appalled at some of the absolute dictator-like tactics we are seeing from our Federal Government and several other State Governments,” Logan County Sheriff Damon Devereaux wrote in a press release dated September 13.

“As law enforcement officers, our first and foremost duty, and what we all swear an oath to do, is to support and defend the Constitution of the United States,” he said. “It is in that defense and the defense of religious liberty, that the Logan County Sheriff’s Office HAS NOT, AND WILL NOT mandate the COVID vaccine for any of our employees as long as I am the Sheriff.”

Similar statements against federal vaccine mandates have been reported in nearly a dozen states. “No employee will be required to have any intrusion of their body without their total consent,” the sheriff of Hamblen County, Tennessee recently announced. “I will NOT mandate our employees to receive the vaccination against their will,” Iowa sheriff Chad Sheehan likewise said, “I was elected by the citizens of Woodbury County to defend their freedoms and liberties guaranteed in the constitution of the United States.”

— Article continues below Petition —
BOYCOTT United over religious and medical COVID vaccine exemptions
Show Petition Text
21727 have signed the petition.
Let's get to 22500!
Thank you for signing this petition!
Add your signature:
Show Petition Text

The COVID-19 vaccine requirements announced by Biden on September 9 include strict mandates for all federal workers and contractors, as well as for healthcare workers whose employers receive funding through Medicare or Medicaid.

Another policy yet to be formalized would impose vaccination or testing requirements for all businesses with over 100 employees. That rule, which is expected to be implemented by the Department of Labor’s Office of Safety and Health Administration (OSHA), could apply to more than 80 million Americans and result in fines of nearly $14,000 per violation.

“Yesterday we witnessed an unbelievable tyrannical executive action by President Joe Biden,” Sheriff Casey Graham of Bollinger County, Missouri, responded at the time. “We, as Americans, must stand up to Government overreach that we witnessed yesterday,” and he pledged that his office “will NEVER enforce such mandates by our Federal Government.”

One Texas sheriff even likened Biden’s actions to terrorism by “a domestic enemy.” “On 9/11 we experienced the foreign enemy,” Houston-area sheriff Bo Stallman wrote on the anniversary of the September 11 attacks. “Today we have a domestic enemy: the potential of a tyrannical, overreaching government that threatens to violate the constitutional rights of our citizens.”

Doubts about the legality of federal vaccine dictates also underpinned a recent statement from the South Carolina Sheriffs Association (SCSA), which represents all of the state’s 46 county sheriffs, saying that they cannot enforce presidential executive orders and warning that “we all should be leery of government overreach on any level.”

“We have the Constitution that was created to protect us from that overreach and as Sheriffs, here in the Upstate and across South Carolina, we’re not standing for that,” Sheriff Hobart Lewis of Greenville County explained. “We tried to release a statement that would include all 46 sheriffs in South Carolina and I think the letter’s pretty plain, that we’re concerned about government overreach.”

The South Carolina Sheriff’s Association said they cannot enforce President Joe Biden’s vaccine mandate, saying that they do not have the authority to enforce federal law. https://t.co/TavtRoz9Lz

Biden’s vaccine mandates will likely run into roadblocks without the support of state and local leaders, including in 22 states with state-directed OSHA plans.

“The U.S. Department of Labor and the Occupational Safety & Health Administration, which the Biden Administration has directed to enforce its mandate, often rely on state government entities to enforce their regulations at a local level,” Judge Todd Little of Ellis County, Texas, said in press release after his vote to approve a county resolution against vaccination mandates. “When state or local governments oppose these rules, they become unenforceable, and the federal programs fall apart.”

OSHA’s anticipated COVID vaccine requirements for private businesses have drawn virtually unanimous condemnation from Republican governors, some of whom, like Missouri Gov. Mike Parsons, have already said they will block use of state resources to enforce them.

Republican attorneys general in at least 24 states have threatened legal action against the Biden administration’s orders, as well. Arizona Attorney General Mark Brnovich earlier this month filed the first lawsuit against vaccination rules for federal workers, arguing that they discriminate against U.S. citizens, as they do not apply to illegal immigrants.