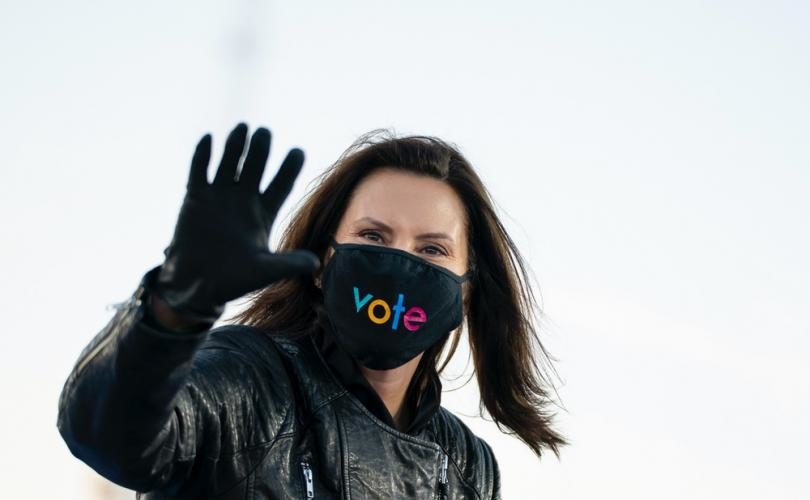 GRAND RAPIDS, Michigan, May 27, 2021 (LifeSiteNews) — Conservative activists and elected officials in Michigan have been relentless in their attacks on Democrat Gov. Gretchen Whitmer the last several days. Whitmer was recently caught violating her own mask mandate at a bar in the capital city of Lansing with a group of friends. She’s also under fire for lying about a personal trip she took to Florida during the COVID-19 outbreak.

But this week isn’t the first time Republicans in the Wolverine State have called out the first-term, pro-abortion Democrat. On May 14 at the “America’s Comeback Tour” with Nigel Farage in Grand Rapids, grassroots leaders and public officials told LifeSiteNews that Whitmer’s authoritarian administration is effectively destroying the state.

“It's certainly hard to work with somebody who's working unilaterally, unconstitutionally, and using unelected bureaucrats to control and usurp power of the legislature,” Republican Steve Carra told LifeSite at the rally.

Carra is a pro-life state representative who recently announced he’s running to unseat incumbent Republican Congressman Fred Upton, who has been in office since 1987. Upton, along with fellow Michigan GOP Congressman Peter Meijer, was one of 10 Republicans to vote to impeach President Donald Trump earlier this year.

Carra has taken a leading role in Michigan politics regarding the coronavirus. He recently authored HB 4791, which would outlaw discriminatory COVID measures like mask mandates from being implemented by the state. He informed LifeSite that he’s working on a bill with fellow state Representative Matt Maddock, a Republican, that would push back against social media censorship.

“It's unfortunate that we're up against this with … the media and big government,” he said. “They want to continue to control our lives and to make our decisions for us.”

“It feels like Gretchen Whitmer is maybe signaling that she's looking at the polling numbers,” Maddock said, alluding to the fact that Whitmer partially lifted her draconian lockdown orders earlier this month. “I think she's in a free fall and she's freaking out a little bit. So she's deciding that maybe she should pay attention to the angry masses that are tired of being shut down and restrained.”

— Article continues below Petition —
SUPPORT clergy who rebuked Michigan Governor for saying "Abortion is life-sustaining"
Show Petition Text
9891 have signed the petition.
Let's get to 10000!
Thank you for signing this petition!
Add your signature:
Show Petition Text

The Michigan Catholic Conference is to be commended for speaking out forcefully against Governor Gretchen Whitmer's self-contradictory statement that abortion is "life-sustaining."

Please SIGN this petition, which thanks these senior clerics for calling out Whitmer's egregious moral and intellectual corruption.

The Michigan Governor made these remarks in a recent interview with David Axelrod, who questioned Whitmer about her decision to allow elective abortions to continue unabated during the COVID-19 pandemic, consuming valuable resources which could otherwise be used to treat victims of COVID-19.

Whitmer responded by stating: "A woman’s health care, her whole future, her ability to decide if and when she starts a family is not an election. It is a fundamental to her life. It is life-sustaining, and it’s something that government should not be getting in the middle of."

In response, the Michigan Catholic Conference issued this plain-speaking rebuke (reprinted in part):

“Governor Whitmer’s comment that abortion is ‘life-sustaining’ comes as no surprise; for most if not all of her political career the governor has carried the banner for abortion on demand through all nine months of pregnancy. Her comments indicate how easily candidates for higher office are pushed into a dark corner by the abortion industry. Joe Biden’s abdication of his forty-year support for the Hyde Amendment no doubt paved the way...

And, one member of the Conference, Bishop Walkowiak of Grand Rapids issued his own rejoinder (as part of a longer statement) to the governor's warped comments:

"Two persons enter an abortion clinic. Only one comes out. Abortion is not life-sustaining..."

Bishop Walkowiak then squarely placed emphasis where it needs to be, in helping to eliminate the crisis, in a crisis pregnancy, not the preborn child:

"We reiterate our complete and continuing commitment to support the health and well-being of all human life from conception to natural death. The Catholic Church’s efforts and resources remain available to all families. Well over 150,000 low-income mothers deliver their babies at Catholic hospitals each year, and tens of thousands of pregnant and parenting moms are helped each year through Catholic Charities programs and other agencies. We will continue to walk with moms in need."

If Governor Whitmer were really interested in the health care of all, she would seek to encourage a culture of life where every life is cherished, rather than her ruthless defense of abortion, even at the cost of COVID-19 victims.

Please SIGN and SHARE this petition which congratulates the bishops of the Michigan Catholic Conference for their stand against Michigan Governor Gretchen Whitmer's offensive remarks, calling abortion "life-sustaining."

'MCC Responds to Comments from Governor Whitmer That Abortion is 'Life-Sustaining'' - https://www.micatholic.org/advocacy/news-room/news-releases/2020/response-to-governors-statement-that-abortion-is-life-affirming/

'Response to Gov. Whitmer’s comment that abortion is 'life-sustaining'' - https://grdiocese.org/response-to-governor-whitmers-comment-that-abortion-is-life-sustaining/

“The good news is people are waking up. They always said — especially our governor — that they’re following ‘the science’ and ‘the data.’ Well, they never told you that it was ‘political science’ and ‘polling data’ that they were following.”

“We've got to open up, we've got to get things back and moving,” he continued. “If you’re still presiding over a state that is locked down, shut down, well, then you lost the battle.”

Barclay, who hosts a morning show called West Michigan Live With Justin Barclay, further said that, in reality, Whitmer isn’t necessarily to blame. Rather, the people of Michigan are.

“I don't know how popular this is going to be, but we gave our freedom away. They didn't take it from us. We volunteered it up. And it's our time to say, ‘You know what? Not anymore! We're taking it back.’”

Approximately 600 patriots attended the “America’s Comeback Tour” with Nigel Farage at the DeltaPlex Arena in Grand Rapids, Michigan earlier this month. Farage’s main message to the pro-Trump crowd was that Western Civilization is under attack from Marxism and cancel culture and that conservatives need to get mobilized in order to protect their freedoms. Whitmer’s term in office ends January 1, 2023. Several Republicans have already announced their candidacy for governor.