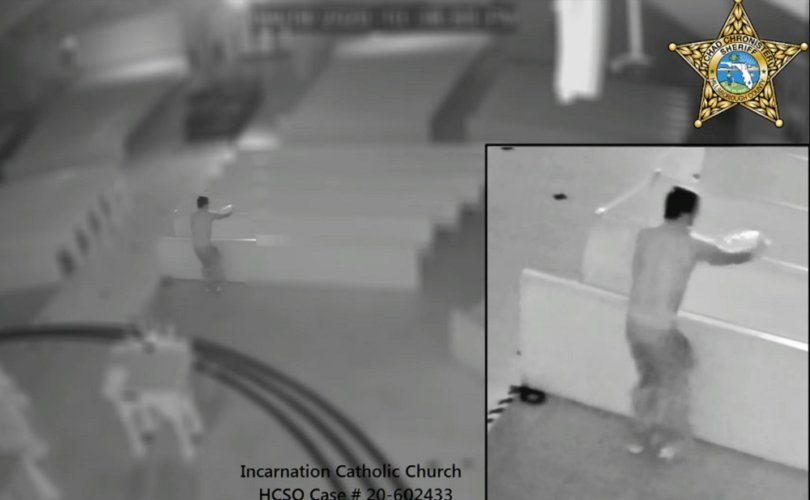 According to the Tampa Bay Times, police are looking for the man, who broke into Incarnation Catholic Church in Town ’n’ Country, Hillsborough Country, Florida last Friday night.

Security footage shows the as yet unidentified arsonist smashing through a church door to disable the lock and then taking a bottle inside. The bearded white man, who was wearing only gloves, a mask, trousers, and running shoes, then sprinkled three pews with liquid from the bottle and set them ablaze.

According to the Hillsborough County Sheriff’s Office, the break-in and arson occurred at 10:36 P.M. The arsonist didn’t steal anything, and he remained in the church for no more than three minutes.

Fr. Mike Cornier addressed the event before Mass in remarks recorded for the internet.

“An individual broke into the church with the full intention of burning our church to the ground,” he said.

“Initially the thought was to close down the church and to restore those benches, and then open up again. But we thought if we did that … we wouldn’t have Mass for one weekend, and evil would win.”

The priest asked the congregation to pray with him in thanksgiving that the church was not destroyed and for the arsonist.

“We pray for this individual, that You remove the malice and the hatred from his heart,” he prayed.

“May this terrible act cause us to unify, to love one another more than ever, and to continue to make Incarnation the bedrock of faith and strength it has always been.”

Parishioners and friends of Incarnation Catholic Church were shocked by the news.

“I was devastated and heartbroken when I was messaged about the incident,” wrote Beth Galvin, now of Masaryktown, on Facebook.

“I was one of the three sign interpreters for 10:30 Mass at Incarnation for almost 2 decades. My son received First Communion at Incarnation Catholic Church,” she disclosed.

“The people and the parish are the most welcoming and wonderful. I am at a loss how someone could do such a horrible thing, not only to The Church of the Incarnation, but to any House of God.”

“So sorry this happened,” wrote Marty Ruscetta on the Facebook page for the Incarnation Catholic parish.

“I’ve been a parishioner at Incarnation since 1981 and I am very sad someone has tried to burn a place where so many people worship God.”

The incident was only the latest of a number of physical attacks on Catholic churches across the United States this year. They have included graffiti, the defacing or destruction of religious statues, and arson. In July, another Catholic church in Florida, Queen of Peace, was severely damaged when a young man drove a van into it and started a large fire with gasoline. This arsonist was apprehended.

To express your support to Incarnation Catholic Church, please send cards to: