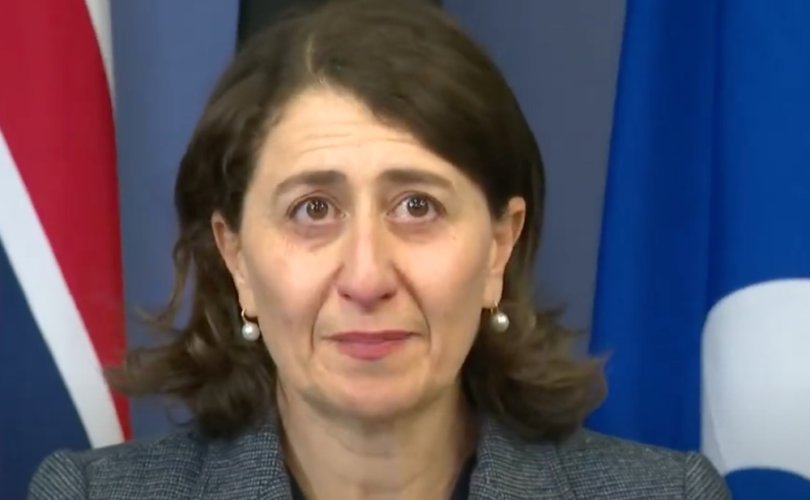 SYDNEY, Australia (LifeSiteNews) – Hope for freedom’s return has been sparked in an Australian state by the shock resignation of its COVID-tyrant premier.

On Friday morning, Premier of New South Wales Gladys Berejiklian resigned amid news of a formal investigation into her past conduct by the Independent Commission Against Corruption (ICAC).

Gladys Berejiklian announced that her resignation “could not happen at a worse time.” Nevertheless, she was forced to resign from Parliament and her electoral seat of Willoughby in North Sydney.

“Resigning at this time is against every instinct in my being and something which I do not want to do,” stated Berejiklian.

“I love my job, and I love serving the community, but I have been given no option following the statement that has been issued today,” she continued.

“My only regret will be not to be able to finish the job to ensure the people of NSW transition to living freely with Covid.”

Hours before her resignation, the Independent Commission Against Corruption (ICAC) announced that it was opening a formal investigation to discover whether Berejiklian had breached public trust. Berejiklian was in a personal relationship with former Member of New South Wales’ Legislative Assembly, Daryl Maguire, when she awarded grants to several community organisations in Maguire’s NSW Riverina region between 2012 and 2018.

At the centre of the ICAC investigation is a $5.5 million government grant to the Australian Clay Target Association and a $30 million grant to the Riverina Conservatorium of Music, which were being developed in Maguire’s former seat of Wagga Wagga.

The Independent Commission Against Corruption (ICAC) is a body tasked to investigate corruption within the NSW public sector, which includes members of the Australian Parliament.

Berejiklian has been strongly criticized for the draconian lockdowns she has imposed upon Australians living in New South Wales.

In a recent press conference, United Australia Party’s Clive Palmer argued that Berejiklian’s corruption is even more egregious in her support for the vaccine mandates, lockdowns, and violent police enforcement of totalitarian public health orders responsible for destroying Australian lives and businesses.
Palmer stated he had evidence that Berejiklian “is being directed by a lobbyist in Sydney who is being paid by Astrazeneca and by Pfizer tens of millions of dollars to get these policies through and to make sure the vaccine is pushed.” Many of the former Premier’s critics suggest that Berejiklian was being used as a scapegoat to push through mandates in exchange for a lighter sentence.

Treasurer Dominic Perrottet, the second-highest ranking member of the New South Wales Liberal Party, has emerged as the frontrunner to replace the disgraced Premier.

Former Liberal Prime Minister John Howard has publicly endorsed Perrottet, stating the deputy leader was “the best person for the job.” There are also reports of a deal secured with both the moderate and progressive factions within the Liberal Party.

Following Berejiklian’s shock resignation, Perrotet stated that “The interests of the people of NSW must always come first, and the priority for the government is to ensure we continue to keep people safe, and that we reopen the economy and get people back to work, kids back to school, and life back to normal as fast as possible.”

The appointment of Dominic Perrottet as Premier of New South Wales could have a tremendous impact on the nation’s future, particularly in ridding itself of onerous COVID-19 restrictions.

Perrottet has criticized the Public Health Orders, arguing that lockdowns have caused significant damage to the education and mental health of young Australians. When NSW Chief Health Officer Dr Kerry Chant suggested the initial extension of lockdowns in Sydney, Perrottet is reported to have responded that Chant and other government officials should sacrifice their own salaries in solidarity with the Australians they were forcing into bankruptcy.

Today we announce WestInvest – a brand new $5 billion fund to revitalise Western Sydney as we reopen and recover from COVID and a tough 18 months.

More than anything else, it’s an investment in the people and communities that make Western Sydney the vibrant heart of our city. pic.twitter.com/IlVVaRkDlC

Perrottet has indicated his support for an individual’s choice to be vaccinated while respecting the decisions of those who chose to remain unvaccinated. In a recent interview with 2GB Radio, the Treasurer told host Joe Hildebrand that once “every single person in this state has had the opportunity to be vaccinated with two doses, then we should open up for everyone.”
“I want to see more unity and not have a two-tiered society here.”

I predict NSW will be completely open, no lockdowns and minimal restrictions by Wednesday next week. Sorry Kerry Chant, but your services no longer required in a Perrottet government #nswpol #covid19nsw

Perrottet has also hinted that, given the opportunity, he will bring about immediate economic reform and end of draconian public health orders. This includes indefinite lockdowns, the restrictions on businesses or places of worship, and mandatory vaccinations.

As deputy leader of the NSW Liberal Party, Perrottet is also the leader of the Liberal Party’s conservative wing. Perrottet raised eyebrows for his support of President Donald Trump, denouncing the “almost religious devotion of the political left to climate change” and his vehement stance against pro-abortion legislation in 2019. A devout Catholic, Perrottet declared that he could not support laws that stopped “the beating heart of an unborn child.”

Perrottet lives in his electorate of Epping with his wife Helen and their six children Charlotte, Amelia, Annabelle, William, Harriet, and Beatrice. He studied law at the University of Sydney and worked as a lawyer until his election to the New South Wales Parliament in 2011.