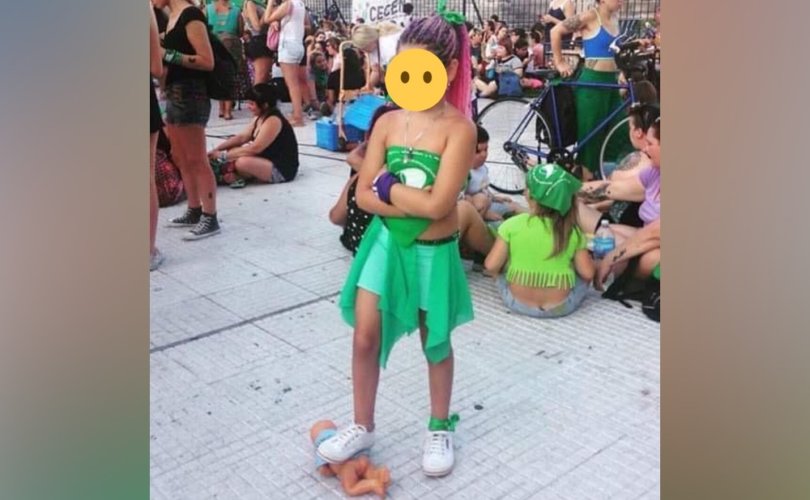 BUENOS AIRES, February 28, 2019 (LifeSiteNews) – A disturbing photo has surfaced showing a little girl crushing a baby doll with her foot at an abortion rally in Argentina.

The photo was taken in Buenos Aires at one of the many Feb. 19 abortion rallies in the South American country. The rallies were organized by the National Campaign for the Right to Legal, Safe and Free Abortion. Women and girls at the rallies wore green kerchiefs as a unifying symbol of their support for the killing of preborn children.

It was the girl’s mother who was attending a rally who allegedly posted the photo of her daughter sporting a green kerchief and crushing the baby doll. The girl, who looks no more than 10 years old,  can be seen standing defiantly with her arms crossed while stepping on a partially clothed baby doll that is lying face down on the ground.

Reaction to the photo was swift on social media. The mom eventually pulled the photo.

One Twitter user who posted the photo prior to it being pulled commented: “Ideological fanaticism blinds adults and perverts children.”

Another commented: “I feel very sorry for this girl that the only thing she is doing is to grow up in an environment of violence and internalized hatred inculcated by her own mother.”

Ana Belén Marmora of Argentina’s Youth Front organization told ACIprensa that “there is nothing more discriminatory than abortion, but it is even more aberrant to see such slanted demands that seek to pervert future generations.” She said, “To see a girl stepping on a toy baby should alarm us.”

In August 2018, Argentina’s senate narrowly defeated a bill that would have legalized abortion within 14 weeks of conception. The decision unleashed violent protests in Buenos Aires and elsewhere in Argentina, mobilizing feminists and homosexual groups throughout the country. When pro-life Catholics and other Christians attended a pro-life Mass at the city’s cathedral, pro-abortion forces rioted outside.

Marmora told ACIprensa that abortion advocates are indoctrinating children and turning them into fanatics in the name of freedom for women. “What kind of society awaits us if parents teach their children to step on the heads of other human beings? What future awaits us if we teach our children that the most vulnerable can be thrown out or that violence is a means to justify our desires.” Referring to the young girl, Marmora said, “Just as that mother manipulated her daughter, today there is manipulation of young people in all areas. We should care for young people: they are our future.”

The photo made the rounds while Argentina has been gripped with controversy over the case of an 11-year-old girl who was raped and impregnated by her grandmother’s husband. A court made a finding that both the girl and her mother wanted an abortion because of the rape. On Tuesday, doctors in Tucuman — a province in the north of the country — carried out a Caesarean delivery of a baby weighing 1.3 pounds (600 grams) at 23 weeks gestation. The baby is now in an incubator in intensive care; the baby is not expected to live long. The girl and her mother had approached public health officials in January to solicit the abortion when the unborn baby was at 16 weeks of gestation.