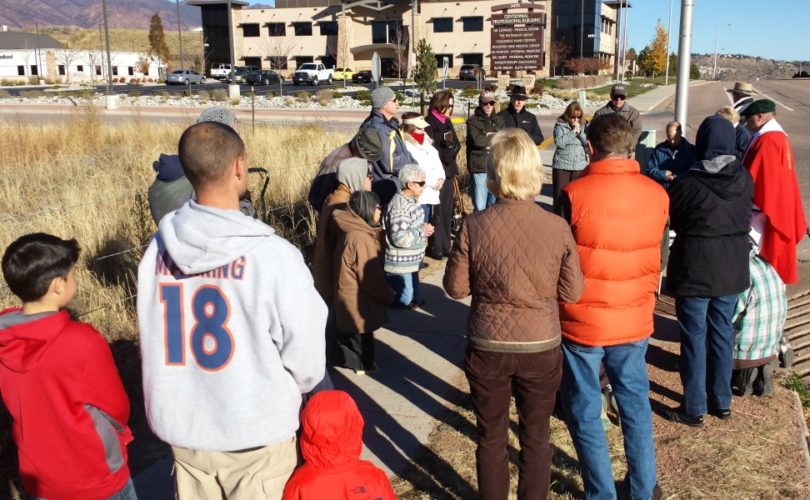 COLORADO SPRINGS, December 2, 2015 (LifeSiteNews) — By now the grey-grizzled mug of Planned Parenthood shooter Robert Lewis Dear has been plastered all over the internet along with statements from the abortion giant saying that the pro-life movement is responsible for encouraging violence through its “hateful rhetoric.”

But as details emerge of the shooter as a deeply disturbed recluse who had little interest in the abortion debate, it becomes harder and harder to lump him in with genuine pro-lifers who love every life and would never advocate violence against anyone. For pro-lifers, every life has value and dignity, including preborn babies, moms and dads, abortion doctors, and yes, even violent men who commit serious crimes. No real pro-lifer would ever condone the abortion of Hitler.

Real pro-lifers who peacefully pray weekly in front of the Planned Parenthood of Rocky Mountains where the shooting took place last Friday say they condemn all forms of violence and were just as shocked as everybody else to learn of the violent rampage that took the lives of three people, none of whom were Planned Parenthood employees.

One pro-lifer, a Catholic priest who visits the clinic every week where he has celebrated Holy Mass — rain or shine — since 1994 told LifeSiteNews that he is personally praying for the shooter’s conversion and that “God will have mercy on his soul.”

Father Bill Carmody, Director of the Respect for Life Office in the Catholic Diocese of Colorado Springs, said the difference between what he and other fellow pro-lifers do in front of the Planned Parenthood center compared to the shooter did is “obvious.”

Father Carmody called it “very disingenuous” of Planned Parenthood to lump in pro-lifers like himself and those who attend his weekly service with the shooter.

Bob Enyart, a spokesman for Colorado Right to Life, located in Denver, told LifeSiteNews exactly what he and his group does when they gather near the Planned Parenthood center.

“We offer the moms help. We tell them there are people who will love them with their child and that they don't have to kill their child to be loved and accepted,” he said.

Enyart, whose group has visited the center “dozens of times,” said that women who decide against abortion because of the pro-lifers’ presence will often approach the group to accept its offer of help. The pro-lifers offer to help the woman find a doctor if she doesn’t have one already, set up prenatal visits, and even accompany her through labor and birth. They direct the women to pro-life services that can help her find a job, provide housing, and offer baby items, such as diapers, clothing, and food.

Enyart said the pro-life group has documented in its history about 1,000 “confirmed saves” where he said the moms have personally told them that if the pro-lifers had not been there praying at the abortion clinic, there would have been nothing stopping the mom from entering the building and going through with the procedure.

“After a child is born, the mom will often come back to the abortion mill on their kid’s birthday, sometimes for years afterwards, with a heart of gratitude that their child is alive, and they’ll thank us for having been there,” he said.

The pro-lifer called the shooter the “enemy.”

One local pro-lifer, Joseph Martone, who visits the Planned Parenthood Center three times a week, but was not there on the day of the shooting, told LifeSiteNews that there is a “big difference” between what he does at the abortion mill and what the shooter did.

“Pro-lifers don't resort to violence. As much as I despise Planned Parenthood, and trust me I despise them, I would never do such a thing. Even though that side has called us pro-lifers, and particularly me, a bully, and that I bully people into not having abortions, that's just not true. They say that because I push the envelope and I step into the street and I hand out literature, and I get people to call me, and I meet with people, and I buy them a bite to eat, and I have a conversation, and hopefully they will not have an abortion,” he said.

Martone said pro-lifers “despise” Planned Parenthood because of how it rips families apart by targeting the child in a mother’s womb for death.

“I despise Planned Parenthood because of what they're doing, namely abortions. They don't care about life. They are hurting these women. They are stopping families from growing. They are breaking up couples. Obviously, they're killing the babies and selling the body parts. Everything they stand for is just not the right thing.”

“If they were even remotely a good health facility, there would be a huge number of adoptions that would be associated with their service. But there’s not. This shows the big difference about who they are.”

Martone said he also despises what the shooter did since pro-lifers are about saving lives, not ending them.

“I definitely despise with the gunman did. He obviously did the wrong thing,” he said.

Martone said that even though the values of pro-lifers are diametrically opposed to those of the shooter, many people, spurred on by Planned Parenthood, will mistakenly believe the lie that the shooter is a “crazy pro-lifer.”

“And we are going to look bad in the long run. We are certainly going to be affected out there for a long time,” he said.

Despite this, Martone said that his resolve to keep on praying in front of the abortion mill a few times a week would not be dampened.

“I still have to do it. I have experienced too many good things to stop. It's one tough calling, but I know that God wants me to do it. When I am down and out, God gives me the strength to carry-on,” he said.