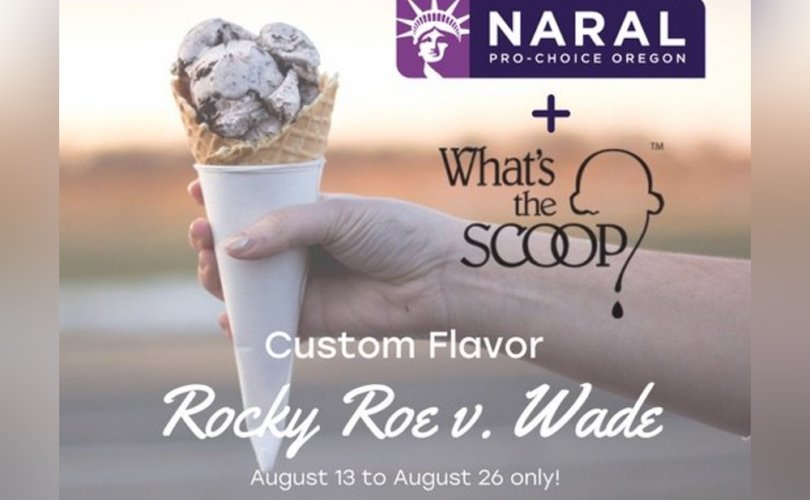 NARAL Pro-Choice Oregon partnered with What’s the Scoop, a company that touts its “Virtuous Scoop” practice of donating a portion of its proceeds “back to the community,” the group announced Thursday. Named after the 1973 Supreme Court case that forced all fifty states to allow most abortions, “Rocky Roe v. Wade” is being sold until August 26, with sales helping “defend reproductive freedom.”

The #SaveRoe hashtag indicates the push is also meant to help generate opposition to the confirmation of Judge Brett Kavanaugh, whom President Donald Trump has nominated to the Supreme Court and is considered a likely vote to overturn Roe.

Jonathan Lockwood, a Portland-based policy consultant and advisor, blasted NARAL for the “disgusting” stunt in a pair of Medium posts, in particular calling out NARAL Oregon executive director Grayson Dempsey.

On Twitter, Dempsey has mocked pro-life critics for “freaking out” about the ice cream, and accused pro-lifers of “shaming women and terrorizing local businesses” in response to Lockwood’s initial criticism.

“What have we come to when aborting 8 month pre-born babies or aborting babies because they’re little girls, is one acceptable, but worse, two is celebrated!” Lockwood wrote on Medium. “I thought I was pro-choice when I came to Oregon, but after seeing first-hand how insidious this far-left agenda has become I am embarrassed to call myself pro-choice.”

“At least the ad doesn’t have a little girl taking a bite out of ice cream cone,” Dave Andrusko of National Right to Life News wrote. “I guess even NARAL draws the line somewhere.” Relevant Radio’s Patrick Madrid called the new ice cream “the flavor of death.”

Pro-abortion figures and organizations often come under fire for promoting abortion and contraception in ways pro-lifers say trivialize both subjects, such as Planned Parenthood ads declaring a right to “safely f*** whoever the f*** we want” and comedian Michelle Wolf joking that abortion “should be on the dollar menu at McDonald’s” and pro-lifers shouldn’t “knock [abortion] 'till you try it.”

“It’s time to put this business and this abortion group on blast,” Lockwood declared. “What’s the Scoop’s phone number is 503-719-5308.” The company’s full contact information can be found by clicking here.

Oregon currently has no pro-life laws on the books, funds abortions with taxpayer dollars, and is currently under the control of a pro-abortion legislature and Democratic Gov. Kate Brown, an openly bisexual former abortion lobbyist. Pro-life activists in the state hope to ban taxpayer funding of abortion this fall with a ballot initiative, however.