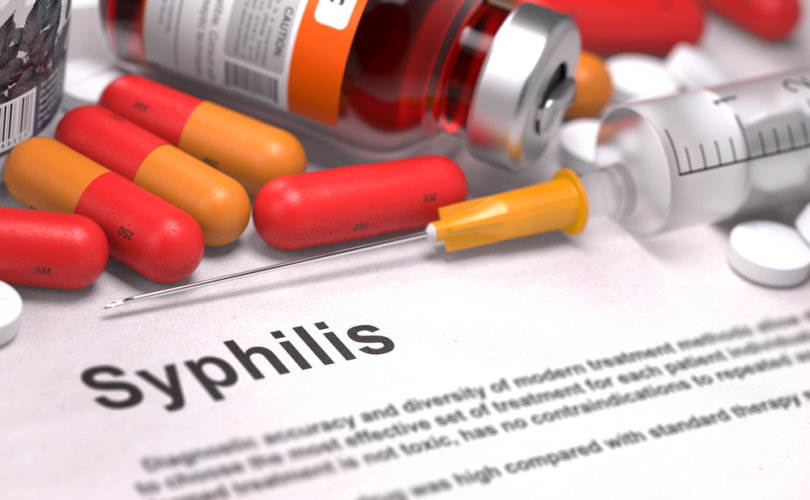 May 23, 2016 (LifeSiteNews.com) – A sharp increase in the incidence of syphilis in the U.S. and Canada has led health authorities in both countries to warn of a shortage of the antibiotic Bicillin and the Canadian Public Health Authority to call for it to be reserved for pregnant women.

The U.S. Centers for Disease Control and Prevention based in Atlanta issued their advisory on April 29, reporting the shortage nation-wide of Bicillin or Benzathine penicillin G, which it said was not only “the recommended treatment for syphilis” but “the only treatment option for pregnant women infected with or exposed to syphilis.”

Both American and Canadian health authorities blame the rise in STD infection on the increase in anonymous sex facilitated by social media.

Its Canadian counterpart went further, recommending supplies be doled out first to pregnant women with syphilis, then to infected men who could not be relied upon to submit to less effective and more onerous treatment regimes, and third to pregnant women in recent contact with infected men.

“There is no satisfactory alternative to penicillin in pregnancy; strongly consider penicillin desensitization in patients reporting anaphylactic reactions to penicillin,” the Canadian advisory stated.

Ironically, 97 percent of people with syphilis are men, according to the Vancouver Coastal Health Authority, and more than 90 percent are “men who have sex with men.” The rise in syphilis infections in Vancouver has led the authority to launch an ad campaign via buses, bulletin boards and dating sites urging men having sex with men to get checked for STDs every three months.

Syphilis in pregnant women can injure or kill their unborn babies. But the penicillin alternatives to Bicillin involve daily intravenous injections. Bicillin requires one injection, though it still carries the risk of sending pregnant women into shock.

The rise in syphilis is international. An Associated Press story earlier this year reported a “national spike” in syphilis in the U.S. but focused on a 128 percent increase in Las Vegas over the past three years.

Both American and Canadian health authorities blame the rise in STD infection on the increase in anonymous sex facilitated by social media. A recent outbreak of gonorrhea in Alberta led its chief public health officer, Karen Grimsrud, to tell a late April press conference, “The use of social media to make an anonymous connection, very quickly, we believe is driving this particular outbreak. When people don’t know their sexual partners’ identities, it makes it difficult for public health to contact partners, as far as setting up testing and treatment.” Alberta has experienced an 80 percent increase in gonorrhea from 2014 to 2015, with the trend continuing upward this year.

A 2011 article co-authored by the U.S. National Library of Medicine and the National Institutes of Health about a general drug shortage in America indicated it was international, growing, and attributable to many factors including problems with manufacturing and distribution, natural catastrophes, government price restraints and fluctuations in demand.