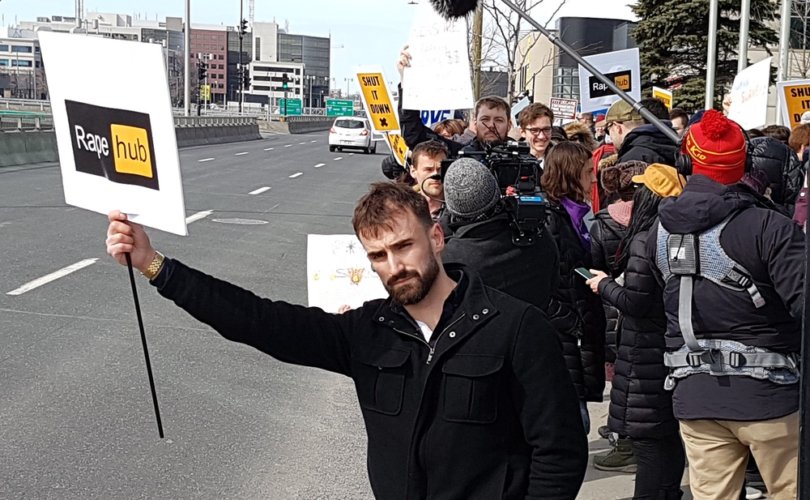 “Is your pleasure really a worthy $$ for her freedom?” was the message on another.

Many carried signs with messages simply saying “shut it down.”

News has now resurfaced that the girl, who was missing for more than a year before her mother identified her in online pornographic photographs, was forced to have an abortion by her male abductor.

According to thorn.org, an online platform fighting child pornography, “more than 30 percent of victims are now being recognized in public,” said Louby, an intervention counselor at La Sortie, a Montreal support center for victims of sexual exploitation.

“Sex trafficking is so lucrative it has now become the second most criminal activity in the world,” she told the crowd.

According to a Traffickinghub press release, “PayPal recently pulled its services from the site amid evidence surfacing that over 118 instances of child sexual abuse were found on the site by the Internet Watch Foundation. These instances are seen as just the tip of the iceberg.”

“I do not advocate myself shutting it down,” she said.

“Shut it down!” yelled someone in the crowd.

“Shut it down! Shut it down!” people chanted after the senator finished her short address.

His conversation with John-Henry Westen about his investigations into the history and people behind the shadowy company can be viewed here.