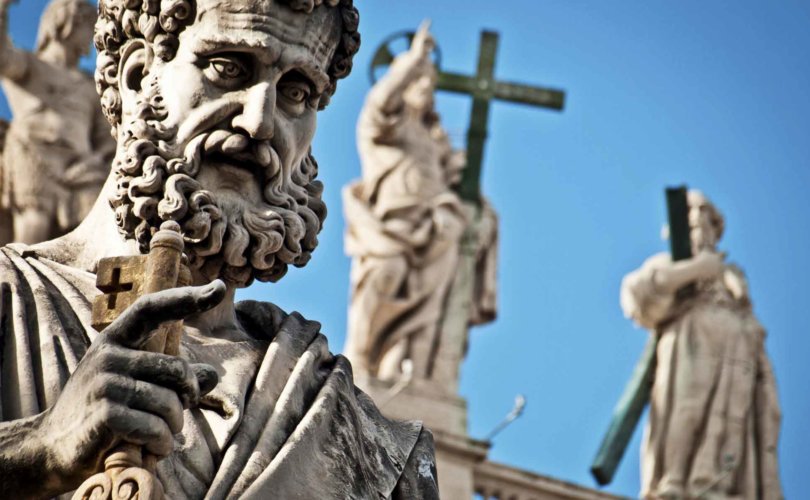 This correction, charging Pope Francis with permitting the spread of seven heresies, at least by omission, about “marriage, the moral life, and the reception of the sacraments,” has clearly been making a massive worldwide impact.

Nevertheless, some articles, such as that which appeared in the National Catholic Reporter, have suggested that the correction is nothing important, made by “really marginal figures” of little standing.

“Since I have given my own life to the priesthood exclusively for the salvation of souls, I had to add my name to the Correctio.”

The director of the Holy See Press Office, Greg Burke, also seemed to downplay the document’s importance. On Monday, he responded to reports in the Italian press that the Vatican had blocked access to the website of the “filial correction” on its computers.

“You can’t really imagine we would do this [block the website] for a letter with 60 names,” he joked to the Italian newspaper Il Giornale.

Even senior officials at the Vatican believe a response is not warranted, the National Catholic Register’s Edward Pentin reported on September 26, partly because they say it has been signed by only a relatively small number of Catholics they consider not to be major names.

Nevertheless, this story is evolving fast. In the first 72 hours since the correction was made public, the number of signatories has more than doubled, rising from 62 to 146. The rate doesn’t seem to be slowing down.

LifeSite spoke to Father Andrew Pinsent, Research Director of the Ian Ramsey Centre for Science and Religion at Oxford University, who has been one of the latest signatories and who is currently lecturing at venues across Latin America.

“I signed the Correctio Filialis De Haeresibus Propagatis, not due to a lack of filial respect for the Holy Father, but because of the gravity of the situation,” Fr. Pinsent told LifeSiteNews.

Although the number of initial signatures of the original document was quite modest, it must be understood in terms of the wider context of what is happening in the Church.

“The Correctio is a next step, consistent with the teaching of Jesus Christ (Matt 18:15-17) and St. Paul confronting St. Peter (Gal 2:11), that follows a series of unanswered petitions since 2015,” Fr. Pinsent said.

He added: “These petitions have included one with nearly 800,000 signatures from 178 countries and including 202 prelates prior to the ludicrously manipulated ‘Synod on the Family’; the appeal of the 45 scholars, prelates, and clergy to the College of Cardinals to repudiate what are widely perceived as erroneous propositions in Amoris Laetitia; the dubia of the four cardinals, whom the Pope did not even have the courtesy to meet; and the statement of the confraternities representing thousands of priests worldwide.”

Commenting on what’s at stake, Fr. Pinsent said: “As Prof. Josef Seifert, friend of St. Pope John Paul II, warned recently, before being sacked for making this warning, we are facing the risk of the total destruction of the moral teachings of the Catholic Church.”

“I add that the contradictions now being introduced deny reason, which is contrary to the heart of Catholic theology, the examples of great saint scholars like St. Thomas Aquinas, and the consistent teaching of our two most recent popes. Such divisions of faith and reason are catastrophic for the Church’s mission of the salvation to souls.”

“Since I have given my own life to the priesthood exclusively for the salvation of souls, I had to add my name to the Correctio.”

The story is evolving in other ways as well. The original correction did not include any bishops in full communion with the Church, a fact that has also been cited as a reason to dismiss its importance. Nevertheless, as LifeSite reported on Monday, Bishop emeritus Rene Henry Gracida, 94, of Corpus Christi, Texas, has also added his name to the signatories.

Bishop Gracida was known to be a close friend of Mother Angelica and an effective communicator of the Church’s teaching on divorce and remarriage.

Update 7:53 PM EST: The organizers of the Filial Correction are warning of a “fraudulent” effort to undermine their initiative after one of the individuals on the new list of signatories publicly announced he had not signed. See here for more.

New Signatories of the Filial Correction

The list of original signatories is at the bottom here.

Prof. Neri Capponi
Former Professor of Canon Law at the University of Florence,
Judge of the Tuscany Ecclesiastical Matromonial Court

Dr. Nikolaus Staubach PhD
Professor at the University of Münster