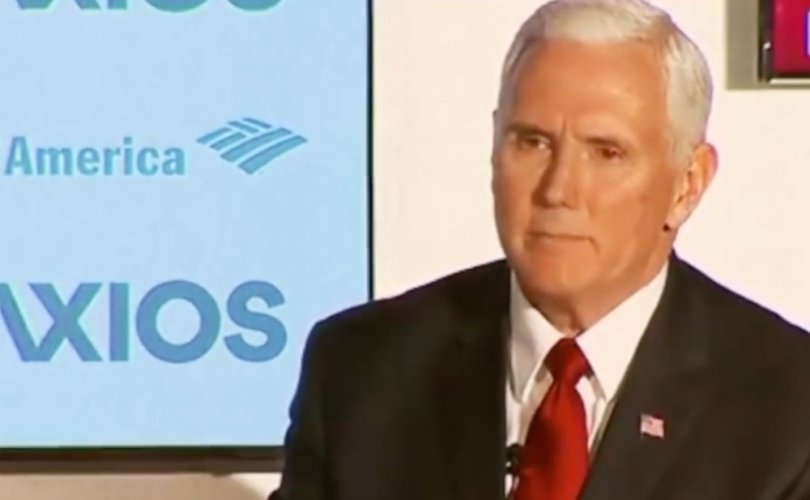 In very somber but not angry tones, the Vice President told Mike Allen of Axios, “ABC has a program that compared my Christianity to mental illness. I’d like to laugh about it, but I really can’t.”

“I’m a believer,” the Vice President said Wednesday. “Like tens of millions of Americans today will have ash on their forehead to mark the beginning of Lent. An overwhelming majority of Americans cherish their faith… But I have to tell you, to have ABC maintain a broadcast forum the compares Christianity to mental illness is just wrong.”

The day before, talk show participants on The View discussed the comments of former White House staffer Omarosa Manigault Newman, who disparaged the Vice President on the reality TV show “Celebrity Big Brother.”

“As bad as you think Trump is, you (should) be worried about Pence… Everyone that is wishing for impeachment might want to reconsider,” Newman said.  “He (Pence) thinks Jesus tells him to say things.”

The View panelists went on to mock Pence. “It’s one thing to talk to Jesus. It’s another thing when Jesus talks to you,” Joy Behar ridiculed.  “That’s called mental illness, if I’m not correct, hearing voices.”

Sonny Hostin chimed in, “I’m Catholic, I’m a faithful person, but I don’t know that I want my vice president speaking in tongues.”

Speaking before a live Axios audience to Allen, the Vice President responded that The View’s deriding his Christianity is “an insult not to me, but to the vast majority of the American people who like me cherish their faith.”

“My Christianity is the most important thing in my life,” Pence stated.  “I try and start every day by opening the Good Book. My wife and I try and have a prayer together before I leave every morning. I can honestly tell you my faith sustains me, in all that I do, and it’s just a regular part of our lives. But I’m not unusual. I think I’m a very typical American. Whatever your faith tradition, people understand that.”

The former Indiana governor went further to criticize mainstream media for its anti-Christian bias. “I just think it demonstrates just how out of touch some in the mainstream media are with the faith and values of the American people that you could have a major network like ABC permit a forum for invective against religion.”

“I call them out on it,” Pence concluded, “not because of what was said about me, but it’s just simply wrong for ABC to have a television program that expresses that kind of religious intolerance.”

“We’re better than that. Our country’s better than that,” Pence said. “I’d like to be light about it, but I really can’t –not for my sake, but for the tens of millions of Americans who cherish their faith, I just, I can’t be silent.”