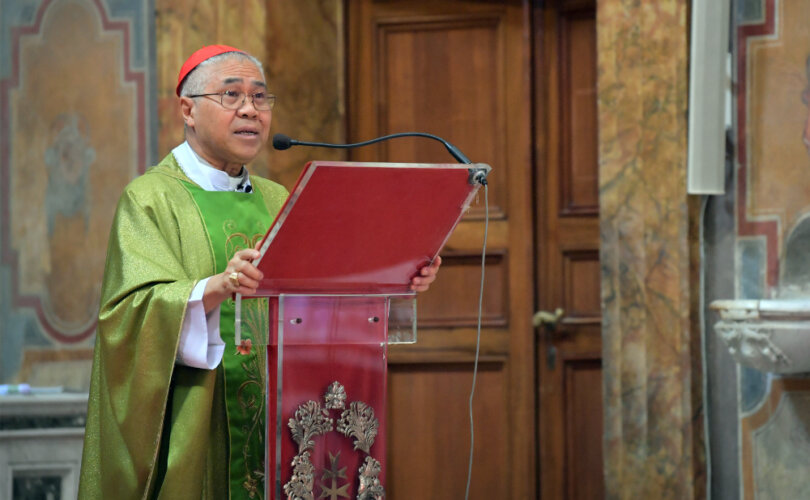 Cardinal William Goh of Singapore, who has taken varying positions on repealing the law against homosexuality.Screenshot/CatholicSG Flickr

SINGAPORE (LifeSiteNews) — Singapore has decriminalized homosexual acts while at the same time amending the nation’s constitution to protect marriage as solely between a man and a woman, but critics warn the new definition could yet be enlarged to include same-sex relationships.

On November 29, the parliament in Singapore voted to decriminalize Section 377A (S377A), meaning that homosexual acts between men are no longer against the law. S377A had been in place since 1938, when Singapore was under British rule.

Earlier in 2022, the Supreme Court’s Court of Appeal had ruled that S377A would remain in place for the time being, but could not be enforced to prosecute men for homosexual acts. A June 2022 poll found that 44 percent of Singapore residents supported keeping S377A, with 20 percent opposing the law’s retention, and 36 percent not taking a position.

While S377A was repealed on Tuesday, the parliament also voted to amend the country’s constitution to protect the current legal definition of marriage as being between a man and a woman.

According to Reuters, Prime Minister Lee Hsien Loong and his successor have “ruled out any changes to the current legal definition of marriage as being between a man and a woman.”

However, the constitutional amendment reportedly does allow room for future room for changes to be made to the definition of marriage.

“By accepting homosexual acts as a social norm, the dreadful consequences for the stability of our families, the well-being of our children, and the risks to the common good will be long-term and irreversible,” he wrote, adding:

until and unless Parliament puts in place a formulation that more perfectly encapsulates the spirit of the law, guaranteeing the protection of the rights of the majority who favor the traditional family, and that no further demands be made to legalize same-sex unions, adoption of babies by same-sex couples, surrogacy, or to criminalize those who do not support the homosexual lifestyle, I am of the view that S377A should not be repealed under the present circumstances.

In recent months Goh has expressed more of a compromising approach to the law and the LGBT movement.

In a July interview with Vatican News following the announcement of his reception of the cardinal’s hat, Goh repeatedly highlighted the theme of “compassion.”

“I like the Holy Father’s emphasis on compassion and inclusivity,” said Goh, before emphasizing this inclusion for the divorced and LGBT groups. “Everybody must somehow be embraced by the Church, whether those who are divorced, those who are LGBTQ, those who are on the peripheries, the poor. And I think this is what the Church is all about.”

In an August press release, Goh then signaled that he had dropped his former blanket opposition to repealing S377A, taking a slightly more nuanced position. “We do not seek to criminalize the LGBTQ, for they too are children of God and loved by Him,” he opened.

The cardinal noted that “we seek protection of the family and marriage according to natural law; and our rights to teach and practice them unhindered.” With this in mind, he warned that “we must not allow reverse discrimination to take place against those who believe in marriage as defined between a man and a woman.”

He called for this definition of marriage to be “enshrined and defined in our Constitution before S377A is removed.”

Should this not take place, “we will be taking a slippery road of no return, weakening the fabric of a strong society which is founded on the bedrock of holistic families and marriages,” warned Goh.