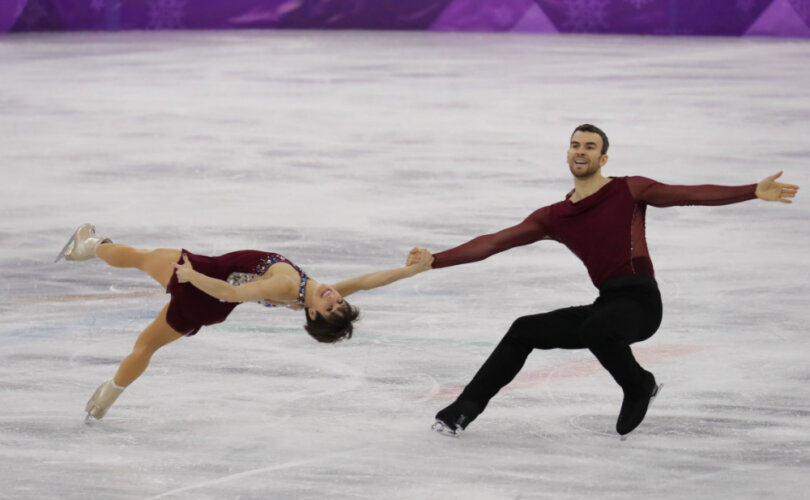 Bronze medalists Meagan Duhamel and Eric Radford of Canada perform in the Pair Skating Free Skating at the 2018 Winter Olympics.Shutterstock

(LifeSiteNews) — Canada’s governing body for figure skating was blasted for going full woke with so-called gender “ideology” after announcing it has banned the use of both “man” and “woman” from its official vocabulary for pair and ice dance team skating.

Skate Canada’s Equity, Diversity and Accessibility Operating Committee now says that its definition of “team” is no longer a woman and man because those terms are discriminatory. Rather “team” means any “two skaters” and is now the term that must be used.

President Karen Butcher of Skate Canada said in a December 12 press release that the change is about “removing barriers to participation in skating, and we believe it will have a significant impact in ensuring all gender identities are recognized and accepted equally and without prejudice.”

The change says Skate Canada will now allow “for new and exciting partnerships in the pair and ice dance disciplines to compete at the national level.”

In essence, biological males or females who call themselves transgender will now be openly allowed to compete as “pairs.”

Others, including Sale, lampooned Skate Canada by bringing up the 2006 movie “Blades of Glory,” which poked fun at the idea of having two male skaters compete as pairs.

“Figure skating will be turning into drags on ice. Any one of those pairs will have a definite advantage due to woke judges. Won’t even matter if they are better. Not important anymore. Your wokeness score is what matters today,” tweeted a user with the handle, JustinsClownWorld.

Others brought up the more practical aspects of having biological males compete as “pairs.”

“We all know that biological men are physically stronger. It’s just the way it works. The point here, for me is that allowing a trans women to compete as a pair with a biological man is adding an unfair advantage based on physical strength. Just my opinion,” Twitter user Suzy tweeted in reply to Sale.

Since 2018, Skate Canada has allowed same-sex partners to compete in the pairs’ competition. However, the new change pushes forth the gender-ideology agenda further still.

The International Skating Union, which oversees most international competitions, has not changed course by going woke with removing “man” and “woman” from its pairs skating. This means Skate Canada’s new woke rules only apply to domestic competitions.

There has been a notable push in recent years by many western nations, especially in the United States and Canada, to actively promote transgenderism in young people, including children.

Recently, Prime Minister Justin Trudeau’s federal government doubled down on its promotion of the LGBT agenda, announcing $100 million in funding for activist groups within the movement.

Just recently, a former analyst for the Royal Bank of Canada (RBC) told LifeSiteNews that large companies often involve themselves with these radical movements not because they necessarily support them but because the current economic structure – in particular the widespread use of Environmental, Social and Governance (ESG) scores – makes doing so profitable.