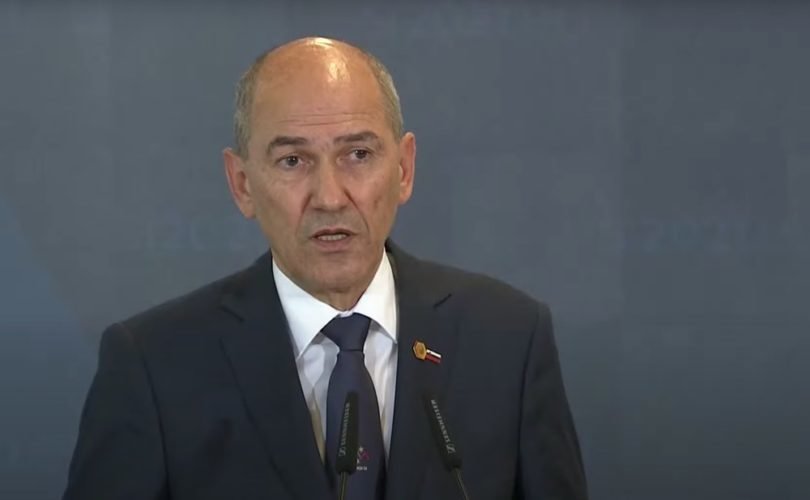 During a joint press conference with European Commission President Ursula von der Leyen, Janša emphasized the importance of respecting the differences and national sovereignty of each member state.

“There are differences that need to be taken into account and respected and I think there’s a clear division between national and European competences,” he said.

“If you now judge a person based on imaginary European values which everyone perceives differently, and dual standards are used, then I think that this is the fastest road to collapse.”

Hungary’s controversial law was passed at the Hungarian National Assembly on June 15, with 157 votes to one. It generated heated debate at the EU summit two weeks ago, with a number of prominent EU leaders expressing their disapproval.

This included European Commission President Ursula von der Leyen, who qualified the Hungarian bill as “a shame” and said that it “goes against all the fundamental values of the European Union.” This opinion was also expressed by German Chancellor, Angela Merkel who said in a statement to the Bundestag: “I believe this law is wrong. It is incompatible with my idea of politics.”

The mid-June debate took an even more controversial turn when Prime Minister Mark Rutte of the Netherlands stated: “It’s my intention on this point to bring Hungary to its knees.” He even went as far as to suggest that Hungary should either “accept LGBT rights” or “leave the EU.”

Emmanuel Macron took a more cautious approach to the question, stating: “We now have democratically elected leaders supported by their people who are taking decisions which are against the fundamental values of Europe. This is no simple issue.”

In response to Rutte’s suggestion that Hungary should leave the EU, the French president added: “When you have an issue with a member state, you solve it by maintaining contact. If you exclude someone as soon as there is a problem (…) you will lead people (…) to think that their values are closer to the values of conservative Russia (…) What a regression!”

Last week, Poland seemed to be the only EU member state to back Hungary. The nation’s education minister, Przemysław Czarnek, told Polish conservative magazine Sieci on Monday that “we should copy these regulations on Polish soil in their entirety!” But with Slovenia assuming the rotating presidency of the Council of the European Union last Thursday, Hungary may have found a significant new ally.

— Article continues below Petition —
PETITION: Stand with Hungary for protecting children from LGBT propaganda
Show Petition Text
44479 have signed the petition.
Let's get to 45000!
Thank you for signing this petition!
Add your signature:
Show Petition Text

Beginning his presidency of the Council, the Slovenian prime minister expressed his concerns for the stability of the Union over issues such as these, echoing president Macron’s statement on the danger of excluding member states from the political arena. In doing so, Janša made an obvious reference to Brexit.

In 2015, Slovenia went back and forth over the question of so-called LGBT rights. A law legalizing same-sex “marriage” and adoption by homosexual couples was passed in March of that year.  It was overturned following a popular referendum which took place that December.

A bill was eventually passed in 2016 allowing civil unions, granting all privileges of marriage to same-sex couples with the exception of joint adoption. A petition for a second referendum was launched, but this time it was not allowed to go ahead, and the bill eventually passed into law.

The will of the Slovenian people, clearly expressed in the December 2015 referendum, echoes that of many other central European nations on LGBT issues, including same-sex “marriage” and adoption by same-sex couples.  These nations include Croatia, Hungary, Poland, Slovakia, Romania, Bulgaria, Latvia, and Lithuania.

In addition to their take on LGBT issues, these countries share strong historical and cultural similarities. All are currently EU member states, all were once part of the Soviet Bloc, and many are historically Christian nations that witnessed a strong resurgence of Christian and conservative values in their social and political life following the fall of the Soviet Union. This phenomenon can also be observed in Russia.

This shared identity has created a rift between western EU member states and the rest of the EU which French president Macron described as a new “East-West divide” at the EU summit.

In a gesture of solidarity towards Hungary and Poland, Slovenian Prime Minister Janša insisted on the value of central and eastern European countries for the EU, stating: “The EU without central Europe is not a European union – it will be just a shell and we should all be aware of it.”