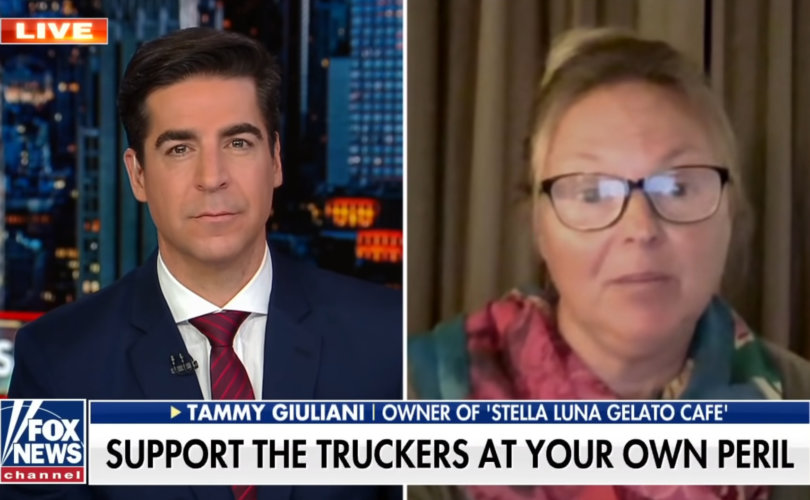 OTTAWA, Ontario (LifeSiteNews) — The owner of a gelato shop in Ottawa recently told Fox News about the ordeal she endured for making a $250 donation to the trucker convoy.

Tammy Giuliani of Stella Luna Gelato Café gave to the effort after she “heard a group of people were willing to drive all the way across the country in below 30 [degree] weather to gather peacefully in front parliament and stand up for their beliefs.”

Giuliani’s business includes her husband, children and a son-in-law. It’s been targeted with threats from people calling her a “Nazi” for the donation after someone leaked donation information.

“I think never in my 56 years have I ever experienced a country so divided, so full of hatred toward friends and neighbors,” Giuliani said.

“You know, they may have opinions that differ from theirs, but they’re so willing to publicly shame and humiliate and spew forth angry vitriol,” she said. “We have been called terrorists. For the first 36 hours, we were inundated with hatred, with threats of violence.”

“We’re coming to get you … We’re going to throw bricks through your window,” people would call and say, according to Giuliani. “You’ll pay for this, you Nazi supporter.”

“I personally have been called a ‘disgusting pig of a woman’ and that I should rot in hell,” the small business owner told Fox News host Jesse Watters. “Our rural shop out in Merrickville, Ontario, someone draped a large bedsheet over our sign.”

She began to break down in tears. “It’s been a tough few days.”

But she struck a resilient tone.

“The sign read ‘Tammy supports terrorists,’” Giuliani said. “Now, Mama Bear is going to dig out her claws on that one, and we’re getting the video surveillance of the incident, and we will pursue that with the police.”