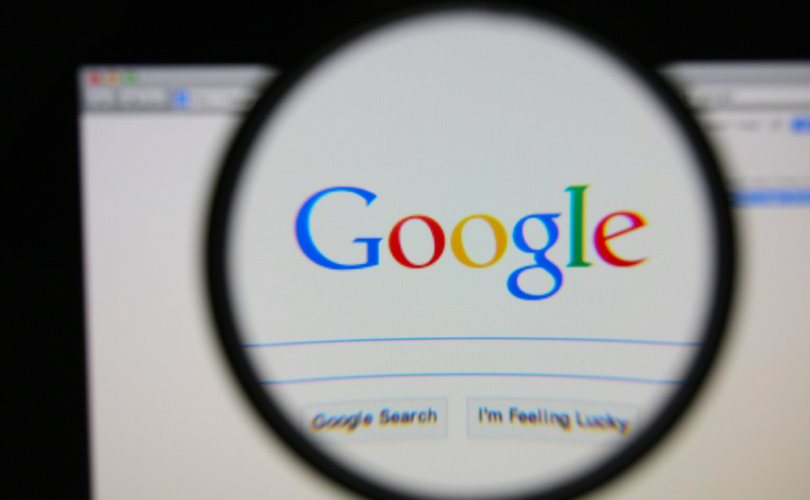 August 16, 2019 (LifeSiteNews) – A prominent tech expert and longtime critic of Google says that Project Veritas’ latest report on the internet giant provides “smoking gun proof” that Google's CEO and other leaders have lied under oath to Congress in denying that the internet's top search engine engages in blacklisting in other censorship practices – practices that one whistleblower says amounts to “tampering with the elections to essentially overthrow the United States.”

On Wednesday, the conservative investigative group released an interview with senior software engineer Zachary Vorhies, who has been the source of numerous leaks over the past several months, as well as a trove of more than 950 documents shedding light on Google’s blacklists and other censorship practices.

“I gave the documents to Project Veritas. I had been collecting the documents for over a year,” Vorhies explained. “And the reason why I collected these documents was because I saw something dark and nefarious going on with the company and I realized that they were going to not only tamper with the elections, but use that tampering with the elections to essentially overthrow the United States.”

Later that day, Breitbart’s Rebecca Mansour and Joel Pollak interviewed Robert Epstein, a research psychologist with the American Institute for Behavioral Research and Technology, to discuss the revelations. Epstein is the researcher behind estimates that Google may have swung as many as 2.6 million votes to Democrat Hillary Clinton in 2016.

Epstein’s primary takeaway: “I told you so.”

“His set of documents actually includes two blacklists,” he explained, one for websites and the other for search terms. “Google’s leaders who testified before Congress — one of them right in front of me just a few weeks ago — have been denying that they have blacklists. Well, they can’t do that anymore. They’ve also said over and over and over again in response to my research, ‘We never do reranking of search results.’ These documents show beyond any doubt whatsoever that Google has teams that do reranking of search results.”

“They actually do reranking of search results to suit their needs, political and otherwise. It’s called the ‘Twiddler’ system,” he continued. “One of the documents is called the ‘Twiddler Quickstart Guide,’ and it explains how various teams have access to very specialized software that allows them to […]  literally rerank search results to meet their ever-changing needs, and some of those needs are political needs.”

“It’s smoking gun proof that their leaders — including their CEO — have been lying under oath when they’re giving sworn testimony before Congress,” Epstein told Breitbart. “I sat there on July 16, at a hearing of the Senate Judiciary where I testified, and I heard Google’s representatives say, ‘We have no blacklists.’ Well, you know what? I’ve got two of them, right here, two actual blacklists.”

During the hearing, Google vice president for government affairs and public policy Karan Bhatia insisted, “we do not utilize blacklists or whitelists in our search results to favor political outcomes.” Last December, Google CEO Sundar Pichai claimed in sworn testimony it was “not possible” for employees to “manually intervene on any particular search result.”

“I’m like a kid in a candy store because I’ve been saying these things and writing about these things since 2012, and for years no one paid any attention to me,” Epstein said. “This is real and Google’s leaders have been perjuring themselves before Congress.”

Individuals who perjure themselves in congressional hearings are rarely punished, though Rep. Louie Gohmert (R-TX) said in January that “if Mr. Pichai lied to Congress, he was under oath and it would be a criminal matter for a Grand Jury.”

The latest revelations add to the case conservatives have been making since 2016 that the internet giant has a left-wing bias and discriminates against conservative and pro-life groups. Numerous leaked private conversations appear to show not only that the dominant ideologies at Google are dramatically out of step with the country at large, but that the company is willing to enforce those ideologies through its ostensibly neutral services and platforms.

During his July testimony, Epstein proposed a two-pronged solution: a “worldwide network of passive monitoring systems” to “instantly spot” partisan practices at websites like Google, and legislation “to declare Google’s massive search index – the  database  the  company uses to generate search results – to be a public commons, accessible by all, just as a 1956 consent decree forced AT&T to share all its patents.”

This, he said, would “quickly give rise to thousands of search platforms like Google.com, each competing with Google, each providing excellent search results, each serving niche audiences, large and small, exactly like newspapers and television networks and websites do now. Search will become competitive, as it was during its early years, and democracy will be protected from Google’s secretive machinations.”