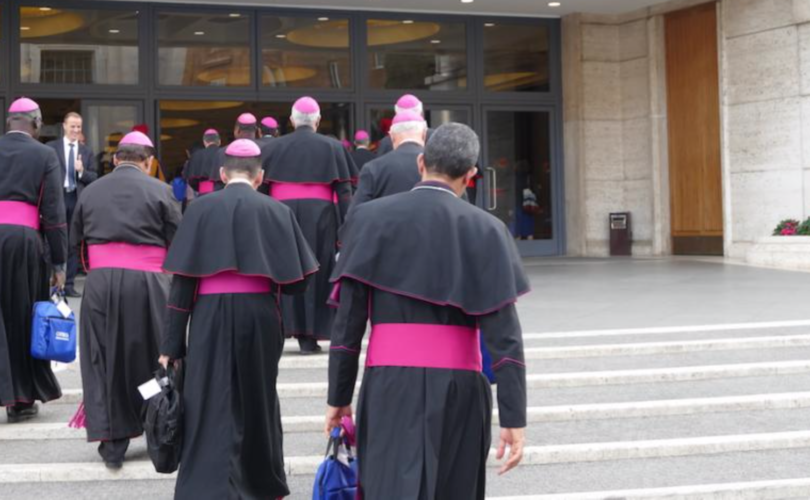 ROME, October 25, 2018 (LifeSiteNews) — A two-fold effort is underway to smuggle the “LGBT” acronym and ideology into the final document for the Vatican Youth Synod, LifeSite has learned.

Informed sources close to the synod have told LifeSite that the draft of the final document has resurrected and enshrined the much-disparaged working document (Instrumentum laboris), which contains the loaded acronym “LGBT.” Paragraph 197 of the Instrumentum laboris reads:

Some LGBT youths, through various contributions that were received by the General Secretariat of the Synod, wish to “benefit from greater closeness” and experience greater care by the Church, while some BC ask themselves what to suggest “to young people who decide to create homosexual instead of heterosexual couples and, above all, would like to be close to the Church.”

The inclusion of “LGBT” was roundly criticized by Archbishop Charles Chaput in his synod intervention, and has received strong push-back from the synod fathers of Africa.

LifeSite has been shown the draft of the final document. In an introductory paragraph, the drafting commission clarifies the relationship between the Instrumentum laboris and the final document, saying they are intrinsically linked and are to be read together.

This is what is known as a “chapeau paragraph.” It is a technique used in consensus documents at the UN and other international institutions. A chapeau is often the first paragraph in a document in order to set the whole tone. The draft’s inclusion of the Instrumentum laboris in this way implies that it is accepted as a whole, and sets the interpretative framework for the final document.

In other words, including the Instrumentum laboris in a chapeau means that “LGBT” has made it into the draft final document, albeit in a more hidden and subtle way.

Therefore, while veteran Vaticanist Sandro Magister reported yesterday that Pope Francis has “hit the brakes” on the inclusion of “LGBT,” the draft final document suggests that someone on the drafting commission has smuggled it in.

The second way the “LGBT” ideology has made its way into the draft final document is through the use of the term “sexual orientation,” which is the UN equivalent of “LGBT.”

For the homosexual lobby and the UN, “‘LGBT’ = ‘sexual orientation’,” a source noted.

The term “sexual orientation” appears three times in the final document draft. In the first instance, the document says young people want openly to discuss “sexual orientation” and homosexuality. Amid changing ways of living out affectivity and multiple moral perspectives, it notes that young people value authenticity and fidelity. It also calls for a deepened anthropology, theology and pastoral care, but never references Pope John Paul II’s extensive analysis on human sexuality, Theology of the Body.

In a second instance, the draft says the choice to remain single can be based on a variety of reasons, including religious, social, or “sexual orientation.”

A third paragraph reiterates the call to develop a deepened anthropology and theology on questions of “sexual identity,” adding that it must be done in a context of synodality. It speaks of God’s love for every person and the Church’s commitment to fight discrimination and violence based on “sexual identity.”

Echoing a recent address by Pope Francis’ secretary to the C-9 council of cardinals, the paragraph added that is not appropriate to define persons solely on the basis of their sexuality.

“No amount of chastity insertions will undo the use of the term ‘sexual orientiation,’” an informed source close to the synod told LifeSite. “When the final document comes out, everyone — including the ‘LGBT’ lobby groups — will do a ‘Control F’ search for ‘sexual orientation,’” they added.

A certain omission of terms in the final document is also raising concerns. In a paragraph on the difference between male and female, the draft says that Sacred Scripture presents the sexual difference as both fundamental to the human being and elusive. Citing Genesis, it says that man and woman are called to live together in dialogue and communion, but it makes no mention of marriage.

Concerns over the inclusion of the “LGBT” acronym or other similar language is heightened by the fact that the final document coming from the synod will purportedly be magisterial if approved by the Pope.

In article 18, nos. 1 and 2 of the newly issued apostolic constitution, Episcopalis Communio, it is stated that after a synodal document receives express approval from the Roman Pontiff, the document participates in the Ordinary Magisterium of the Successor to St. Peter.

“Unfortunately, this is a cynical and political move that tries to create Catholic Tradition by fiat,” one Rome-based theologian told LifeSite. The theologian explained:

Episcopalis Communio undermines the perennial communion of the saints in the Tradition of Faith by legislating a pretense—as if a teaching becomes part of Catholic teaching simply because the Pope and some bishops say so. But popes such as Liberius and Honorius have supported doctrinal or moral errors, and the acts of Synod of Pistoia (1786) were later condemned as erroneous and dangerous to the faith (1794). The work of the authentic Magisterium is to transmit the deposit of Faith as handed on by the apostles and their successors throughout the ages, not to create novelties that are little more than doctrinal wolves in sheep’s clothing.

On Friday, the drafting commission will finish amending the text, before presenting the final document to the Synod Fathers for a vote on Saturday. A two-thirds majority of 267 voting members of the Synod will be needed for each paragraph to pass.