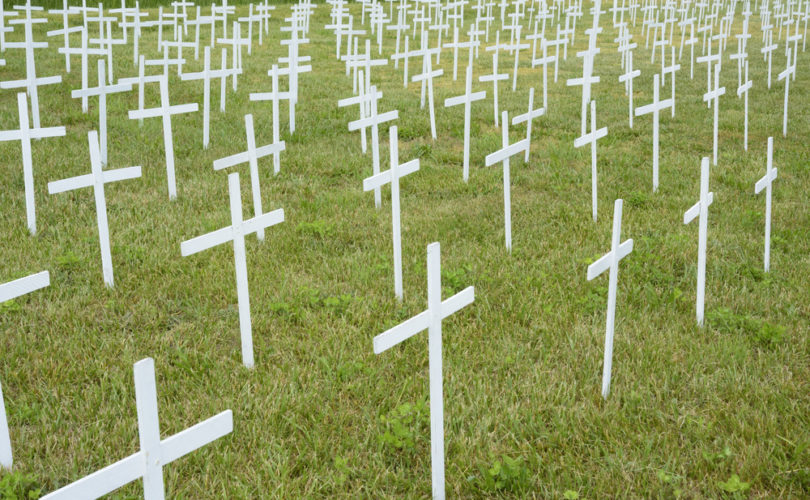 January 4, 2019 (LifeSiteNews) – The popular “fact-checking” website Snopes has once again waded into the abortion debate, this time suggesting it’s medically inaccurate to descirbe abortion as “death.”

Over the past week, multiple outlets including LifeSiteNews covered the year-end global tally of abortions estimated by the statistics tracking service Worldometers, which found that more than 41 million induced abortions had occurred in 2018. The reports noted that this makes abortion the leading cause of death worldwide, exceeding the combined deaths attributed to cancer, malaria, HIV/AIDS, smoking, alcohol, and traffic accidents.

On Thursday, Snopes published an article questioning that assessment. The piece agrees that, assuming the numbers are accurate, “it would be true that the number of abortions worldwide outnumbered overall deaths from heart disease and stroke, the top two causes of death that year,” but takes issue with the statement’s characterization of abortion.

“Stating that abortion is the ‘leading cause of death’ worldwide (as opposed to a medical procedure) is a problematic pronouncement, because that stance takes a political position, one which is at odds with the scientific/medical world,” Snopes’ Bethania Palma Markus wrote. “The medical community does not confer personhood upon fetuses that are not viable outside the womb, so counting abortion as a 'cause of death' does not align with the practices of health organizations such as WHO and the Centers for Disease Control and Prevention (CDC).”

Markus also cited Guttmacher Institute public policy director Heather Boonstra as declaring abortion a “legal, constitutionally protected medical procedure” that is “not considered a cause of death by CDC, WHO and other leading authorities.”

The author described Guttmacher merely as a “reproductive health research organization,” however, and did not mention the group’s pro-abortion bias or origin as Planned Parenthood’s research arm. She also neglected to mention that WHO is not impartial on abortion, and its endorsement of abortion as “family planning” is a relatively recent and controversial development.

While it is true that the CDC describes abortion neutrally, it also doesn’t list the practice as an aspect of “women’s reproductive health.” Additionally, its primary roles are combatting disease and providing health information to lawmakers and the general public, so its mild handling of abortion says little about the nature of the procedure.

Markus next cited two articles asserting that the “legal, philosophical, religious, and scientific arenas provide no definitive answers as to when personhood begins,” but neither she nor the quotes she selected seriously grapple with the science of embryology.

In fact, long-settled biological criteria and numerous mainstream scientific and medical textbooks established that a living human being is created upon fertilization and is present throughout the entirety of pregnancy. Merriam-Webster’s Medical Dictionary defines death as the “irreversible cessation of all vital functions especially as indicated by permanent stoppage of the heart, respiration, and brain activity: the end of life.”

Many abortionists and some pro-abortion activists admit all of the above. They typically defend abortion by claiming preborn humans lack human rights and/or drawing a philosophical distinction between humans and persons (arguments pro-life philosophers have extensively challenged), but typically don’t dispute that death is involved.

“Clinging to a rhetoric about abortion in which there is no life and no death, we entangle our beliefs in a series of self-delusions, fibs and evasions,” leading feminist author Naomi Wolf admitted in 2013. “We need to contextualise the fight to defend abortion rights within a moral framework that admits that the death of a foetus is a real death.”

Curiously, Markus concluded the article by citing claims that fetal personhood laws could somehow lead to prosecuting women for miscarriages, a topic that has no bearing on the question of whether abortion kills a living human being.

“Pretending that a unique life isn't ended by abortion is the kind of misinformation groups like Snopes are supposed to debunk,” Students for Life of America president Kristan Hawkins told LifeSiteNews. “Saying that abortion is merely medical ignores the impact of that procedure on a human being. Just because abortion vendors end the lives with surgery and drugs doesn't change the fact that someone ceased to live.”

“Abortion being the leading of cause of death is a political statement and is the truth,” Patrina Mosley, the Family Research Council's director of life, culture, and women’s advocacy, said. “The fact that this many innocent lives have been taken and it’s perfectly legal, should alarm us and begs the question, what are we going to do about it? The last time it was legal to do this we called it the holocaust.”

“Embryology answered the question of when a human being’s life begins long ago. An embryo, even a single-cell embryo, is a living being distinct in every way from his or her mother. That is the simple science,” said Dr. Grazie Pozo Christie, a policy adviser with the Catholic Association. “The fact is that abortion ends the life of a human being in his or her early stages of development, at the rate of over 50 million beings a year. Ischaemic heart disease and stroke comes in at 15.2 million yearly, a distant second.”

Snopes originally rose to prominence as an entertaining resource for confirming or debunking urban legends, but as political “fact-checking” gained popularity over the years it grew increasingly liberal, and its reliability increasingly disputed.

In April, Washington Times contributor Robert Knight fact-checked Snopes’ defense of legislation in California that would have banned not just treatment but speech regarding unwanted homosexual attraction.

“In December 2017, Forbes ran a piece that concluded Snopes has major credibility problems such as: David Mikkelson’s ‘responses regarding the hiring of strongly partisan fact checkers,’” Knight wrote. “On the Snopes website, the 'About Us' section lists David Mikkelson solely as founder, with no mention whatever of co-founder (and ex-wife) Barbara Mikkelson, who has been tossed down the memory hole.”