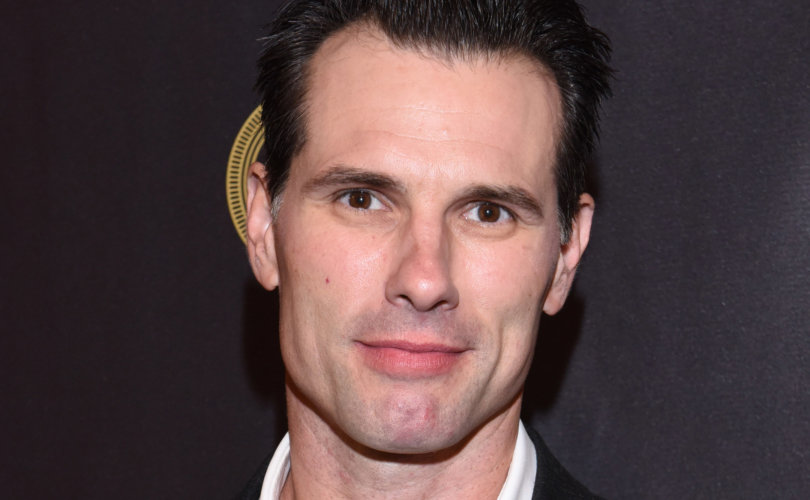 (LifeSiteNews) — In a just-released video interview with LifeSite’s John-Henry Westen, daytime TV star Austin Peck — who over the years has been a regular fixture on As the World Turns and One Life to Live — talked about what it’s like to have strong convictions concerning protecting the rights of the unborn and standing up to COVID tyranny in the very pro-abortion, COVID-fear-peddling Hollywood.

From ‘hedonist’ to traditional Catholic

“Once I became a Catholic, I had to look back and I realized, you know, what was my belief? What did I really believe before I started to believe in Christ?” said the actor. “I realized I was a hedonist. That’s what I was. I lived for pleasure.”

The actor recounted that as a young man swept up in the fashion industry, he “used to club every night.” The presence of “drag queens and transvestites” was “normal.”

“By the time I was 21, I’d already traveled most of Europe and many other places, so it was a bizarre kind of reality. I started to live in New York, and I started to ask cosmic questions like, ‘What’s the meaning of life?’”

He said that after he had begun attending an evangelical church something happened. He realized “that Jesus was who he said he was,” and that “the Bible was the word of God.”

Peck credits conversations with his sister as being instrumental in the growth of his faith.

“She was giving me Catholic truth, and the Catholic truth was filling in all of these theological holes that Protestants couldn’t answer,” he explained.

Peck said that when he went to a Latin Mass, the Gospel suddenly made more sense. “The Bible blew up and I went, ‘Here’s the torn curtain [in the temple]. Here’s the New Covenant consistent with the Old. Here’s where Christ is the sacrificial lamb. And the reverence, the holiness.’”

“The only thing they have is name-calling: ‘You’re a man. You’re a bigot.’”

“We’re evil for pointing it out. But that’s just demonic. It’s just a demonic tactic. It’s just a diabolical disorientation,” Peck went on to say. “What is abortion but modern-day sacrifice to Molech or Ba’al” asked Peck. “I mean, those demons still exist.”

The Hollywood actor talked about abuse by duplicitous politicians engaging in fear mongering regarding mask mandates, and how hard it is to dissuade others from their irrational fears.

Paying the price for speaking the truth: ‘I may never work again’

The actor has put his money where his mouth is.

“I love acting. I really do. I’ve been in the business since I was 16,” said the actor who is now 50. “I’ve worked consistently since then: In the fashion industry, television, movies. I’ve done theater, plenty of commercials, and fashion prints. So almost everything outside of the big budget film and starring in my own prime time series, I’ve done.”

Yet, “I may never work again,” said Peck.

Take a stand, You are not alone

“The reason why evil is able to prevail in many ways is because good people don’t do anything about it. But it’s really hard to do something about it when you feel like you’re all alone,” said Peck.

In closing, Peck spoke about the imperative for people to take a public stand for truth and against the tyranny that is at all of our doorsteps.

In our own lives, we [may] find ourselves being the bad guy, going along with, you know, the people in Germany that said, ‘hey, what happened to the Schwarz’s?’

‘I don’t know. They got taken away last night. … ‘Let’s not do anything, just keep our heads down.’ And that’s going on right now.

The bullies are only able to bully because there’s enough people that are afraid to do anything. They work on fear.

“Don’t let the people around you that are taking a stand be alone,” urged Peck. “Stand with them.”