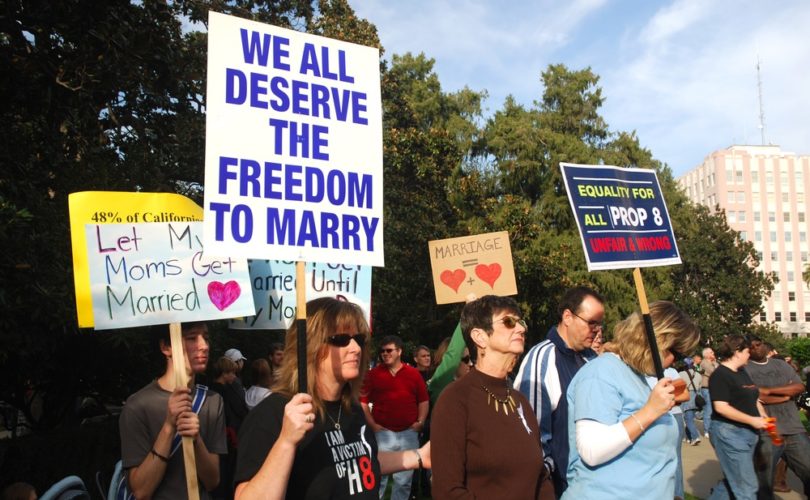 The Family Research Council's Travis Weber told LifeSiteNews that “for a lot of us, religious liberty's only been a hot-button issue recently, we're seeing in the news. Why is that? It's driven by agendas affecting matters of sexuality – marriage, abortion, contraception, and all sorts of other issues.”

“So what do we do about this? Some of these claims are going to be dealt with in the courts. Others, though, we need to deal with [inaudible] protections. Where's the threat right now? It's on anyone doing business with the government, having indexes with the government, those getting tax-exempt status, contracting, getting grants, etc.”

“And those folks need to be protected with a version of the federal First Amendment Defense Act, or state government non-discrimination act, not other areas, such as pastor protection act, or some focus that doesn't need protection right now.”

Weber's co-presenter was Ashley McGuire of The Catholic Association. “We were discussing threats to religious liberty,” she explained. “I focused on the threats facing health care workers and religious people who do not wanted to be conscripted into providing drugs and devices that violate their consciences.”

McGuire cited the Little Sisters of the Poor case, slated to be heard by the Supreme Court later this month, and two other cases she said “really embody where things are going through the courts.”

Asked about a prediction for the Supreme Court's decision on the Little Sisters' case, McGuire said, “It's impossible to predict. I think people are cautiously optimistic that this should be such a no-brainer – I think we're hoping for another Hosanna-Tabor.”

Hosanna-Tabor is a 2012 Supreme Court ruling that concluded that religiously affiliated groups can hire and fire ministers and other certain employees without interference from the government.

“We're cautiously optimistic that even without Justice Scalia's vote, the Court will still uphold religious liberty, but it's going to be complicated if we end up with a 4-4 ruling because of the split Circuit Court decisions. So there's a lot at stake.”

McGuire expressed confidence that, as expressed to LifeSiteNews by the Log Cabin Republicans at CPAC and former presidential candidate Carly Fiornia on the campaign trail, the redefinition of marriage and religious liberty can coexist.

“I think [The Heritage Foundation's] Ryan Anderson's made the case very well – we just had the decision by the Supreme Court, the Court has ruled that states don't have a right in defining marriage, but we should be able to coexist,” she said. “That people who maintain their traditional view of marriage can coexist alongside those who don't, and we have a system of government that can continue to defend religious liberty.”

Weber disagreed. “The answer is, they can – the question is, will people who believe in gay rights want them to? To give credit to some, they do. Some people have come out said, 'Look, we just want the government to recognize same-sex marriages. We don't to force everyone to believe our point of view.'”

“However, you have very powerful groups – Human Rights Campaign and others – pushing legislation who don't subscribe to that view and would make everyone agree with them if they could. So the real question is, what will happen in practice … [regarding] the movement, speaking generally, of those pushing gay rights in various contexts. I'd love to partner with people who differ with me on this matter of sexuality but want to support religious liberty. This is important for pluralism, for the continued function of democracy, and people with different views living together.”

Weber said laws like the First Amendment Defense Act that provide protections for religious groups and individuals don't just provide bastions for liberty – they enhance liberty for all.

“When we talk of bastions, what I'm interested in is protections for people to be free. Who needs them right now? The government is not cutting off people from grants and contracts because they're supporting same-sex marriages. We pass laws to protect people, not to just make a statement.”

“The First Amendment Defense Act, the state versions, are necessary because the freedom of people who the traditional marriage view is threatened,” he continued. “We're not interested in making the government enforce our view of morality in terms of cutting off the other side from making its own debate. So I think there's a lot to this question – we need to look at who's being threatened, protect them, and then when you look at religious freedom laws – which, FRC supports religious freedom for all in all contexts – RFRA doesn't discriminate, and protects everyone, no matter the context.”