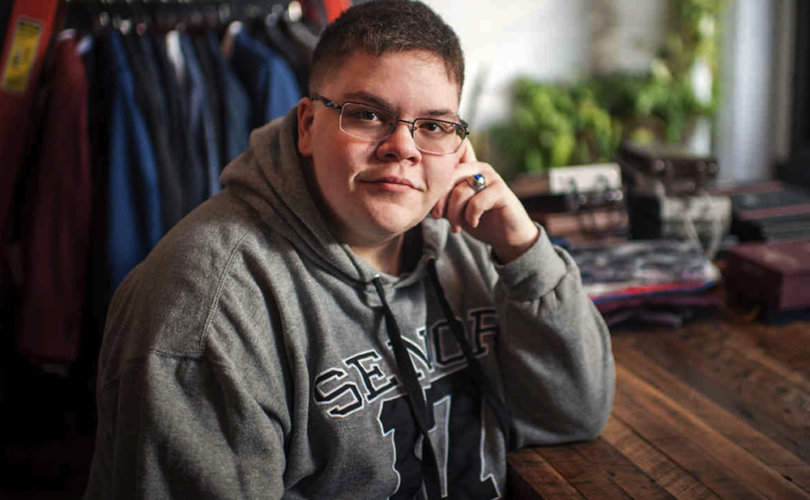 WASHINGTON, D.C., March 6, 2017 (LifeSiteNews) — Reaction was swift and impassioned from both sides after the Supreme Court decision Monday to vacate the case of a gender-confused female student demanding school accommodations to live as a “boy.”

The high court ruled that it will not hear a “transgender” case brought by Gavin Grimm, a gender-confused Virginia teenager who identifies as “male” and wants to use boys' school restrooms at her high school. The Supreme Court vacated and remanded Gloucester County School Board v. Gavin Grimm back to the Fourth Circuit Court of Appeals “for further consideration.”

The directive was issued “in light of the guidance document” from the Trump administration reversing one from Obama that pushed schools to let “transgender” students use opposite-sex restrooms and locker rooms.

“This is happening because Trump removed protections that were already in place. I'm mad as hell & you should be too,” tweeted self-styled “queer writer” James Michael Nichols, using the #GavinGrimm hashtag. Nichols is “Queer Voices” deputy editor at the liberal Huffington Post.

Tony Perkins, president of the Family Research Council (FRC), had quite a different take.

“We are encouraged that policymakers and the Supreme Court are increasingly skeptical of the federal government forcing boys and girls to shower together, room together on school trips, and use the same locker rooms and bathrooms,” Perkins said in a press release.

Grimm’s ACLU lawyers based their appeal in part on Obama’s radical interpretation of Title IX, a 1972 education law designed to eradicate “sex discrimination” in schools. In the school mandate and other policy areas, Obama and his appointees sided with LGBT activists to expand the interpretation of “sex” to gender-confused individuals demanding accommodations for their self-declared “gender identity.”

Federal civil rights (nondiscrimination) laws do not include “gender identity” or “sexual orientation,” although mostly Democrat-sponsored bills such as the pro-LGBTQ “Equality Act” aim to change that.

Strangely, the attorney for the Gloucester School Board did not ask the Supreme Court to vacate the Grimm case after Trump nixed Obama’s schools mandate, according to pro-family Virginia attorney Bill Olson, who filed amicus briefs on the case at both the Supreme Court and Fourth Circuit Court level.

“Once President Trump withdrew the Obama guidance letter, there really was no reason for the case to continue.  We were shocked when the lawyer for Gloucester County agreed with the lawyer for the ACLU that the Supreme Court still should decide the case,” Olson told LifeSiteNews. “Fortunately, today cooler heads prevailed, with the High Court vacating and remanding the Fourth Circuit's terrible decision.”

Confused girl Grimm “knew he was a boy”

Gavin Grimm will be graduating from high school this spring. According to a sympathetic story in The New York Times, Grimm “said he knew he was a boy ‘as soon as I was aware of the difference between boys and girls.’” His mother, Deirdre, is backing his court challenge.

The ACLU summarized the background of Grimm’s case as follows:

“As part of Gavin’s medical treatment for severe gender dysphoria, Gavin and his mother notified administrators of his male gender identity at the beginning of his sophomore year so that he could socially transition in all aspects of his life. With permission from school administrators, Gavin used the boys’ restroom for almost two months without any incident. But after receiving complaints from some parents and residents of Gloucester County, the school board adopted the new policy [mandating that students use bathrooms matching their birth sex] on December 9, 2014, by a vote of 6-1, despite warnings from the ACLU.”

“The Supreme Court has provided good news to parents and students concerned about privacy and safety in school showers, locker rooms and bathrooms,” FRC’s Perkins said. “In light of the Obama edict being withdrawn and this case now remanded, we are cautiously optimistic that the Fourth Circuit Court of appeals will reverse itself.”

He approvingly cited the earlier 2016 Fourth Circuit opinion against Grimm, in which the court stated that it would “leave policy formulation to the political branches” because “the weighing of privacy interests or safety concerns was not to be left ‘to the courts.’”

Sarah Warbelow, legal director of the pro-LGBTQ lobby Human Rights Campaign, said, “To be clear, transgender students are covered by Title IX and are entitled to the same rights and protections as every other student. But while this plays out in our courts, we are deeply concerned about the consequences this could have for transgender students, who may not be aware of their rights or be subject to increased discrimination by others who feel emboldened by the Trump administration’s recent actions.

“Now more than ever it is crucial for all of us to affirm to transgender students that they are equal, they are valued, and there are millions of people across our country who will have their backs, no matter what,” Warbelow said.

But Don Blake, chairman and president of the Virginia Christian Alliance, said that while gender-confused students like Grimm deserve care and compassion, “Government should not be in the business of normalizing a mental illness, especially through the schools.”

Echoing the American College of Pediatricians, Blake told LifeSiteNews that from a parent’s perspective, “it is child abuse to enable and encourage a child” like Grimm not to “grow up in her natural gender.”