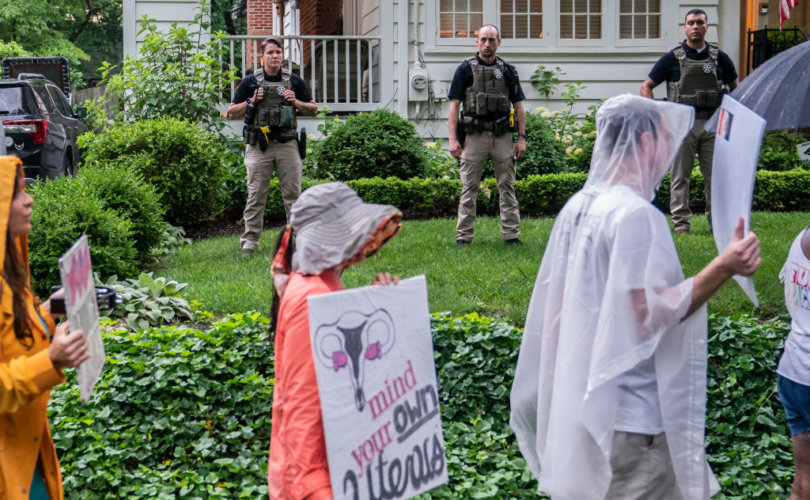 (LifeSiteNews) — Social media posts have been inciting violence against the pro-life Supreme Court Justices, even suggesting that pipe bombs be sent to their homes.

A top post this week on socialist subreddit r/WorkersStrikeBack published the addresses of Supreme Court Justices who voted to overturn Roe v. Wade, while discussing retaliation such as hunting the Justices down at their churches and sending them dangerous substances, as reported by Blaze Media.

r/WorkersStrikeBack describes itself as a “leftist, anti-capitalist, socialist subreddit that is dedicated to support worker strikes, protests and unions all over the world, (that will) address the obvious problems related to an average worker’s workplace, offer advice to a fellow worker struggling with their workplace problems and mock or satirize any kind of anti-worker sentiment.”

The post was removed after it had been up for over 22 hours. It received nearly 27,000 upvotes in the online socialist community of 97,000 users. The post received over 2,000 comments, with some suggesting violence against the pro-life justices.

“Find their churches,” one Reddit user wrote. “The area they live in is super wealthy and they all definitely are part of local bloated churches. Find their churches, they can never be free, because you can track when they’re home by when they go to their local church.”

One user, apparently a mailman, asked his fellow readers not to send dangerous things to Supreme Court Justices in the mail.

“Socialist mailman here, please don’t send anything that could hurt your mail handlers,” the Blaze said he wrote. “Accidental tearing happens to mail all the time. I would encourage more direct action at a time like this.”

Another comment apparently stated, “Politicians are way too comfortable in this country when they’re willing to break precedent to go against 70% of the population to fit their own agenda. Maybe it’s time they felt less comfortable and safe.”

But Reddit is only one forum in which angry individuals are indulging in violent fantasies about the pro-life Supreme Court justices. A TikTok comment to a post with Justice Thomas’s picture and address provided the components needed to make a pipe bomb. As the Blaze reported, there are posts on Twitter expressing the desire to send pipe bombs to the Supreme Court justices.

Following the U.S. Supreme Court reversing the almost 50 year old abortion law, pro-life pregnancy centers and Catholic churches have faced violence, vandalism and even arson in the wake of the pro-life ruling.