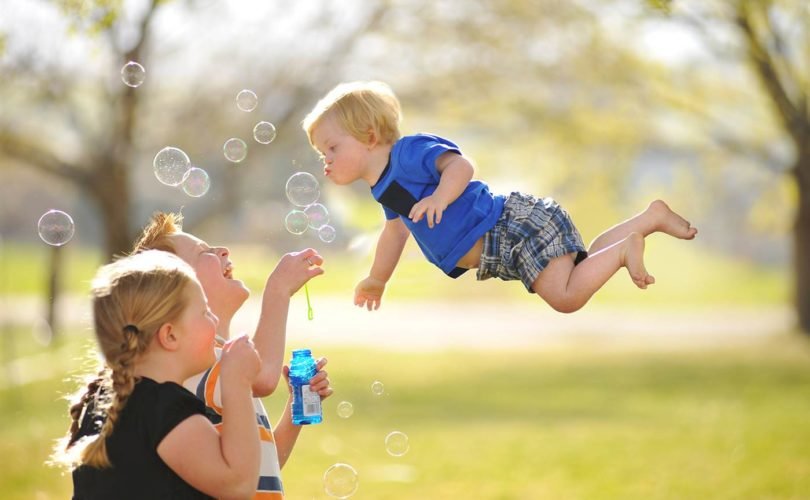 Wil Lawrence of Paradise, Utah, is cropping up in the funniest places. Thanks to his father Alan’s skills with a camera and Photoshop, the 18-month-old boy appears in many candid family shots on his father’s blog, to be flying.

While his sister reads, he hovers above; while his family shops, Wil cruises 10 feet above the supermarket aisle; as his father jogs, he soars beside him.

Lawrence told BuzzFeed News that the idea grew from Wil’s special way of crawling that made it look as if he were getting ready to run down a landing strip.

“It’s just an ongoing joke in the family that one day he is going to take off and fly,” he said.

The “ongoing joke” took on new meaning, as Lawrence and his family accepted speaking engagements to encourage other parents – and expectant parents – with Down syndrome children. “I want other parents just starting out this journey…to have a more positive outlook on it than I did,” he said.

When he learned that Wil had the cognitive condition, “I didn’t take it as well as the rest of the family,” he wrote in his web diary, thatdadblog. “I was really dwelling on what I thought the would be the limitation Wil would place on the family being able to do the things I wanted to, what I’m hoping my kids will be able to do.”

Alan, a professional photographer, was with his wife Nikki and Wil in the hospital, when she asked him why he was crying so much.

He did, and began posting doctored images of his son’s imaginary flights, as well as more reality-based shots of Wil engaging in earthbound activities with the Lawrences and their four other children.

The “Wil Can Fly” pictures proved so popular, they generated international news coverage, national TV network appearances, and a Youtube channel called Bringing Light. They all show a happy, boisterous toddler surrounded by a loving family.

The Lawrences also plan to turn the pictures into a calendar to raise funds for two foundations, Reece’s Rainbow and Ruby’s Rainbow, which foster awareness of children with Down Syndrome. With a goal of $12,500, only a few hundred dollars need still be raised.

The Lawrences have begun working on another project, as well. They are expecting their sixth child. The latest video on Bringing Light shows them viewing the ultrasound together: It’s a boy!

Kari’s son has a super power…Down syndrome
New intern at Vatican Radio is an author, actor and media student… with Down syndrome