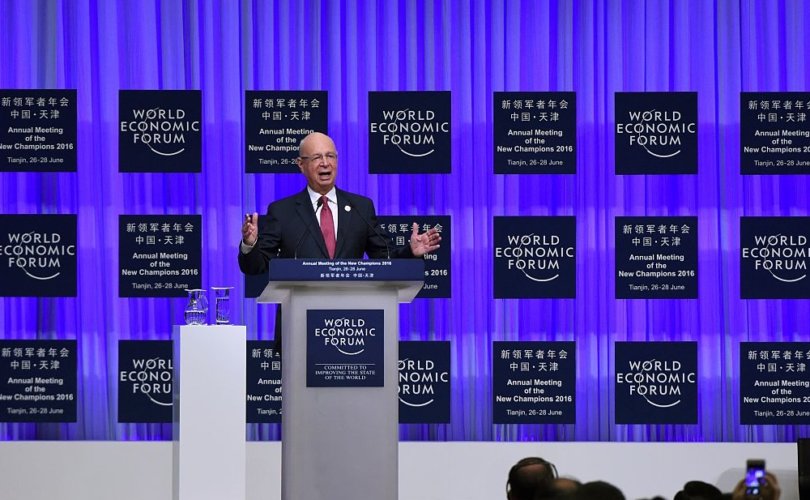 (LifeSiteNews) Editor of The Remnant, Michael Matt, recently brought to light a personal link between the architect of the Great Reset, Klaus Schwab, and a Brazilian archbishop of the Catholic Church.

Schwab is the executive chairman of the World Economic Forum, an organization that focuses on a variety of globalist initiatives, including shaping the “COVID Era,” “shaping the future of consumption,” and “shaping the Future of the New Economic Society.”

An overarching initiative that encompasses the mission of the WEF is the so-called “Great Reset.” Archbishop Carlo Maria Viganò wrote an Open Letter to Donald Trump in October of last year – just before the 2020 election – warning about the goals of the Great Reset. Viganò called the initiative a plan hatched by “a global élite that wants to subdue all of humanity, imposing coercive measures with which to drastically limit individual freedoms and those of entire populations.”

Archbishop Viganò added that “the purpose of the Great Reset is the imposition of a health dictatorship aiming at the imposition of liberticidal measures, hidden behind tempting promises of ensuring a universal income and cancelling individual debt.”

Cardinal Burke also exposed the plans of the Great Reset and linked the advent of the COVID-19 paradigm and the WEF initiative in a homily from December 2020. He said: “Then there is the mysterious Wuhan virus about whose nature and prevention the mass media daily give us conflicting information. What is clear, however, is that it has been used by certain forces, inimical to families and to the freedom of nations, to advance their evil agenda. These forces tell us that we are now the subjects of the so-called ‘Great Reset,’ the ‘new normal,’ which is dictated to us by their manipulation of citizens and nations through ignorance and fear.”

— Article continues below Petition —
Thank Cardinal Burke for defending Life, Family, Freedom and Tradition
Show Petition Text
19634 have signed the petition.
Let's get to 20000!
Thank you for signing this petition!
Add your signature:
Show Petition Text

Michael Matt released a video last year entitled THE GREAT RESET: Davos & the Plot to Cancel Trump wherein he asserts that everyone from George Soros, to Bill Gates, to Klaus Schwab, to Al Gore and the Secretary-General of the United Nations are eager to use the COVID-19 situation as an opportunity to reset the world economy.

According the video, this includes population control, global commerce, “climate change” regulation, education and the UN Sustainable Development Goals in order to “reorder,” “reimagine,” and fundamentally transform every aspect of society.

In his most recent video, Matt outlines intimate connections between Klaus Schwab and Brazilian archbishop Hélder Câmara. Câmara was a Council Father at the Second Vatican Council and was known colloquially as “The Red Bishop” due to his condemnation of the anti-communist stance of the U.S. and his praise of Mao Tse-Tung during the Cultural Revolution, which claimed millions of lives.

In 1967, Câmara said that he was “disgusted with Americans who reduce everything to the problem of birth control” and seemingly left the door open to contraception usage to within his own archdiocese to the “conscience of the individual.”

Câmara was a driving force behind the “Catacombs Pact.” On November 16, 1965 a group of 42 Council Fathers paid a visit to the Catacombs of Domitila on the outskirts of Rome. Bishop Charles-Marie Himmer of Tournai, Belgium celebrated mass for his fellow Council Fathers. Following the Mass, the Fathers composed a text: a set of principles they would agree to adhere to in their ministry. Câmara served as the group’s scribe.

Among the principles stated by the bishops were a series of controversial statements such as: “We reject being addressed either verbally or in writing by names and titles that express greatness and power (‘Eminence’, ‘Excellency’, ‘My Lord’…).” And, “We shall do everything possible to ensure that the leaders of our governments and public services adopt and put into practice the laws, structures and social institutions that are necessary for justice, equality and the harmonious and complete development of the whole human being and of all human beings and thereby for the coming of a new social order worthy of human children and children of God.”

Câmara was a proponent of Liberation Theology and a key contributor to the Second Vatican Council document Gaudium et Spes. Pope Francis named the self-described socialist a “Servant of God” in 2015.

He also had a strong influence on Great Reset leader Klaus Schwab.

In Michael Matt’s video, Matt showed footage of Schwab explaining to a panel of interlocutors the importance of his encounter with the Brazilian archbishop.

Of the encounter, Schwab said: “I give you one example which for me was probably a crucial moment in my life. I traveled for the first time to Brazil, I met a priest who was known at that time as the priest of the poor people, his name was Don Hélder Câmara.”

The chairman of the WEF then explained that Câmara brought him to the slums of Recife, and that he was “so shocked,” and that he had “to invite this Bishop up to Davos to tell the people what poverty is.” Schwab claimed that Câmara was forbidden from speaking in Switzerland because he was “considered to be a communist.”

He then stated that Câmara’s reputation as an anti-capitalist upset many of the companies involved in the Davos event, but that he saw it as a “test” and that he “had to stand” on his values, even at the risk of giving up the WEF. Schwab claims that Câmara’s 1974 speaking engagement went “very well” and that the “audience in Davos listened to him.”

At the event, Câmara called for a higher social responsibility, wealth distribution, and a reassessment of “the false values of a ‘waste society’” to achieve prosperity for all people.

After Dom Hélder Câmara’s participation, Klaus Schwab regularly invited liberal Catholic clerics to Davos. In 1977, Franz Cardinal König, the Archbishop of Vienna, joined the meeting and voiced concerns about mankind’s drive for material wealth, calling for a renewal of society to put faith and love at its core.

This year, Cardinal Peter Turkson addressed the Davos virtual forum. He is the head of the Vatican commission on COVID-19 and has advocated that coronavirus vaccines be made available to all.

Turkson told the Davos forum: “The human person is central to all of this, not simply as the beneficiary, but is also the crucial actor. He must change his lifestyle, he must change his way of thinking, and develop a heart for the other person to be able to feel for the well-being of the other.”