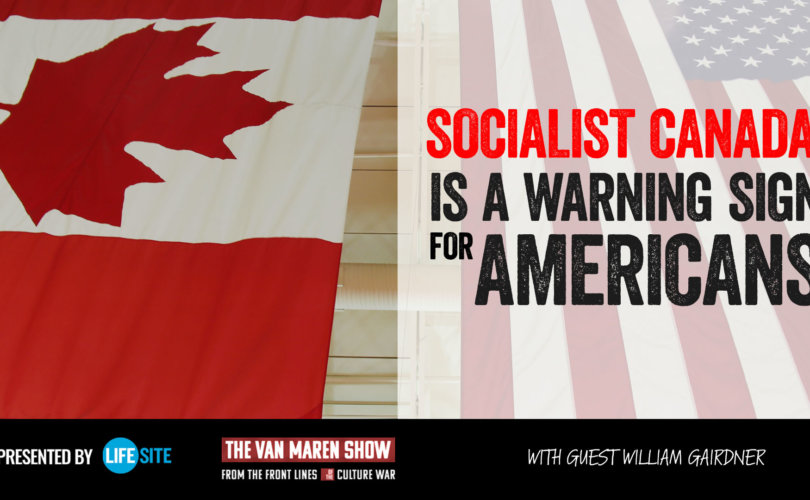 March 25, 2020 (LifeSiteNews) – In Canada, 88% of people do NOT attend a religious service of any kind. After World War II, roughly 66% of Canadians attended Christian services weekly. Sadly, a similar drop in religion was also seen in Sweden. Although Sweden is now considered one of the more godless European countries, it was once a very religious, family oriented society.

What happened to Canada and Sweden? Socialism.

In today’s episode of The Van Maren Show, author of The Trouble with Canada William Gairdner, a Canadian political philosopher, business man, and former Olympian, joins Jonathon to discuss how socialism has taken such a strong hold in Canada and the impacts it has had on the country.

Gairdner and Jonathon discuss not only what Canadians can do, but they see Canada as a warning for the US and other countries that are glorifying socialism.

Gairdner points to Pierre Trudeau’s undermining of the decentralized Canadian political system as the beginning of Canada’s rapid fall into socialism. Prior to Pierre Trudeau, Canada followed a British style constitutional framework, “which gave all the provinces their constitutional obligations and duties and the federal government its obligations and duties and never the twain should meet.”

Pierre Trudeau had a background in a more French code of law with a more socialistic influence. Pierre introduced government healthcare and agreed to subsidize the healthcare costs of the provinces that agreed to mandatory provisions established by the federal government.

When a political leader suggested ‘free daycare for all’, Gairdner got frustrated with the government continually increasing taxes in order to subsidize these programs and wrote to the conservative party.

The note read, “You're too pink. If you don't get more blue, you won't see any more of my green.” His letter made it into the papers and Gairdner couldn’t help but get involved in politics. He did an in-depth analysis of what had/was happening in Canada and wrote The Trouble with Canada.

Gairdner walks listeners through the history of Canada’s founding and the search for freedom that brought the pilgrims to North America. He makes the important distinction that these pilgrims wanted freedom to do good, freedom to follow their religious virtues, not the complete ‘freedom’ of unlimited sex, drugs, etc. that people are seeking today.

Gairdner outlines the progression from the pilgrims to the libertarian socialism that is seen in Canada. A government that lets you do whatever you want personally, pornography, drugs, etc, but is socialistic in all other realms. Gairdner claims that Canadians are freer than they have ever been personally, yet they are willing to put up with being otherwise surrounded by government regulation.

And now, with gender ideology, people are taking this even further and saying their will has the ‘right’ to command their biology.

Gairdner encourages conservative Canadians to pursue what he calls the 4 F’s – freedom, family, free enterprise, and faith. He also encourages people not to be afraid of debate and dialogue, but to truly say what they think. He shares the words of his late father, “Know what you think. Say what you think and do what you say.”

By encouraging dialogue and discussion, people will hopefully start to change hearts and minds.