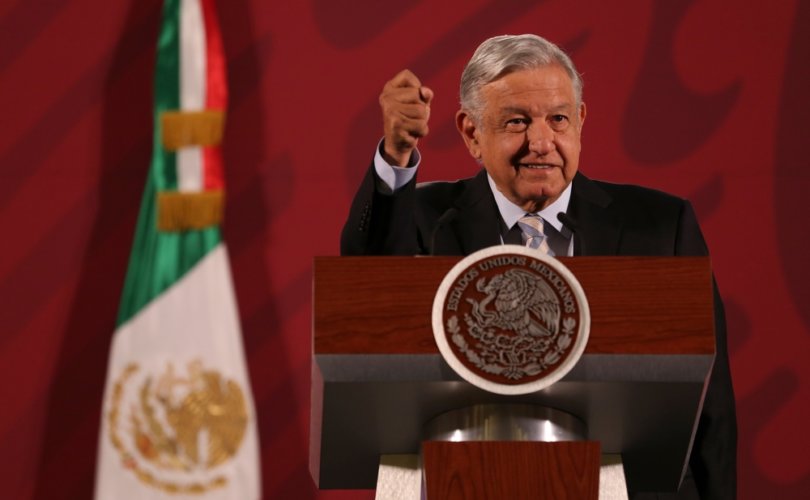 July 4, 2018 (LifeSiteNews) – Mexico’s July 1 elections have delivered an overwhelming victory to a coalition of socialist parties headed by Andrés Manuel López Obrador, often known as “AMLO,” and his National Regeneration Movement, known commonly by its initials “MORENA.” The victory has been perceived as a cause for concern among pro-life and pro-family leaders in Mexico.

The president-elect appears to have won every Mexican state but one, and obtained an absolute majority vote of 53%, the highest vote total of any presidential candidate since 1982.

For the first time since 1997, it appears that a single political coalition will control both the executive branch and both houses of the national congress.

The victory has led to much concern among Mexican pro-lifers regarding the future of the country’s policies with regard to the right to life and the integrity of the Mexican family. Although López Obrador personally has tended to maintain a neutral stance regarding life and family issues, members of his MORENA party tend towards a radical leftism that is strongly sympathetic to legalized abortion and the LGBT political agenda.

The options open to pro-life voters in this year’s election were very limited. López Obrador’s most viable opponent, Ricardo Anaya, allied himself with a strongly anti-life socialist party, expressed acceptance of homosexual “marriage” and only weakly defended the right to life. However, prior to the election a coalition of pro-life activists published a statement endorsing Anaya as an alternative to Obrador.

The group, which called itself “Mexico, the Possible Good,” expressed its concern with MORENA’s perceived anti-life and anti-family tendencies, as well as what it called its “authoritarian populism.” Expressing their support for “respect for the dignity of the human person, for life, the family, religious liberty, and the right of parents to educate their children,” the signatories urged voters to vote for Anaya with the hope that he would be loyal to the pro-life and pro-family principles contained in the platform of his historically more conservative National Action Party.

Nonetheless, it seems far from certain that AMLO and MORENA will prove themselves to be strong opponents of life and family in the coming six-year presidential term.

Under López Obrador’s leadership, MORENA has entered into a coalition with the mostly Evangelical Protestant party “Social Encounter” (Encuentro Social), which unambiguously opposes abortion as well as homosexual “marriage.” The presence of the party in the coalition has raised eyebrows among AMLO’s own rank and file.

López Obrador himself has repeatedly said that he is respectful of all points of view on life and family issues, and ultimately intends to decide his policies regarding them by means of some form of consultation with citizens. He sees his alliance with the Social Encounter party as part of that consultative process.

The president-elect has called himself a “Catholic” in the past, although he prefers to refer to himself as a “Christian,” a term that seems calculated to endear him to the country’s Protestant minority.

López Obrador will begin his presidency on December 1, 2018.