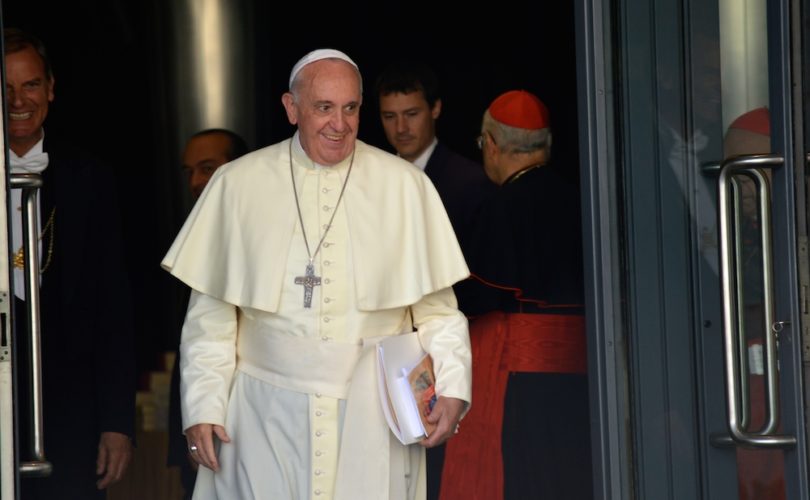 ROME, June 3, 2015 (LifeSiteNews.com) — In an audience with a group of seriously ill children and their parents on Friday afternoon in the Vatican’s Chapel of Santa Marta, Pope Francis offered them words of encouragement in their suffering, and reiterated the Church's teaching that abortion is not the solution to a diagnosis of disability in a pre-born child.

“Never, never does killing a person resolve a problem. Never,” the pontiff said in response to a father relating to him how he and his wife were advised to abort their daughter Andrea Maria but refused, despite her serious illness.

Pope Francis told the couple he was convinced that “God has called you to a vocation of greater love as parents. To be parents not once but twice: for human nature and for being chosen to accompany a special child, a special gift of God the Father.”

The Holy Father greeted each of the 20 children individually, then asked them, their parents, and their accompanying volunteers from the UNITALSI association, which organizes pilgrimages of the sick to Lourdes and other international shrines, why suffering exists, especially suffering in children.

“It is a question I often ask myself,” he said, “and which many of you, many people, ask themselves: why do children suffer? And there are no explanations. This is also a mystery. I simply look to God and ask, 'But why?' And I look at the Cross and ask 'Why is your son there?' It is the mystery of the Cross.”

Francis told the children to not be afraid of asking God 'why,' because consolation would come from their prayer.

As he has in the past, Pope Francis condemned the culture that would eliminate the weak and vulnerable in society, saying, “in this world it is so normal to experience a throwaway culture – if we are not happy with something we discard it.”

But he added with wholehearted admiration that in the midst of this “throwaway culture,” the sick children and their parents are in fact “heroes.”

“I really do not know what to tell you because I have so much admiration for your fortitude, for your courage,” he said.

“You live this situation, may I say – but I do not want to flatter, no, I say this from the heart – with heroism. You are the little heroes of life. I thank you for your example.”

The pope assured the children of his prayers for them and their parents, and concluded by encouraging them to go to the Lord with insistence and with confidence.

He said, “I pray for you, in the midst of these mixed feelings of joy and sadness. Do not forget this: call the Lord! The Lord knows how to console you in your suffering in a special way. He will give the comfort you need, to each of you.”

The audience ended with the recitation of a Hail Mary and the Pope's blessing, but Francis stayed a little longer to talk with each family until the group had to depart.

The following day, May 30, Pope Francis met with participants in a conference organized by the Science and Life Association.

Stressing that technological advances are not the measure of progress, Francis stated that, “the degree of progress of a civilization is measured by its ability to protect life, especially in its most fragile stages.”

The pope said that any attacks on human life must never be ignored.