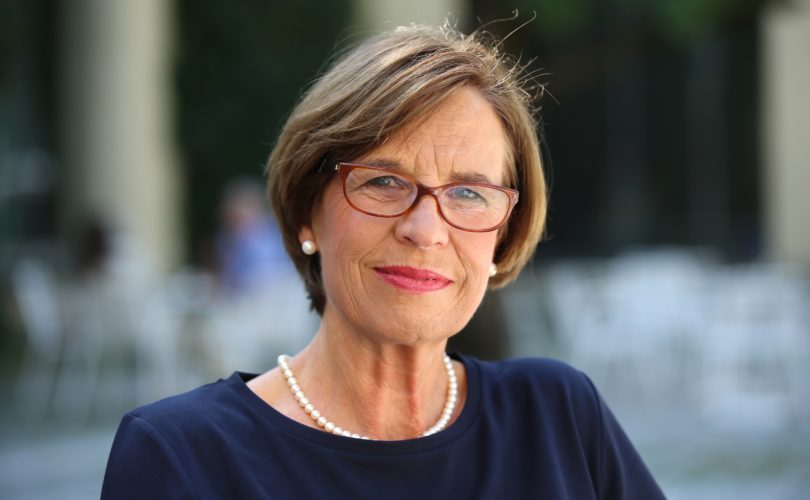 December 15, 2015 (LifeSiteNews) – Published this week is the first English translation of The Global Sexual Revolution: the Destruction of Freedom in the Name of Freedom, which details and dissects the insidious and totalitarian promotion by cultural elites and governments of sexual perversity and the destruction of the traditional Christian family. The author is Gabriele Kuby, a sociologist and adult convert to Christianity whom Pope Benedict XVI described as “a brave warrior against ideologies that ultimately result in the destruction of man.”

Benedict's comment (found in the preface to the original edition published in German and translated in the new version) reminds us chillingly how far those ideologies have advanced – to the very doors of the Vatican – in a short time since his resignation.

Kuby's grand and magisterial sweep of a book does not need an update, but the new edition does provide a survey of cases in Europe and the U.S. of government enforcement of the new sexual ideology with fines, threats, and actual imprisonments of Christian holdouts.

Kuby says the homosexual “rights” movement drives the ideology, but the problem also presents itself as radical feminism and, increasingly, gender fluidity and transgenderism. Its goal, she says, “is absolute freedom, unfettered by any natural or moral limitations.”

The great liberal ideal, writes Kuby, has shifted from the political arena through the economic to the sexual. The revolutionaries seek not the destruction of feudalism, monarchies, or capitalism, but the “tyranny of nature.” They strip masculinity and femininity of their normative meaning in the name of freedom and pleasure.

The term homophobia was “coined in the late 1960s by psychoanalyst and homosexual activist George Weinberg to make people who reject homosexuality appear mentally ill.”

According to Kuby, “the concrete weapons in this war include deconstruction of male-female sexuality, alteration of the population's social norms and attitudes (especially among youth), complete legal equivalency of homosexual partnership with marriage, and even social ostracism and legal criminalization of any opposition to these new 'norms.'”

Kuby chronicles the intellectual infiltration and conquest of virtually all other value-making institutions, leaving Christianity and its individual members standing virtually alone in the public square. Their message that sex is a powerful force that must be regulated and linked to the inherently sacrificial institution of marriage and family is now persecuted – and prosecuted – as homophobic.

In a book that moves seamlessly from details to the big picture, it is no surprise to find the actual origins of the term “homophobia” explained and critiqued. It was, Kuby reports, “coined in the late 1960s by psychoanalyst and homosexual activist George Weinberg to make people who reject homosexuality appear mentally ill.”

The Orwellian revolution in thinking this represents (homosexuality was considered a mental illness; now those who think this are themselves considered mentally ill) goes well beyond homosexuality, we learn from Kuby. In Germany, the entire language is being reconstructed to free it from male-dominated pronouns, while in Europe and America, gendered terms such as “mother” and “father” are increasingly being expunged from official record-keeping.

Kuby asserts that the nuclear family has resisted previous totalitarian exercises such as Marxism and Nazism and provided the source of regeneration when they collapsed: “After every catastrophe, the green growth of Christianity sprouted back, eventually in the unification of Europe on the bedrock of its Christian founders' higher values.” And it is happening again: she relates the rise across Europe of popular pro-family movements in the past decade and makes passing reference to similar responses in the U.S.

If these movements fail, Kuby predicts that the truly tolerant, liberal societies of Europe and the English-speaking world must fail, too. She cites a former constitutional judge in Germany, Ernst-Wolfgang Böckenförde, to make her point. “A liberal state,” he once wrote, “can only survive if the freedom it grants its citizens is regulated from the inside through the moral substance of the individual and the homogeneousness of the society.” If the state must force its definition of freedom by restrictive laws and prison sentences, says the judge, it is no longer liberal.

The Founding Fathers of the United States similarly believed that the democracy they were creating depended on the moral development provided individual Americans by their diverse Christian churches, even though many of those founders were far from being orthodox, if they were Christians at all.

Kuby, therefore, is warning against not merely the newly powerful ideology of pansexualism, but also the insidious return of totalitarianism, of the wolf clothed as a lamb, and of the tyrant masked as a defender of freedom.

The wreckage of the Sexual Revolution, laid bare in one website hack