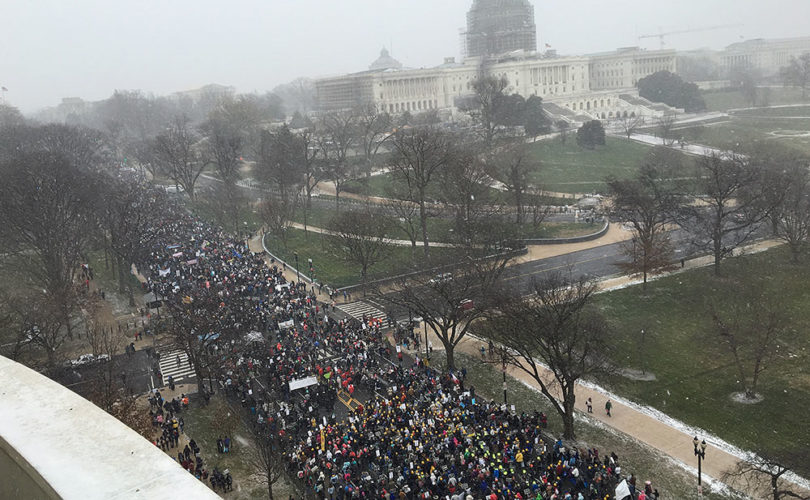 WASHINGTON, D.C., January 23, 2016 (LifeSiteNews) – Contrary to the New York Times, there were vastly more than “hundreds” at the Washington March for Life 2016 and more than the vague “thousands” indicated by the Washington Post. Given this year's historic winter weather threat, organizers were delighted that at least 40 or more thousands of pro-life supporters still stayed to march the full length of the march route before rushing home.

Mainstream media, however, took advantage of the adverse circumstances to manufacture the lowest numbers yet of their usual far-too-low estimates of participants in the annual march this year.

These photos and the video posted by LifeSite clearly reveal the total lack of credibility of the New York Times' and Washington Post's efforts to present an honest estimate of the numbers at the march. As reported Thursday, “The Alliance for Fair Coverage of Life Issues launched its #CoverTheMarch campaign that day demanding the media cover this year’s March for Life and cover it fairly.” Well, once again, it hasn't.

LifeSite reported that “The Alliance for Fair Coverage of Life Issues, a coalition of 17 pro-life organizations and two members of Congress along with the Media Research Center, was formed in response to the consistently poor coverage media outlets have given to important, newsworthy life issues.”

The Alliance is encouraging all fair-minded people, pro-life or not, to join with them to finally hold the media to account for their unethical, biased ignoring of this event, the largest annual march in Washington. They continue to shamefully publish crowd estimates that are clearly far below the reality and which any reasonably experienced and conscientious reporter would see as being completely innacurate.