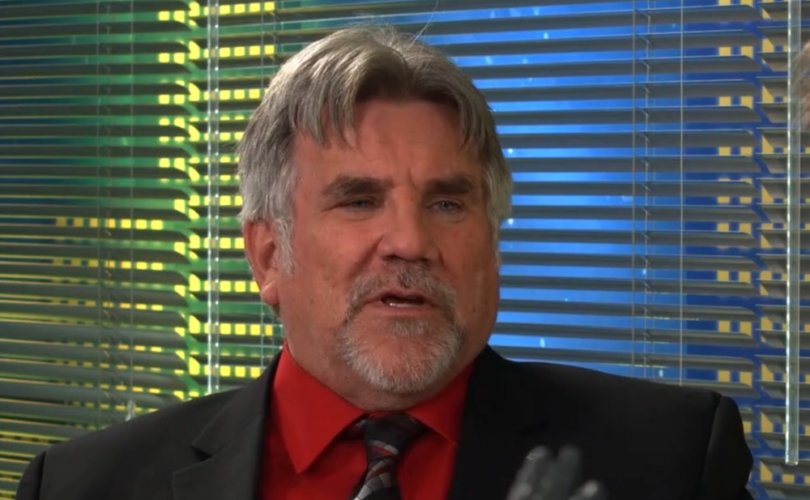 PETERSBURG, Illinois, September 22, 2020 (LifeSiteNews) — The Catholic lay group famous for exposing a predatory homosexual bishop and a pornographic online chatroom for homosexual priests two decades ago is initiating a wide-ranging investigation into clerical sexual abuse and possible corruption and coverups by American bishops.

“When we do this sort of thing, you can tell a lot by [the hierarchy’s] response and their non-response,” he said in a phone interview from his home in Petersburg, Illinois.

“They know from history with Roman Catholic Faithful — they know we don’t play games, we don’t blow smoke, we don’t tell lies.”

Brady likened the operation to “a form of a RICO action” conducted by the Catholic faithful and said that RCF will publish reports of its progress and the names of offenders on its website.

“To those bishops and priests leading a double life, characterized by deplorable immorality, corruption and cowardice, our advice is to repent or step down now. We are coming for you!” the RCF press release says.

“We know how to do the investigations necessary to compile the evidence that will prove wrongdoing. We will not make sloppy accusations that cannot be substantiated. Some of you will go to jail.”

RCF disbanded in 2009 after 12 years of exposing corruption and homosexual activity in the Catholic Church, but reactivated in August 2018 after the bombshell Pennsylvania Grand Jury report, which identified more than 300 alleged sex abuser priests and detailed how six different dioceses “systematically” covered up their crimes for decades.

“The Pennsylvania grand jury report shows that nothing has really changed despite all the promises after the Dallas Accords” of 2002, RCF’s attorney James Bendall told LifeSiteNews.

“We started putting the parts together before the McCarrick exposé. But this effort takes time, as we all have regular jobs and have to do RCF work in our spare hours,” he added.

“There are other organizations speaking out against clerical sexual misconduct. But we know of none that have initiated an effort like Operation Transparency.”

While the McCarrick scandal brought RCF “back into business,” it’s launching this operation now because “we’re getting so fed up with the stonewalling, the coverup by the hierarchy that we’re seeing, so we felt it was time to push it up a step,” Brady told LifeSiteNews.

He “recently met with directors of several major Catholic lay organizations to discuss its enhanced investigation of clerical misconduct and the obfuscation of important information by the bishops,” the RCF press release states.

Among Operation Transparency’s 12 goals are:

Canon lawyer Philip Gray, president of the St. Joseph’s Foundation, says RCF’s actions are in “complete conformity” with “their rights and obligations as baptized Catholics” and with Canon 212, paragraph 3, which states in part that “the Catholic faithful have the right and even at times the duty to manifest to the sacred pastors their opinion on matters which pertain to the good of the Church, to make their opinion known to the rest of the Christian faithful.”

“The history of the abuses that Roman Catholic Faithful are trying to address is very clear,” and the “obfuscation” by the hierarchy is likewise clearly evident, he told LifeSiteNews.

The father of seven children (one deceased), and grandfather of 14, Brady, 68, is not a trained detective, although he was a military police officer during the Vietnam War, after which he received a secret security clearance from the FBI and “spent a couple years protecting top secret weapons systems.”

Most of his working life he was a contracted carpenter, but since starting RCF in 1996, he “learned a lot of tactics and strategy over time with the help of others.”

RCF initially grew out of Brady’s “outrage” at what he discovered when he began protesting the “pornographic” sex education program Catholics were teaching in public schools in his diocese.

Although Bishop Daniel Ryan “brushed me off,” Brady persevered in his questioning, and that’s when a priest wrote him to ask: “Stephen, don’t you know?”

Ryan, the auxiliary bishop of Joliet and then bishop of Springfield, was infamous for picking up “runaway teenagers” for sex as well as for “forcing priests into sexual favours if they wanted to be promoted,” Brady related.

When presented with the evidence, Ryan denied it, but in an explosive 1998 press conference, Brady released testimonies of a former homosexual prostitute whom the bishop had paid for homosexual acts, and an independent witness to these encounters, as The Wanderer reported at the time.

Moreover, RCF was vindicated in 2006 when Springfield’s then-Bishop George Lucas released a report on an 18-month investigation which concluded that Ryan — who resigned in 1999 and died in 2015 — “engaged in improper sexual conduct and used his office to conceal his activities.”

The diocese launched the probe when chancellor Msgr. Eugene Costa was severely beaten in a Springfield park in 2004 by two young men after he allegedly propositioned them for homosexual acts.

“The sexual misconduct mentioned includes Bishop Daniel Ryan sodomizing teenage boys he picked up off the street. In some cases he would hear the boys’ confession in order to ease their young consciences,” RCF stated in its response to the report.

“This information was made available to Cardinal Francis George of Chicago in 1997 and to Bishop George Lucas in 1999.”

In another scoop, in 1999 RCF exposed St. Sebastian’s Angels, an internet chatroom for actively homosexual Catholic priests and religious started by a priest in Topeka, Kansas, who later left his religious order.

Used by about 55 priests and at least one bishop, the long-defunct site featured pornographic images, talk of homosexual hookups with young men, and derogatory remarks against Catholic teaching, and high-ranking prelates.

Bishop Reginald Cawcutt of South Africa resigned in 2002 after it was revealed he commented on the site that he wished Pope John Paul II would drop dead and that Cardinal Joseph Ratzinger would be poisoned, Catholic World News reported at the time.

As for some of RCF’s current investigations, Brady says he’s “digging into” his recent discovery that a group of American bishops have set up a not-for-profit corporation using the church’s tax-free status.

Although based in Omaha, where Lucas is now bishop, “as far as I could tell this corporation has no legal connection to any particular diocese,” Brady told LifeSiteNews.

It “appears to be getting its money from bishops of various dioceses and has purchased a $9-million building in Omaha, which serves as the office of record for several corporations set up by the bishops, and Catholic Mutual Relief Society is the main corporation,” he said.

“Their website claims they are not an insurance company, but provide help to various dioceses in time of need,” said Brady.

“The people I’ve spoken to within the Catholic circles, Catholic organizations, nobody knew that these existed, so it raises some questions,” he added, one being: “Why on earth will bishops have not-for-profit corporations outside their diocese?”

Brady believes there is widespread corruption in the Church up to the highest levels because so many bishops have lost the faith.

“Don’t get me wrong, I love the Church, it’s the only true Church, but we need to clean house of some of these individuals in the hierarchy,” he told LifeSiteNews.

“If a bishop comes into the hierarchy without a true love for the faith, with love for Christ, he comes in as part of a criminal enterprise. And so many bishops, so many cardinals have made it clear by their words, and their actions, and their inactions, that they don’t really love the Church.”

For this reason, it’s Brady’s view that Rome will never release a report on McCarrick.

“No heads have rolled as of yet in the hierarchy because of the McCarrick coverup. In fact, the fact that McCarrick was allowed to go on for so long shows how corrupt the hierarchy is,” he observed.

“I don’t think they can afford to come out with a report unless they’re ready to reform the entire hierarchy,” he added. A full disclosure of the truth would “destroy the hierarchy” and a watered-down version would “be exposed for what it was.”

Pulled out of the Communion line

Despite all he’s discovered, Brady says his faith has not been shaken.

A cradle Catholic, he stopped practising as a young man, but decided to “get my life right” after he left the army and was about to get married. He talked to a priest who recognized him at Mass afterward and “pulled me out of the Communion line.”

Fr. Stanley Swiacek told him: “Stephen, you’ve got to straighten up this, this and this,” Brady recalled.

“He made me mad at first, but later I realized he loved me enough to tell me the truth. He taught me a lesson, because sometimes the truth can be painful. And I got right with God.”

Swiacek also told him to leave the work he was doing if it caused him to doubt his faith, but it has had the opposite effect, Brady said, particularly when such things happen to him as surviving a motorcycle accident in 2007 that the doctors said should have killed him.

“It makes my faith stronger,” he said. “Now, I understand the faith better and I realize how true the Catholic Church is, and how wrong this hierarchy is.”

Swiacek also told him the Church doesn’t need “any more cafeteria, lukewarm Catholics” and Brady says the laity also bears much responsibility for the state of the Church today.

“So many” Catholics “vote for Democrat pro-abort politicians” and “have accepted homosexual activity and birth control and ..they let it go by, and they don’t speak out,” he said.

Indeed, after RCF exposed Bishop Ryan, Brady and his wife were shunned by many Catholics who crossed the street rather than speak to them, he recalled.

“We not only have to wake up the hierarchy …we've got to wake up our fellow Catholics,” he said. “The Catholic population is a big part of the problem. It never should have gotten this far.”

Those who wish to donate to Operation Transparency can go to the RCF website here. Those with information on suspected clerical sexual abuse or financial malfeasance can contact RCF in confidence at [email protected]