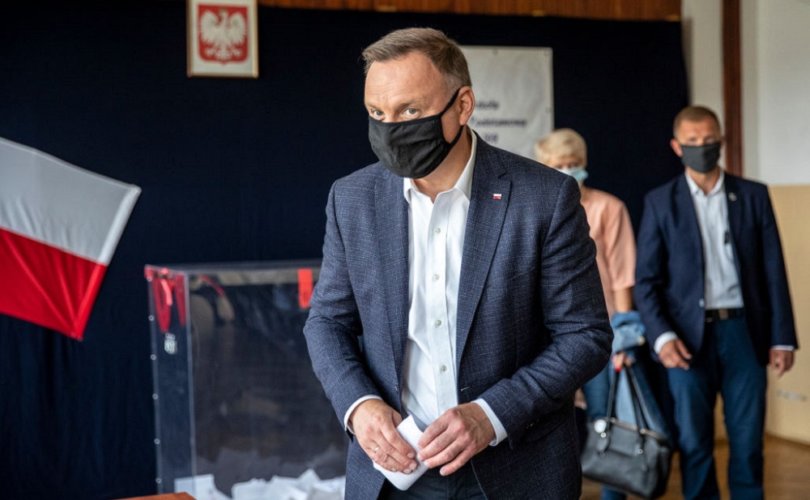 WARSAW, Poland, July 15, 2020 (LifeSiteNews) ― Some Polish pro-life activists believe that their best chance for strengthening their nation’s relatively pro-life abortion law lies in a coalition between the current governing party and a more conservative party.

Award-winning Polish journalist and Grzegorz Górny told LifeSiteNews via email that President Duda and his Law and Justice (Prawo i Sprawiedliwość, or PiS) party were not the first choice of the pro-life movement during the recent presidential elections.

“[Krzysztof] Bosak was the pro-lifers’ candidate in the first round of the elections, and Duda was their choice for the second round,” Górny said.

Ultimately, the Polish president was re-elected with 51.2 percent of the vote.

The journalist explained that Bosak’s Confederation (Konfedercja) party, itself a coalition between two Euro-skeptic parties, is not powerful enough to change legislation on its own.

“Some pro-life activists say that the best solution would be a PiS-Confederation coalition; then Confederation could force on PiS a change to the current law,” he said.

Currently the Polish law permits abortion only of an unborn child conceived in incest or rape, or who has Down syndrome, or who has a serious disabilty, or if a mother’s life is physically endangered by her pregnancy. For some years, Polish pro-lifers have attempted to extend the law’s protections to children with Down syndrome and other disabilities.

Freelance journalist and translator Filip Mazurczak, a Polish-American based in Kraków, told LifeSiteNews that many conservative voters no longer believe that Duda’s PiS party wants to ban eugenic abortion of disabled children.

“Most people on the right believe that PiS and PO [the leading opposition party Platforma Obywatelska, Civic Platform] have the same attitude towards abortion, and they are absolutely right,” he said via social media.

Mazurczak explained that PO has always claimed to support the status quo on the issue ― the relatively restrictive law of 1993 ― but that PiS engages in “empty rhetoric” about strengthening it.

“When they are interviewed for the Catholic media, PiS politicians say that they are in favor of ending eugenic abortion,” the journalist said. “However, they have failed to do so, even though they have been in power for five years,” he continued.

“People like Bosak are angry with PiS for not changing the legislation on abortion, and they say there is no difference between PiS and PO on the issue. They are absolutely correct.”

Polish conservatives’ frustration with PiS is so strong that half of Confederation’s voters voted for PO in the decisive second round, ensuring that Duda retained his presidency with only half a million votes. This could easily have led to a defeat for the PiS candidate, given the opposition to him from almost all other quarters.

“The presidential elections turned into a referendum: are you for PiS or are you against it?” Grzegorz Górny told LifeSiteNews.

“It was a dispute between two big ideological and political blocs: conservative and liberal-left,” he continued.

“It reminds one a little of the situation in America, which is also divided between Republicans and Democrats. In the elections Duda faced 11 challengers who all attacked him. Duda was also opposed by the majority of the media, big business, celebrities, and European elites.”

But Górny believes that Duda won the election after all because enough Polish voters assessed the PiS governments of the past five years more favorably than the PO governments of 2007 to 2015.

“That’s why during the campaign [PO’s] Trzaskowski distanced himself as much as possible from [his party’s] achievements and adopted some elements of the PiS program,” he said.

Trzaskowski also dialed back some of his pro-LGBT rhetoric. Despite having said earlier that he wanted to be the first Warsaw mayor to perform a same-sex “wedding,” during the campaign, Trzaskowski said that he was against same-sex “marriage.”

“Trzaskowski got such good results not because he is personally popular but because he was the anti-Duda, that is, he gathered around himself everyone who was against PiS for different reasons,” Górny explained.

Górny believes that the ultra-conservative vote for PO was based in Confederation’s commitment to the free market and opposition to what they see as PiS’s fiscally socialist policies.

Filip Mazurczak told LifeSiteNews that some PO parliamentarians are now blaming the party for running such a socially liberal candidate.

“During his extremely unremarkable 1.5-year tenure as mayor of Warsaw, promoting the LGBT agenda was most of what Trzaskowski did,” Mazurczak said.

“I always joke that if I were his wife, I’d be concerned about his obsession with the LGBT agenda.”

Mazurczak added that nobody considered Trzaskowski a viable candidate for the presidency at the time because of the “dissonance” between Warsaw and the rest of Poland.

“Warsaw is much more liberal than the rest of the country, so what flies there won't fly in most of the rest of Poland, which is why [Trzaskowski] backtracked,” he said.