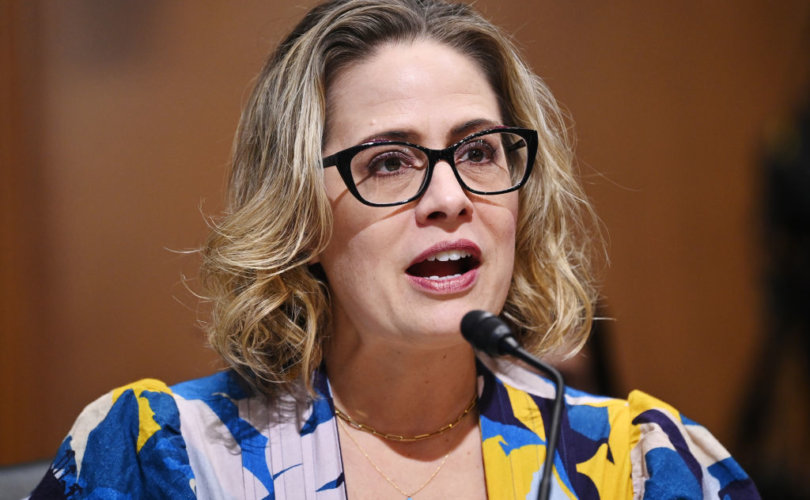 The resolution could help establish bipartisan opposition to the mandates but is likely a purely symbolic move.

The Daily Wire reported Tuesday that Democrat senators Jon Tester of Montana, Joe Manchin of West Virginia, and Kyrsten Sinema of Arizona have all made comments suggesting they may support the resolution, which will go to the Senate floor for a vote this week.

When asked whether he would support a resolution nullifying the Biden administration’s COVID-19 jab mandate, Sen. Tester reportedly responded, “I’m not crazy about mandates.”

TESTER will also vote YES on the CRA to undo the Biden Admin vaccine mandate on the private sector, he says.

“I’m not crazy about mandates,” he said, (but he says he supports mandates for health care workers & military).

Likewise Sen. Sinema, who has drawn the ire of her fellow Democrats for opposing aspects of Joe Biden’s radical multi-trillion dollar Build Back Better Act, refused to give a direct answer when asked by CNN last week whether she would “vote with Democrats to hold up the president’s mandates.”

“Well, I’m not going to tell you those things,” Sinema said, adding that she would vote “in the interest of Arizonans.”

Sen. Joe Manchin, a moderate Democrat representing deeply Republican West Virginia who joins Sinema in objecting to elements of the Biden administration’s unwieldy infrastructure plan, made perhaps the clearest statement, affirming last week that he does “not support any government vaccine mandate on private businesses.”

“That’s why I have cosponsored and will strongly support a bill to overturn the federal government vaccine mandate for private businesses,” Manchin said. “I have long said we should incentivize, not penalize, private employers whose responsibility it is to protect their employees from COVID-19.”

The federal jab mandate Manchin said he would support overturning is the rule developed via the Occupational Safety and Health Administration (OSHA), which would force private employers with 100 or more employees to require their workers to get the experimental jab or undergo weekly testing and other requirements.

Enforcement of the mandate was stalled by a federal court within days of its publication, and continues to be held up in the courts. Meanwhile, OSHA itself has suspended enforcement of the rule pending litigation.

Despite signaling support for a move to topple the Biden administration’s private employer jab mandate, Manchin said he has received three doses of the drug and urges “every West Virginian to get vaccinated themselves.”

Manchin’s comments urging mass immunization come in spite of the fact that coronavirus vaccine trials have never produced evidence that the jabs stop infection or transmission of the virus. Moreover, there is strong evidence that the “vaccinated” are just as likely to carry and transmit the virus as the unvaccinated.

While opposition to coercive jab mandates has appeared to gain a measure of bipartisan support, even if passed the resolution will likely not survive beyond the walls of the Senate building.

White House Press Secretary Jen Psaki told reporters Tuesday that if the Senate passes the resolution Biden will veto it.

Senators could vote on the resolution as early as today.

According to The Hill, “Republicans say they expect the resolution will pass with at least 52 votes after centrist Sens. Joe Manchin (D-W.Va.) and Jon Tester (D-Mont.) announced their support for the proposal. Every single Republican senator will vote for it.”