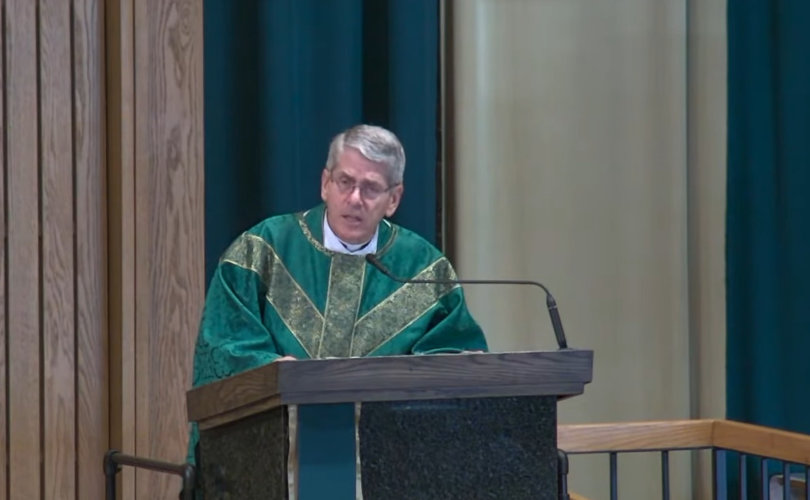 Fr. Thomas Dufnerscreenshot/YouTube/ The Church of the Epiphany

COON RAPIDS, Minnesota (LifeSiteNews) — A Catholic priest in Minnesota urged his flock to push back against vaccine mandates and “reclaim dignity.”

Drawing on Church teaching on the rights of workers and economic rights, Fr. Thomas Dufner urged his flock to protect their liberties and oppose vaccine mandates during a homily on October 17.

The Roman Catholic priest said that vaccine mandates are unjust and violate the rights of citizens.

He said the inoculation requirement “usurps the rights of individuals.”

Dufner then critiqued the idea that the jabs are “safe.” He cited Vaccine Adverse Event Reporting System (VAERS) data on side effects and deaths. He put the number of deaths at over 16,000.

He told his parishioners to think about the dangers of the jabs and how “something doesn’t add up.”

His homily then went into the topic of natural immunity, which refers to the presence of antibodies in previously infected individuals.

People should ‘act together’ for the ‘common good’

The homily then referenced the October flight cancelations by Southwest Airlines, which some speculated was linked to a “sickout” among staff and pilots who were protesting the jab requirements. The airline and the pilots’ union denied there was a strike.

This is what happens when workers stand together, Fr. Dufner said nonetheless.

He also said that many “heroes,” like nurses, are now being vilified if they do not get jabbed. “Is it time to seize authority back from the [insurance companies and the government]?” Dufner asked. There is precedent for this, he said, noting that the solidarity movement of Polish workers helped lead to the downfall of Communism.

He also alluded to the silencing of medical professionals who are being told by health insurance companies not to prescribe alternative treatments. He asked if doctors too should have a “sickout” to reclaim their medical skills and relationship with patients.

“Is it time for the doctors to reclaim their authority” so that patients can have freedoms, Dufner asked.

Jesus, the priest said, wants people to use “initiative” and “drive” for the “common good” and to “serve others.”

“The greatest will be the ones who served the rest,” the priest ended, quoting Matthew 23:11.

LifeSiteNews has put together a guide for Americans on how to resist jab mandates, and has another one for Canadians.