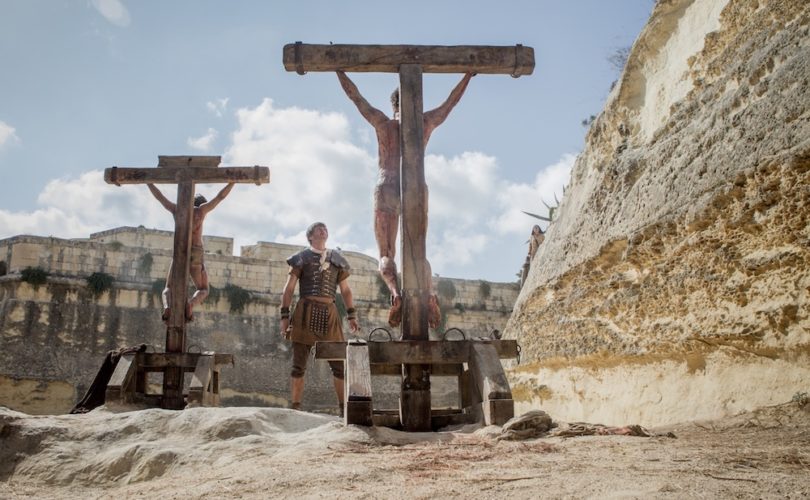 Jesus crucified along with other convicted criminals in RISEN, in theaters nationwide, Feb. 19, 2016.Columbia Pictures

January 14, 2016 (LifeSiteNews) – In 2004, Passion of the Christ took the world by storm, earning more than $370 million at the US box office and inspiring Christians and non-Christians alike with the brutal tale of humanity's most important death.

Almost exactly 12 years later, Sony hopes the movie Risen will do the same – by explaining how the Romans reacted to Christ's rising.

“A couple years after the success and impact of 'Passion of the Christ' in 2004, several writers and producers started to delve into the idea of telling the rest of the story,” Sony executive Rich Peluso told LifeSiteNews in an e-mail interview. “Around that time Affirm Films, a division of Sony Pictures Entertainment, was formed, and we received over a dozen different scripts covering the period after the crucifixion. Paul Aiello's script, the writer of RISEN, stood out as our favorite.”

Peluso, who is the senior vice president of Sony's Affirm Films, explained that things took a little while to get going. “While we weren't able to put everything together to get that off the ground, it re-emerged seven years later from producer Mickey Liddell, who had brought on Kevin Reynolds as director. Kevin was the one that flipped the story upside-down and told it through the eyes of an unbelieving Roman military tribune, Clavius.

“That fresh perspective is what compelled us to come on board.”

Asked about the many anti-Christian and secular themes popular in Hollywood, Peluso said that while “in any area of the arts, there will be material that runs counter to a biblical worldview,” he and his team “enjoy enthusiastic support for our mission” from “our parent Sony Pictures Entertainment.”

“Sony Pictures appreciates our focus on great craft, storytelling, and compelling themes and content that engages audiences and delivers strong results,” he explained. “They empower us to go out and produce and distribute the films we do, such as War Room, Soul Surfer, Heaven Is for Real, Courageous, and When the Game Stands Tall.”

Like the R-rated Passion, the upcoming Risen is prone to violence. Peluso says that the movie “received a PG-13 for biblical violence, and that's what it has. Risen includes the brutal treatment of the Hebrews by Rome, and the violent death of Jesus. It's hard and unrealistic to skirt around that with a milquetoast story and visual experience.

“There is nothing gratuitous in the violence that is there, and the response we've got from test audiences, including pastors and faith community leaders across North America, has been very positive. It is important to note that through our testing and feedback process, we did tone down the crucifixion scene and, to some degree, the key battle scene.”

While he declined to discuss box office expectations – “That's a game we really don't play. Anyone who thinks they know with certainty what consumers will respond to and what makes a hit is deluded or doesn't know what they're talking about” – Peluso noted that AFFIRM Films has “had a solid run with over $325 million in domestic box office” returns.

He contrasted this to “several faith-based films over the last couple years that have not hit a box office total that covers the production costs, much less marketing.”

And will Jesus, his mother, and the first Christian disciples play roles in the film? Absolutely, says Peluso.

“Risen takes the viewer on an amazing journey that visits most all the key characters that were part of the resurrection story we all know and love. Mary, Mary Magdalene, all the disciples, Pilate, Caiaphas, the Roman soldiers who guarded the tomb, and Jesus himself play important roles in the film.”

However, “the twist is that it's told through the eyes of a skeptic – a nonbeliever – as Clavius, the Roman military tribune who encounters these incredible people.”

Peluso concluded that “[w]hile there have been several films that have observed Jesus through different eyes, such as Ben-Hur and The Robe, there isn't anything as deep, dramatic, and epic as Risen in tackling the intersection of scripture and historical fiction in quite this way.”

Risen will be released in theaters on February 19. The second trailer for the film (seen above) has more than 85,000 views.

‘Heaven is for Real’ asks viewers, ‘What do you believe?’