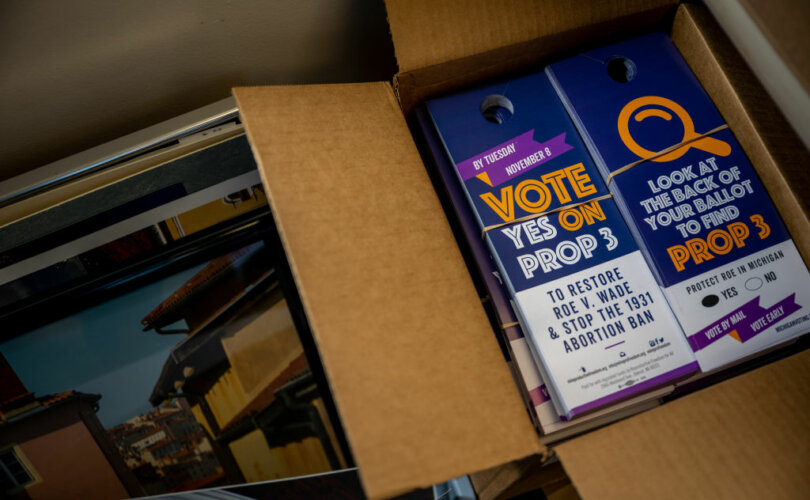 LANSING, Michigan (LifeSiteNews) — The amendment to Michigan’s state Constitution, Proposal 3, enshrining abortion up to birth – along with the sterilization and transition of children without parental knowledge or consent – passed 57–43 on Tuesday.

The measure was promoted by a leftist lobby group belonging to billionaire George Soros, which donated $4.5 million to the campaign for the passage of the abortion law.

As LifeSiteNews reported last month, “According to an analysis by the Great Lakes Justice Center (GLJC), as well as an article by former Michigan Solicitor General John Bursch published by the Michigan Catholic Conference, the implications reach far beyond the expansive text.”

According to Bursch, “Proposal 3 goes much farther than merely codifying Roe v. Wade, invalidating more than two dozen Michigan pro-life laws and authorizing minors to obtain abortions without a parent’s consent or even notice.” Further, “because Proposal 3 grants this right to ‘every individual,’ without age limits, that means the proposal, on its face, authorizes a minor to obtain a sterilization without parental consent or even notice, such as when a minor desires to change his or her gender.”

The campaign pushing the radical abortion law was funded in the millions of dollars by a lobby group of George Soros, called the Open Society Policy Center (OSPC). As LifeSiteNews reported last week, the group “donated $4.5 million to Reproductive Freedom for All, the political action committee organized to support the Michigan initiative. OSPC is a lobbying organization under the umbrella of Soros’s Open Society Foundations (OSF).”

In June, the OSF called the U.S. Supreme Court’s Dobbs decision an “assault on women’s rights, human rights, and democracy that will have a damaging impact around the world.” The organization said it was “proud to invest in grassroots and national reproductive rights organizations who are fighting back at this moment, both in the United States and globally.”

Regarding the Soros funded abortion law, Christen Pollo, spokeswoman for the pro-life Citizens to Support Michigan Women and Children, told the Catholic News Agency, “Out-of-state abortion advocates are trying to buy a constitutional amendment in Michigan that they hope to use as a blueprint across the rest of the country.” Pollo denounced this interference with Michigan’s internal state politics, saying, “This is not a Michigan effort. This is New York and California pushing an extreme agenda on the people of our state.”

The amendment has also stirred strong opposition among the Catholic hierarchy. Archbishop Allen Vigneron, of the Archdiocese of Detroit, sent a pastoral letter to all Catholics in the archdiocese exhorting the faithful to vote against the amendment since it “would allow unregulated abortion on demand through all nine months of pregnancy.” And in September, Bishop Earl Boyea of Lansing called upon his diocese to join him in a 54-day novena, ending on the eve of the election, for the intention of defeating Proposal 3.

Today, in a statement on the passage of Proposal 3, Barbara Listing, president of Right to Life of Michigan, lamented the radical abortion law now enshrined in the state’s Constitution:

We are deeply saddened by the tragic passage of one of the most dangerous ballot proposals to face voters in Michigan history, Proposal 3.

Right to Life of Michigan (RLM) staff, our statewide affiliates, thousands of volunteers and donors, and our many state and local partners selflessly sacrificed their time, talent, and treasure to educate voters on this extreme proposal, standing courageously for the dignity of human life and parental rights.

Our efforts to educate voters on the true threats of Proposal 3 faced incredible odds that were ultimately insurmountable. The larger coalition to defeat Proposal 3 was outspent by a margin of more than 2 to 1. Out of state billionaires from New York and California funded a disinformation campaign to lure voters. The large majority of free press mounted an unprecedented deluge of one-sided advocacy designed to pass Proposal 3. This was a shameful disservice to our democratic process and Michigan voters seeking the truth.

Michigan voters accepted assurances Proposal 3 did nothing more than repeal the 1931 law. RLM will hold proponents of this amendment to that commitment.

In the days ahead, RLM will redouble our efforts to work across Michigan communities to protect the dignity of all human life.