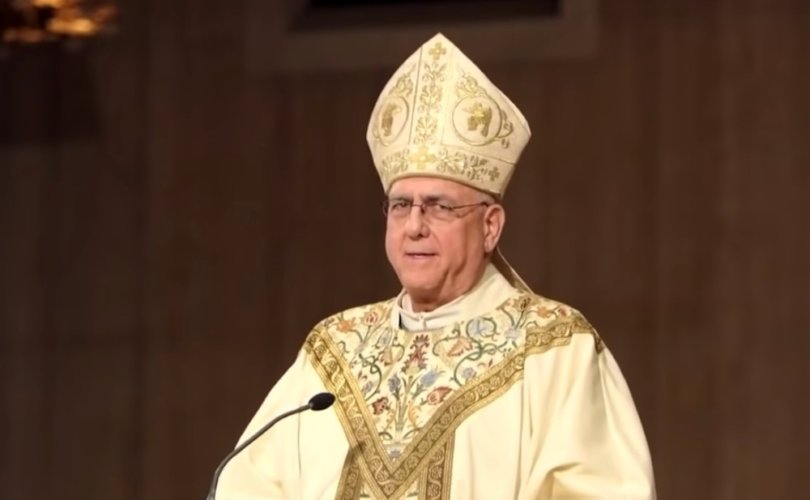 Faith in Public Life and Faithful America — two far-left, so-called religious groups backed by atheist mega-donor George Soros — launched an online petition last week to unseat Naumann from his committee post. The petition had nearly 20,000 signatures as of Tuesday, although Faithful America has been known to pad petitions with fake signatures.

Both Soros-backed, pro-abortion and pro-LGBT groups behind the effort to cancel Naumann have worked for years to destroy the careers of faithful Christian leaders, winning condemnation even from mainstream media outlets. The organizations repeatedly have targeted top Catholic prelates, including Archbishop Salvatore Cordileone of San Francisco, as well as traditional humanitarian aid providers and evangelical pastors.

“As fellow Catholics, Christians, and other concerned people of faith, we urge conference leaders to remove Archbishop Joseph Naumann as chair of the pro-life committee,” the petition against Naumann reads.

“We encourage you to select a new leader who will refrain from attacking the president’s personal faith,” it adds.

Naumann slammed Biden in an interview in February, correcting the longtime pro-abortion, pro-LGBT Democrat’s claims of being a “devout Catholic.”

Naumann also stressed that Biden should not receive the Eucharist.

“I believe the president has the responsibility not to present himself for Holy Communion,” he said, adding that Biden “should not put the priest in the situation where he has to decide whether or not to allow him to receive the Eucharist. He should know that after 78 years as a Catholic.”

‘Impossible’ for a Catholic to support abortion

While Faithful America and Faith in Public Life accused Naumann of failed “pastoral leadership” for “questioning President Biden's faith,” Church teaching holds that opposition to abortion is absolutely non-negotiable for lawmakers presenting themselves as Catholic.

“In the case of an intrinsically unjust law, such as a law permitting abortion or euthanasia, it is therefore never licit to obey it, or to ‘take part in a propaganda campaign in favor of such a law, or vote for it,’” Pope St. John Paul II declared in his encyclical Evangelium Vitae, quoting teaching promulgated by Pope St. Paul VI.

A document published in 2002 by John Paul II and written by then-Cardinal Joseph Ratzinger, later Pope Benedict XVI, emphasized that it is “impossible” for Catholics to support “any law” that promotes abortion.

“John Paul II, continuing the constant teaching of the Church, has reiterated many times that those who are directly involved in lawmaking bodies have a grave and clear obligation to oppose any law that attacks human life,” the letter reads. “For them, as for every Catholic, it is impossible to promote such laws or to vote for them.”

The Catholic Church unequivocally denounces abortion as intrinsically evil and gravely sin, as it has for two millennia and “attaches the canonical penalty of excommunication” for any “formal cooperation” in abortion. In a 2004 memo to U.S. Catholic bishops, Cardinal Joseph Ratzinger – the future Pope Benedict XVI – clarified that “consistently campaigning and voting for permissive abortion and euthanasia laws” fits the definition of “formal cooperation:”

Regarding the grave sin of abortion or euthanasia, when a person’s formal cooperation becomes manifest (understood, in the case of a Catholic politician, as his consistently campaigning and voting for permissive abortion and euthanasia laws), his Pastor should meet with him, instructing him about the Church’s teaching, informing him that he is not to present himself for Holy Communion until he brings to an end the objective situation of sin, and warning him that he will otherwise be denied the Eucharist.

Biden’s extreme, decades-long abortion advocacy, which has included notorious slandering of pro-life judges, is far from his only break with fundamental Catholic teaching.

As vice president, Biden officiated a homosexual “wedding” in 2016, after publicly endorsing same-sex “marriage” in 2012. The Church always has recognized homosexuality to be “intrinsically disordered” and emphatically states that homosexual activity “can never be approved.”

Biden has been an outspoken proponent of transgenderism as well, indicating on the 2020 campaign trail that gender-confused children as young as eight should receive mutilating “sex change” procedures.