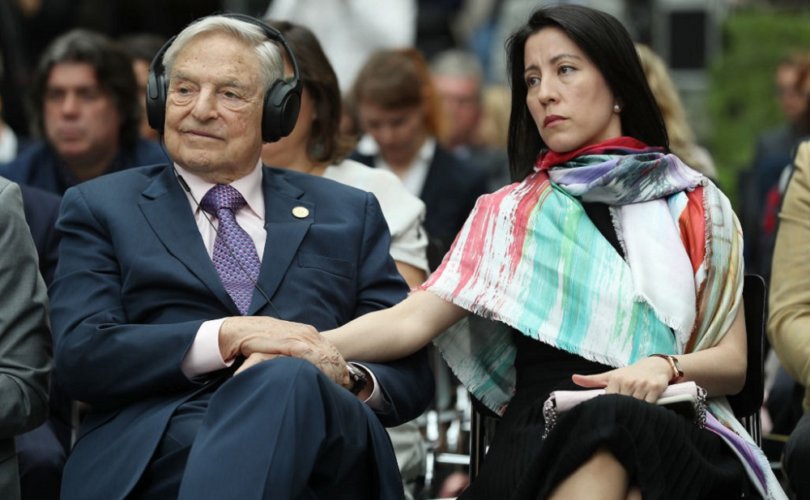 September 22, 2020 (LifeSiteNews) — Billionaire George Soros is behind a vast coalition of left-wing advocacy groups gearing up to launch a massive “resistance” movement if Democrat Joe Biden is anything but the clear winner on Election Day, an investigative report by Breitbart has found.

Combined, the coalition of grassroots groups spread throughout all 50 states acting in conjunction with their political allies could create mayhem which would dwarf this summer’s violent, destructive urban “protests.”

And it appears that coalition leaders will be determined to find some pretext — envisioning President Trump contesting the election results, refusing to concede after losing, or claiming victory before all the votes are counted — to ignite sprawling country-wide protests, civil unrest, and economic gridlock if their preferred candidate is not elected.

“There’s going to be litigation, mass mobilization, policy options by governors, state attorneys general, members of Congress,” promised Vanita Gupta, the president of the D.C.-based Leadership Conference on Civil and Human Rights, a beneficiary of financial support from George Soros.

“People will be inspired and motivated to protect their country,” said Rahna Epting, executive director of Soros-funded MoveOn.org, to The Nation. “Will we be successful? We’re going to fight like hell to make sure we are.”

“The more Trump turns up the temperature, [the more] he is angering the public. They’re tired of the chaos, tired of his mismanagement,” said Epting, attempting to foment distrust for the president. “We have to do everything we can to make sure it is a landslide victory, to make it less likely he can fight it.”

“Under the guise of seeking to ‘prevent a constitutional crisis,’ a massive network of well funded left-wing activists and progressive groups are training, organizing, and planning to mobilize millions of Americans should President Trump ‘contest the election results,’ refuse to concede, or claim an early victory,” wrote Klein.

“Calling itself ‘Protect the Results’ and proclaiming that ‘we cannot ignore the threat that Trump poses to our democracy and a peaceful transition of power,’” the coalition is “a joint project of Indivisible and Stand Up America, two left-wing groups founded in response to President Trump’s 2016 election and whose goals are ‘to organize and resist Trump’s dangerous agenda’ and ‘to defeat Trump and his enablers,’” explained Klein.

Both groups are part of a larger umbrella network, the Soros-funded Democracy Alliance (DA), which boasts of having funneled as much as $80 million per year to promote progressive ideas and which claims its constituency to be “people of color, LGBTQ individuals, women, and millennials,” who will drive “progressive social change.”

“We play a leading role in fostering the infrastructure necessary to advance a progressive agenda for America,” declares the D.A. website.  “We invest in every aspect of progressive power-building — from policy making to organizing grassroots communities to winning state and national issues and electoral campaigns.”

Stand Up America alone claims over 2 million members committed to “resisting Trump’s agenda” who have engaged in protecting the Mueller Investigation and fought hard to block the confirmations of Supreme Court Justices Neil Gorsuch and Brett Kavanaugh.

Indivisible’s current homepage headline blares, “Join us to save the Supreme Court; We cannot let Donald Trump destroy Ruth Bader Ginsberg’s [sic] legacy by replacing her with a justice from his shortlist of conservative extremists.”

Key players supported by D.A. are #Resist, the ACLU, Media Matters, and Organizing for Action. The last group was created in early 2013 to keep President Obama’s supporters engaged after the election.

Much of the rhetoric generated by the leaders of these disparate groups is unfounded if not unhinged, painting an ominous scenario of the incumbent losing the White House,  creating a constitutional crisis by refusing to leave, and “pushing the American republic to the breaking point.”

“Indivisible points to its demonstrated ability to mobilize huge numbers of people to protest family separation early in the Trump presidency and to activate the networks that marched in the streets calling for impeachment in 2019,” pointed out Sasha Abramsky in The Nation earlier this month. “Those actions — along with the Women’s Marches, mobilizations around the climate crisis, and of course, recent outpourings of support for racial justice — have shown that people power can shape events even in the Trump era.”

“Our resistance is key in protecting the outcome of this election,” said Arisha Michelle Hatch, executive director of Color of Change PAC. “We will mobilize to safeguard Black people from the chaos and pain that will inevitably ensue should Trump choose to disregard reality in November.”

“The only guardrail keeping Trump from driving our democracy over the cliff into an ocean of fascism is we the people on Election Day,” said Nelini Stamp, director of strategy and partnerships at the Working Families Party.

“If Trump continues to apply tactics aimed at intimidating voters and disrupting our election, we will need massive grassroots resistance to protect our democracy,” asserted K. Sabeel Rahman, president of Demos Action. “In the face of a consequential and crucial general election it will take all of us to ensure that our democracy isn’t hijacked.”

“When Joe Biden and Kamala Harris are elected it will be because people looked at the last four years of divisiveness, including unconscionable attempts to divide us based on race, and soundly rejected that rhetoric,” said SEIU International president Mary Kay Henry.

“Prosecutors — the people whose job it is to keep you safe — are instead making it easier for criminals to terrorize your family,” proclaimed Tucker Carlson.

“That’s not an accident,” said Carlson. “Left-wing megadonors like George Soros realized it’s easier to install radical DA’s than it is to convince the public to let their own cities burn. Soros has worked hard to elect district attorneys who will nullify laws against rioting and violence by failing to enforce them.”

“Entities backed by Soros have spent more than $13 million in district attorney races in a total of 17 states,” said the Fox News host. “Over the past few years, this unfolded in Florida, California, Pennsylvania, Texas, [and] Virginia.”

“In 2017, Soros spent roughly $1.7 million getting a single man elected, Larry Krasner, in Philadelphia. He’s the district attorney, and as expected, Krasner presided over a dramatic rise in crime,” he added.

Soros-backed left-wing district attorneys will be unlikely to enforce the law against Soros-backed protests in November, which could turn more violent and destructive than those the nation has already witnessed in places like Portland; Seattle; Minneapolis; Kenosha; and Washington, D.C.