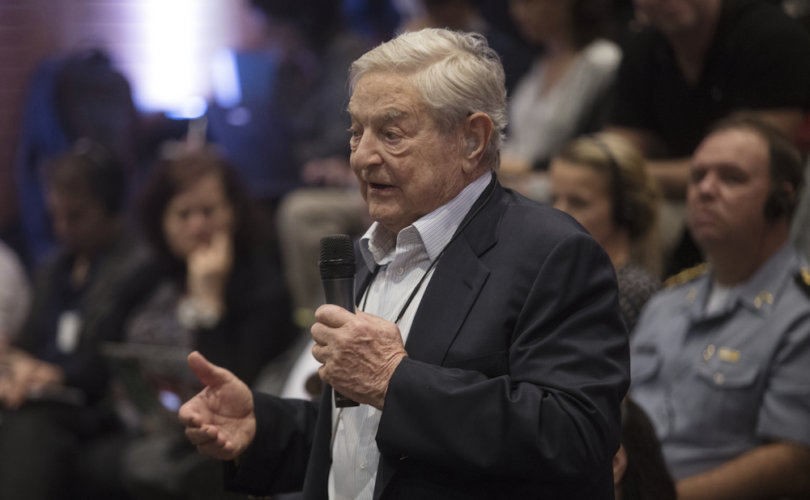 WARSAW, Poland, October 6, 2017 (LifeSiteNews) — Poland loves her babies, but foreigners want to kill them. The black-clad, pro-abortion protests that swept through Poland last October were neither “spontaneous” nor part of a “grassroots movement” but funded from abroad.

In a comprehensive report released October 3, Poland’s Ordo Iuris Institute presented its evidence that the country’s marginal feminist movement has received “enormous funding from abroad.” It traced most of the money to organizations funded directly or indirectly by Hungarian-American financier George Soros. Poland’s pro-abortion groups received about one million Polish zloty to block the Polish government’s 2016 attempt to completely ban abortion.

Ordo Iuris says Poland’s public universities, which were supposed to be neutral, were also actively involved in the pro-abortion protests.

The Global Fund for Women (GFW) is a partner and legatee of George Soros’ Open Society Foundations. The organization, which promotes access to abortion worldwide, boasts on its official website that it funded Poland’s so-called “black protests”:

“Global Fund for Women’s unique approach in investing in ‘tipping points’ — critical moments for political or social turmoil — is also essential to our crisis response approach, as evidenced in Poland. When a total ban on abortions was proposed by the government in early 2016, Global Fund for Women supported ASTRA Network to help mount a powerful resistance.

“With crisis support provided in April, ASTRA Network built a broad coalition of women’s groups and other grassroots [sic] organizations across Poland to raise awareness about the threat to women’s health and human rights. They launched effective media campaigns to put pressure on the government throughout 2016 leading up to massive “Black Monday” strikes that led Poland’s parliament to withdraw the proposed legislation in October.”

The ASTRA Network is a subsidiary of Poland’s feminist “Federation for Women and Family Planning”, better known as Federa. Through ASTRA, Federa received £12,000 from GFW last year. Another pro-abortion group involved in the black protests, Women’s Cooperative Foundation, received $10,000 from GFW in 2016.

Ponton, part of the Women’s Cooperative Foundation, is a group of sex educators. Their most recent post directs readers to “invite Ponton to your school.” According to Ordo Iuris, MamaCash declared in its 2016 report that it helped to defeat Poland’s abortion ban and that Ponton was “at the head of the resistance.”

The International Women’s Health Coalition (IWHC), another organization funded by Soros’ Open Society Institute, also supported the “black protests.” According to the IWHC’s website, it gave the pro-abortion ASTRA Network grants to “lead protests and a women’s strike.” The IWHC also sent an ASTRA Network delegate to its conference on gender equality. In total, the IWHC gave ASTRA $40,000 in 2016. Federa, too, has received big money from the IWHC: in 2015, the former received $40,080 from the latter.

“It turns out that the (IWHC) organization has been sponsoring seminars and junkets (for Polish pro-abortion activists) for years,” Ordo Iuris reported. “It is worth noting that as early as 2014, IWHC trained Polish women activists on the ‘leadership skills needed to work effectively for sexual and reproductive rights,’ among them lobbying workshops.”

The money trail keeps on going. In 2016, ASTRA Network was granted £90,000 from Britain’s Sigrid Rausing Trust. The Trust’s website reports that it has supported ASTRA since 2004 and has given it £655,000 to date. Between 2014 and 2016, Federa received money from the Soros-controlled Stefan Batory Foundation to promote abortion rights and to fund Ponton’s sex education projects.

The Ordo Iuris Institute has promised an even more comprehensive report into the foreign funding of Poland’s pro-abortion activists. Meanwhile, it observed that among the media outlets invited to participate in last year’s “black protests” were those belonging to Agora S.A. group, a Polish media company tied to Soros’ Media Development Investment Fund (MDIF), which owns more than 11 percent of the company.