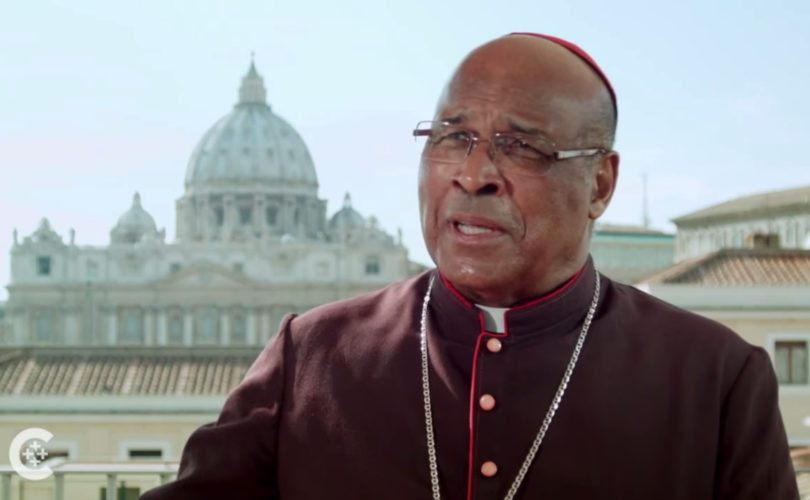 DURBAN, South Africa, July 6, 2016 (LifeSiteNews) – Just days after a South African cardinal questioned the need for Catholics and Christians to apologize for bias toward gays and lesbians, he suggested that an apology should instead go to black women in the United States, where abortions continue among minorities at an alarming rate.

Outspoken Cardinal Wilfrid Fox Napier of Durban pointed to statistics from the Guttmacher Institute, founded by former Planned Parenthood director Alan Guttmacher, that estimate more than 57 million abortions have been performed in the United States since the Supreme Court’s Roe v. Wade decision legalizing the killing of unborn children in 1973.

The rate of abortions is nearly four times higher for blacks than for white women in America.

“Isn’t this something we should be apologizing for?” Napier asked in a series of posts on Twitter last Friday.

Specifically, he pointed to a disproportionate number of abortions for African-American women in the United States, referring to it as a “genocide.” Statistics indicate that 31 percent of abortions are performed on black women.

“That figure starts looking like a genocide when one factors in that Black women make up only 13 percent of the total number of women in USA,” he tweeted.

By contrast, white women make up 63 percent of the U.S. population and account for 37.7 percent of all abortions.

Then Napier forthrightly asked, “Isn’t that also something we should be apologizing for?”

1/3 Guttmacher Institute estimates that since 1973 USA has aborted 57 million+ babies! Isn't this something we should be apologizing for?

2/3 Of those 57 million+ babies disproportionate number, +/- 31% have been Black! Isn't that also something we should be apologizing for?

3/3 That figure starts looking like a genocide when one factors in that Black women make up only 13% of total number of women in USA,

Napier had reacted on Twitter last month after the mass shooting at a gay nightclub in Orlando, Florida, questioning some Church leaders who wanted to place at least some of the blame at the feet of Catholics and Christians for the attack.

“God help us! Next we’ll have to apologize for teaching that adultery is a sin! Political Correctness (PC) is today’s major heresy!” Napier tweeted.

Napier’s word choice is particularly noteworthy considering Pope Francis told reporters on a flight back to Rome from a visit to Armenia late last month that Christians should “apologize” for their treatment of gays and lesbians.

German Cardinal Reinhard Marx also has continued to beat the drum regarding homosexuals, saying the Church had in the past exhibited a “very negative” view of gay people that he considered scandalous. He has gone so far as to suggest that the Church bless same-sex relationships while stopping short of calling them marriages.

After Napier’s tweets in the wake of the Orlando shootings, he followed up on Twitter to emphasize that he was not criticizing Pope Francis.

“I said: political correctness is THE major heresy! I didn't in any way define what is PC or not!”