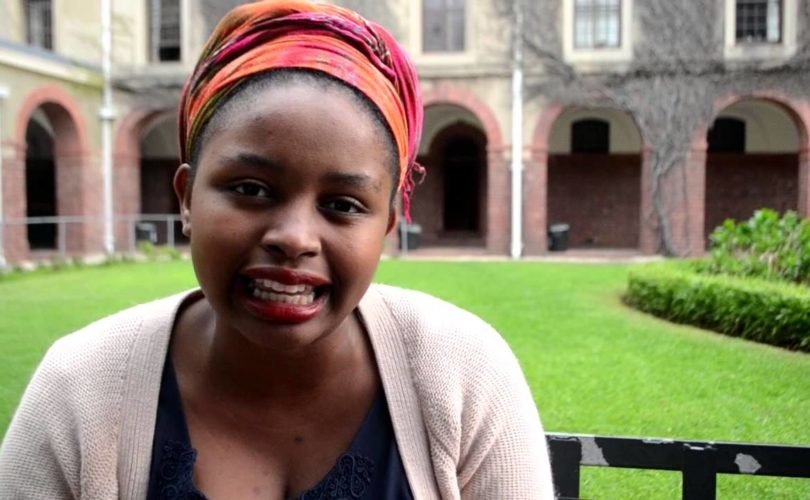 CAPE TOWN, July 9, 2015 (LifeSiteNews.com) – A student leader, social justice volunteer and budding statistician at the University of Cape Town has been brought low by the self-styled “LGBTQIA+” lobby for expressing regret – on her personal Facebook page – about the U.S. Supreme Court’s decision to mandate same-sex “marriage”.

But Zizipho Pae is also a debater, a Toastmaster, a sportswoman and a Christian. She isn’t taking her ouster as acting president of the Student Representative Council lying down. With her friend Lusami Nemalili she has launched a petition on change.org that has already garnered 2,509 signatures.

Her initial alleged offense was to comment on the U.S. same-sex “marriage” ruling, stating, “We are institutionalising and normalising sin! Sin. May God have mercy on us.” Though this may seem somewhat beyond her full-time role as vice president-external for the student council, and acting position as president, Pae spent six weeks in Washington, D.C. interning for the World Bank Group in 2013 and in 2014 was a delegate to the One Young World Summit in Dublin. She has also taught mathematics to underprivileged children.

Pae was suspended, according to news sources, after a protest at the SRC offices by UCT’s community of “lesbian, gay, bisexual, transgender, intersex, asexual, agender and queer and others (LGBTIAQ+).” The skeleton crew of executive officers on hand over the summer holidays then suspended her until a final vote can be taken when classes resume later in July and the full council returns.

The SRC's Greg Keal told news media, “The SRC doesn’t agree with the views that were expressed on that Facebook… and we completely believe equality is a priority.” The SRC asked Pae to delete the post and apologize. She reportedly refused to do either, citing her freedom of expression and religion.

The university vice chancelor Francis Petersen issued a statement extolling the university’s record of recognition for sexual minorities while recognizing that Pae had a right to express herself—within limits. “UCT upholds the right of each individual to exercise freedom of speech and to voice their own opinions in a responsible manner. This right, as well as the right to freedom of religion and the human rights of LGBTQI+ people, are constitutional rights.”  So-politically correct is UCT, it has an “ombud” instead of an ombudsman to deal with complaints of discrimination.

Meanwhile, Pae and her supporters claim her rights have been violated by the homosexual lobby who invaded her office, tore Scriptural passages from the walls and posed for sexually provocative pictures they then posted on Facebook.

Pae has also been subjected to insults and abusive language, she claims. Family Policy Institute Director Errol Naidoo has urged Christians to email UCT Vice Chancellor Dr. Max Price at [email protected] asking that he “urgently intervene to stop the horrendous attacks and anti-Christian bigotry against Zizipho Pae.” Also, he wants Pae’s supporters to write to SRC president, Ramabina Mahapa at [email protected] “and request that he not cave in to homosexual gestapo tactics and also protect the constitutional rights of Christian students at UCT.”

The petition in support of Pae reads in part, “We believe UCT should protect Zizipho from the lesbian, gay, bisexual, transgender, queer, intersex and asexual (LGBTIA+) society and promote an environment where people can express their differences, beliefs and causes in an acceptable, reasonable and fair manner.” It calls for her reinstatement and claims that she has violated no SRC regulations.