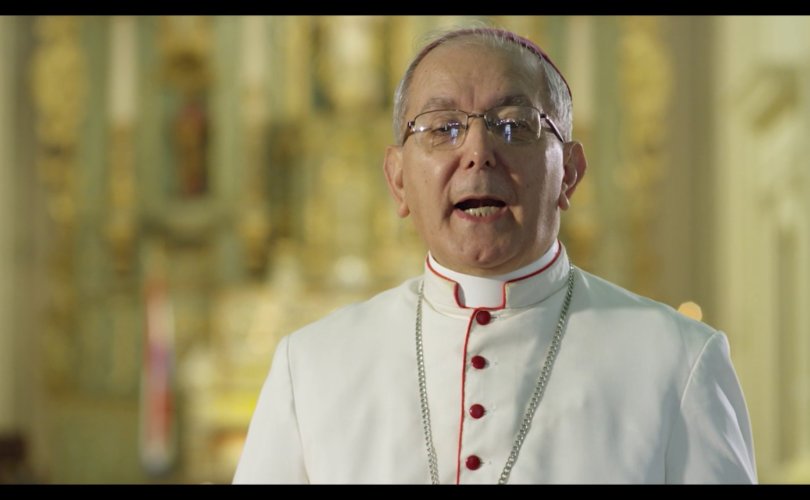 ASUNCION, Paraguay, January 3, 2020 (LifeSiteNews) — Archbishop Edmundo Valenzuela of Paraguay told a congregation on the Feast of the Holy Family that Christians must accept and respect homosexual couples and the “families” they form.

Speaking on Sunday in the capital of the South American republic, Archbishop Valenzuela said at his cathedral, “Today we find that there are homosexual couples who form families. We cannot ignore that reality. They require a particular competence and preparation on the part of family movements to accompany these people, in order to show them mercy and understanding.”

Referring to homosexuals, the archbishop said, “We should not denigrate them. We should not simply accuse them of a morally irregular situation, which is true, because we do not achieve anything with that; but we must propose that they live properly, reintegrate, pray, and that they be in solidarity and sensitive to the poor and the most needy. So this tells us about a variety of families in our globalized society in which we are all immersed.”

“The Church accompanies divorced and remarried families, families conflicted by hatred and rejection, single mothers, widows, with great mercy, making it known that the human person can be reintegrated, to do good, love God, undertake good works for the benefit of others, and love once again,” said Valenzuela.

The archbishop added, “Therefore, it is up to us to provide that openness and ability to understand these new and very difficult situations, to which we must, without a doubt, show solidarity with an attitude of mercy. Brothers and sisters, let us give thanks that the Church is a family of families.”

Apparently reacting to consternation that was stirred by his comments, Valenzuela issued a subsequent statement on Monday saying he was “concerned” by media reports about his homily. Saying the media “erroneously interpreted” part of his sermon, the archbishop underlined that Christians should “‘adequately’ accompany homosexual couples.”

“We specified in other points in the homily how that accompaniment should be carried out,” he wrote, adding, “We adhere to the Magisterium of the Church as expressed in the Catechism in this and all issues relating to family.” He asked for professionalism on the part of members of the media.

However, an earlier communique from the archdiocese gave a more nuanced view of the homily in question. Before the press release was scrubbed from the website, it thanked the media for broadcasting Valenzuela’s words to a wider audience.

The missing press release stated that the archdiocesan office of family ministry bases its attention and “accompaniment” of “our brothers and their families in all stages and situations of life” on Amoris laetitia, the controversial 2015 apostolic exhortation promulgated by Pope Francis. Controversy arose over Amoris laetitia when critics asked whether it had changed Catholic teaching regarding access to the sacraments of Reconciliation and the Eucharist for divorced couples who have civilly remarried.

Now gone from the archdiocesan website, the statement said Archbishop Valenzuela had been speaking “colloquially” and his reflection should be “interpreted in the family and procedural context of personal development.” Pointing toward a distinction between sin and those who commit sin, the statement went on to say, “It is not easy to distinguish people from their decisions by which they are known.” It noted that the Catechism of the Catholic Church calls on believers to treat homosexual persons with respect.

According to the Catechism, “Homosexual acts are intrinsically disordered” and “contrary to the natural law. They close the sexual act to the gift of life. They do not proceed from a genuine affective and sexual complementarity. Under no circumstances can they be approved.” While those persons with homosexual tendencies are called to self-mastery and prayer in order to “approach Christian perfection,” the Catechism says “unjust discrimination” against them should be avoided and that they should be shown “respect, compassion, and sensitivity.”

At the Amazonian Synod in October, Valenzuela said he was in favor of the ordination of married men to the priesthood, as well as consecrating women to the diaconate. He was among the prelates chosen by Pope Francis to draft the synod’s controversial final document. In November, the bishop announced that he had tendered his resignation to Pope Francis upon reaching the age of 75, when canon law requires prelates to abandon diocesan governance.