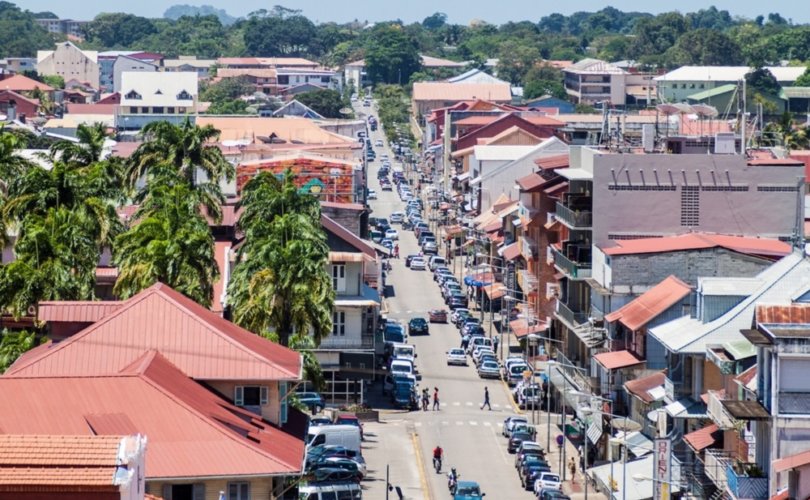 March 6, 2020 (LifeSiteNews) — The Catholic Church in French Guiana, one of the nine countries of the Amazon Basin represented at the Amazon Synod in Rome last October, recently held its second local synod with many winks to the Roman event. Several “resolutions” were made in favor of the rights of the indigenous peoples of the region. Also high on the list of priorities were reflections on the environment and the “past” of the local clergy.

The most spectacular move involved a commitment on the part of the Church of French Guiana officially to beg “pardon” for its “complicity” in the colonization process. No less important was the decision to implement a local liturgy.

All this clearly aims to be a practical implementation of the Amazon Synod.

The event took place in Cayenne, under the authority of French Guiana’s only bishop, Mgr. Emmanuel Lafont, who has been a vocal supporter of the Amazon Synod’s innovations. The local press saw it first and foremost as an expression of “the cry of the peoples of Guyana, the cry of the forest, of the water and the fauna,” in view of “working at the creation of an ecological and Amazonian Church.” (Editor’s note: The French, including Mgr. Lafontt, refer to French Guiana as “Guyana,” not to be confused with the nation English-speakers call “Guyana” [which French-speakers call “English Guyana”] to the west. This artitcle is aboutt only French Guiana; see an anglophone map here.)

Bishop Lafont was presented as searching to “raise awareness for the preservation of the planet” and seeking to give the Catholic Church an “Amazonian face.” “The issue of ordaining married men is not a priority, save perhaps in a few dioceses which only have a small number of priests. What does stand out is the enormous place occupied by women and in particular by religious. They are numerous … and remarkably integrated into the social structures of the peoples of the forest. The church should recognize their formidable ministry, for which they lack recognition,” he told the local media prior to the meeting.

In another interview, Bishop Lafont said pope Francis had “closed no doors” regarding the ordination of married men, adding that at the Amazon Synod, there was division on this point “not only in principle but also for practical reasons.” “We felt an obvious need to declericalize this church,” he said. “If we were to ordain married men, if only to the permanent deaconhood, and clericalized them also, we would have missed the whole thing,” he added, agreeing with the journalist that Pope Francis remained silent on the issue because he thought the time was wrong. “Yes, the pope feels that before creating new ministries and giving them clear recognition, it is important to move forward towards a new way of living together in the Church,” he said.

In that same interview with the French liberal Catholic weekly La Vie, Bishop Lafont said: “Before nitpicking about native American statuettes of pregnant women and yelling the word ‘idolatry,’ we should sweep our own doorstep and take a critical look at our own idols: the gods of Money, Holidays, and Consumption. We are the first to need conversion.”

At the synod in Cayenne, a local community leader for “integral ecology,” José Gaillou, mentioned to the press all the forms of “conversion” the Church will have to go through: pastoral, ecological, cultural, in particular in “accepting other people’s way of life” and even “turning towards Nature.”

An indigenous man spoke of the pollution of fish, water, and earth that is damaging the lives of the local people where gold-hunters use mercury to amalgamate the precious metal. But while this is surely tragic, it sadly underscores the way in which God is not being put first in Catholic discussions.

The French Guiana synod was held from February 23 to 26 and explicitly took place in the wake of the Rome synod, under its logo and with the aim of presenting “propositions for coming times.” Built on the model of the Apostolic Exhortation Querida Amazonia, its final document presented a series of dreams: social, cultural, ecological, pastoral, and synodal.

The first article of this final document spoke of the Church of French Guiana’s “prophetic” show of “indignation” because of the “ injustices and crimes of yesterday and today.” “We demand an end to injustice towards the indigenous peoples,” the document stated, adding that a “solemn celebration” will mark the repentance of the church “because of the complicity that took place with colonization, the slave trade and other crimes of the past.” Both propositions were adopted with about 90 percent of the vote.

Indigenous peoples represent about 10,000 souls living in the south of French Guiana in the Amazonian forest.

By article 3, and still in the absence of any mention at all of God, Jesus Christ, or any religious concept, the synod was making another political statement: “We publicly support the demands of the peoples of the forest in view of the ratification of Convention 169 of the International Labour Organisation and the recognition of areas of collective property, following the 2017 Agreement.” This is about socializing the forest regions of the South American country.

With regard to France, this official document of the Catholic Church demanded greater autonomy, even though French Guiana already has a local assembly and depends heavily on the French “métropole” for its economic needs.

It is in the chapter on the “cultural dream” that the synod committed to “work on  setting up a liturgy, cultural rights and singing that will better harmonize with the riches of all the diverse cultures in French Guiana.” “We recognize that it is up to the indigenous peoples themselves to decide what they want to keep and what they want to change, in the light of the message of Jesus,” decided 88 percent of the participants.

The “environmental dream” suggested that all Catholics should “make Laudato Si’ their own” together with Querida Amazonia. “We invite all Guyanese to reduce the use of fossil fuels as much as possible (consumption of gasoline, plastic, etc.) and to promote renewable energies (65%),” added the text, at the same time deciding to promote a transformed waste management, recycling, and the use of video projectors and existing songbooks instead of paper handouts during the liturgy.

It is only under paragraph 15 — the “pastoral dream” — that the French Guiana synod finally spoke about offering “Jesus’s friendship” and “salvation” to all. Under that same heading, it was announced that priests would go on longer missions into the bush and would spend more time with their people to learn their language and culture. “We shall try to establish new ministries, also in the remotest villages, with women, men, proposals for diaconal and presbyteral vocations and a genuine ministry of lay accompaniment for mourning families.”

This is how so-called lay ministries are coming in through the back door in the wake of the Amazon Synod.

In the same vein, under the heading “the synodal dream,” the signatories of the document state that the Church in French Guiana wants to “turn laypeople into prime actors” of their mission. This includes giving women a larger role in “pastoral decisions” and training deacons in view of “ecumenical, interreligious and inter-cultural dialogue.”

“We want to move from being a clerical church to becoming a synodal one, where all join in decisions involving the mission and community life … through mutual listening, prayer on what we hear, and welcoming of what the Spirit tells us through this listening and this dialogue,” they wrote. These recommendations will be made to all the parishes in the country where priests and lay people, “always together and never separated,” make decisions in order to implement all resolutions taken by the synod.

It was also decided that the document itself, together with Laudato Si’, Querida Amazonia, and  the Amazon Synod’s (controversial) final document would be presented to the local authorities.