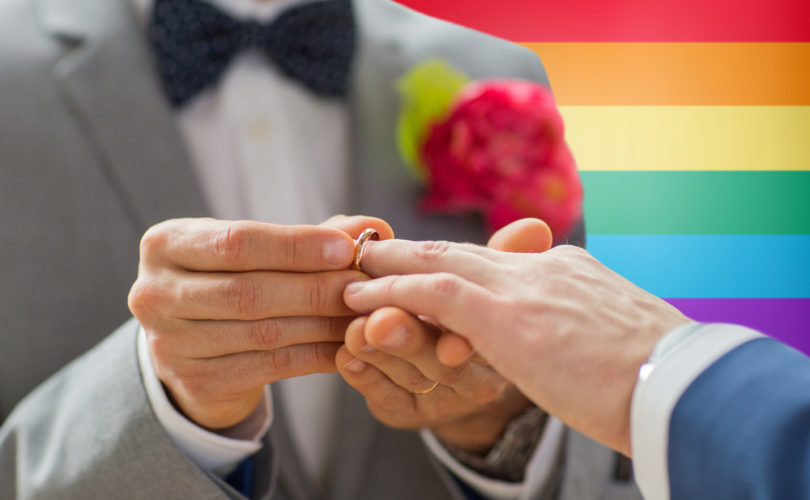 COLUMBIA, South Carolina, February 27, 2018 (LifeSiteNews) – South Carolina legislators have proposed a bill that calls homosexual “marriage” a “parody” of “natural” marriage between a man and a woman.

The “Marriage and Constitution Restoration Act” (H. 4949) introduced earlier this month clarifies that marriage is between one man and one woman, and defines same-sex arrangements, whether legally solemnized or not, “parody marriage.”

The Merriam-Webster dictionary defines “parody” as “a feeble or ridiculous imitation.”

Six Republicans sponsored the Act, which uses Constitutional arguments to “prohibit the state from respecting, endorsing, or recognizing any parody marriage policy.”

The preamble of the proposed amendment to South Carolina’s Constitution states that it is scientifically “unsettled” if homosexuality is “immutable or genetic,” and therefore sexual orientation is “a matter of faith.”

Sexual orientation is “faith-based,” according to the amendment, because it is based on a “series of naked assertions” and unproven “assumptions that are implicitly religious.”

The Act states that the “religion” of those who adhere to faith in homosexuality as natural is a form of “Humanism.”

“All forms of parody marriage, and all self-asserted sex-based identity narratives, and sexual orientations that fail to check out the human design are part of the religion of Secular Humanism,” the bill states.

Citing cases where the U.S. Supreme Court (SCOTUS) ruled Secular Humanism is a religion, the Marriage and Constitution Restoration Act concludes that the state may not favor or endorse religion.

In contrast, traditional marriage is “secular in nature” because “civilizations for millennia have defined marriage as a union between a man and a woman” and such universal marriage “arose out of the nature of things.”

The Act also notes that traditional marriage accomplishes “its intended objective” (of societal benefit and continuation), whereas “parody marriage” does not.

The preamble also points out that after SCOTUS legalized same-sex “parody marriage” “there has been a land rush on the persecution of non-observers by Secular Humanists.”

Adherents to homosexual dogma have sought “to infiltrate and indoctrinate minors in public schools to their religious world view, which is…obscene and is not secular.”

It further complains that South Carolina’s endorsement of “parody marriage” has “excessively entangled the government with the religion of Secular Humanism” and “created an indefensible legal weapon against non-observers.”

Splitting an important Constitutional hair, the bill states that it is “the First Amendment not the Fourteenth Amendment (that) has exclusive jurisdiction over which types of marriages the State can endorse, respect, and recognize.”

The First Amendment respects the free establishment and exercise of religion;  the Fourteenth Amendment was used by the Supreme Court to find a right to “privacy” and from that to find rights to abortion and same-sex “marriage.”

“The central issue should have been: what is the essential nature of marriage, and what consequences result if we redefine it?”  Dr. Adamek wrote.  “Instead, the Court focused on a ‘right to personal choice’ flowing from ‘individual autonomy’ and ‘the right to privacy,’ and concluded that two persons of the same sex have a Constitutional right to marry.”

Neither “personal choice” nor “individual autonomy” nor “privacy” nor “dignity” rights are actually in the U.S. Constitution.

As Jeffrey Rosen in the Atlantic put it, the “‘Right to Dignity’ may provide support for same-sex marriage, but it also empowers judges to decide whose ‘dignity’ they wish to prioritize.”

Adamek made a similar case against Roe.  “The Court dismissed the quintessential issue, saying, ‘We need not resolve the difficult question of when life begins.’  Instead, it focused on the woman’s ‘right to privacy’ which it could not explicitly find in the Constitution, but which it declared to be ‘broad enough to cover the abortion decision.’”

“As a result, the lives of over 58 million human beings have been ended by abortion since January 1973,” the professor concluded.

The proposed South Carolina amendment concludes that any citizen may “conduct any form of marriage ceremony” and “cultivate any self-asserted sex-based identity narrative or self-asserted sexual orientation at will, even if it does not check out with the human design as a matter of self-evident observation.” It adds, however, that the state of South Carolina will not “respect, endorse, or recognize” such parody marriages.

The proposed amendment to the code of state laws is now before the Committee on the Judiciary after it was read aloud in the senate chamber on February 15.