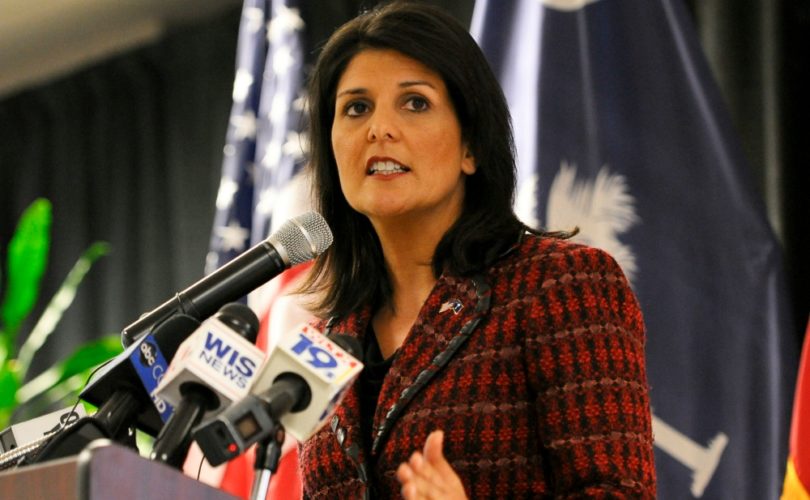 CHARLESTON, May 26, 2016 (LifeSiteNews) – South Carolina has joined 13 other states that forbid abortions to be performed on unborn children capable of feeling pain.

As expected, Governor Nikki Haley, a Republican, signed the Pain-Capable Unborn Child Protection Act on Wednesday. The law restricts abortion to the first 19 weeks of pregnancy.

“South Carolina took a courageous stand to protect women’s health and safety in limiting abortion at a point at which the risks of an already dangerous procedure increase for women,” said Clark Forsythe, the acting president of Americans United for Life.

Carol Tobias, the president of National Right to Life, agreed, “The smallest and most vulnerable members of our human family need our protection, and South Carolina has taken a vital step to save unborn children who are capable of feeling the excruciating pain of abortion.”

Under the new law, abortionists who perform an abortion on a child at 20 weeks or later would face three years in prison and a fine of up to $10,000.

An ACLU complaint against the Georgia law was dismissed, but the ACLU has said it plans to immediately appeal and ask for a new injunction against the law.

Although supporters of abortion-on-demand often dismiss the underlying notion of fetal pain as “junk science,” numerous, peer-reviewed scientific studies have found that babies are capable of feeling pain by 20 weeks' gestation.

“Basic compassion for human life demands that this legislation be enacted all over the country,” said National Right to Life Director of State Legislation Mary Spaulding Balch, J.D. “In our upside-down society, most animals have more rights than unborn members of the human family.”

While animal cruelty is illegal, the United States is one of a handful of nations – including China, North Korea and Canada – that allow extremely late-term abortions when babies are capable of feeling pain.

Susan B. Anthony List President Marjorie Dannenfelser said, “A national limit — which would save up to 18,000 lives a year and protect many women — is long overdue.”

But she and Forsythe emphasized this would come only after a political battle with politicians who support abortion-on-demand and their funders, like Planned Parenthood.

“The abortion industry puts profits over people, consistently fighting commonsense limits on a procedure that can be deadly,” Forsythe said. “As technological advances allow infants to survive earlier in pregnancy, it’s clear that we must consider the humanity of a life that could be lived outside the womb and that we must consider the inherent harms of abortion to women.”

Fetal pain: Spurious assertion or scientific fact?
All you need to know about fetal pain in one story