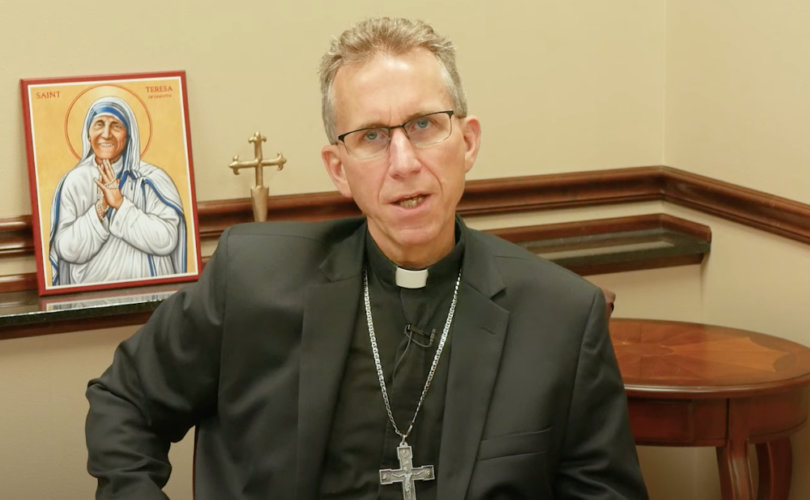 In the 14-page document, titled “Diocesan policy: conforming with the Church’s teaching on human sexuality in education settings,” DeGrood starts by giving his “rationale” for introducing such a policy.

“By creating the human being man and woman, God gives personal dignity equally to the one and the other. Each of them, man and woman, should acknowledge and accept his sexual identity,” DeGrood writes, quoting sections 2360-2363 of the Catechism of the Catholic Church.

“By its very nature, sexuality is ordered to the conjugal love of a man and woman within the bond of marriage (c. 1055). And marriage, which is a partnership of the whole of life, is always ordered by its very nature to both the good of the spouses and the procreation and education of children,” added the bishop.

Continuing, DeGrood reminds Catholics that these “truths are not merely faith based; rather, such realities are also knowable through the use of properly functioning senses and right reason,” therefore, “We do not serve anyone’s greater good by falsifying the truth, for it is only the truth that frees us for the full life that God offers to each of us.”

Thus, when a person experiences same-sex attraction or some form of gender dysphoria, such struggles do not change the biological fact of how God created that person, and it would be untruthful for the Catholic Church or our Catholic schools to pretend otherwise.

DeGrood’s policy bans “those who choose to live a transgender lifestyle publicly and declare such his/her intent in either word or action” from serving in any official capacity in Mass, and also from carrying out “employed ministry on behalf of any parish, parochial school, or diocesan ministries.”

Catholic schools are to ensure that boys and girls restrooms, locker-rooms and sports teams are for their sex only, with no “shared use of restrooms or locker rooms by any students of the opposite gender.”

Both parishes and schools are forbidden from sponsoring, chartering, or providing meeting space “for any organization that violates the definition of marriage, sex, or gender as indicated” in the diocesan policy.

Reception of Holy Communion is prohibited for people “publicly living a transgender lifestyle or undergoing a transition…until they fully accept the teachings of the Church.”

Likewise, Confirmation is to be “delayed until church teachings are accepted” for “those living a transgender lifestyle, considering transitioning, or have begun transitioning.” Nor may any such individuals serve as godparents or sponsors for Baptism or Confirmation.

DeGrood makes it clear that the prohibitions in the policy do not apply to those who are merely struggling with issues related to sexuality and identity, but to those who are actively living their lives publicly as such.

Moreover, DeGrood, who previously backed COVID-19 vaccine exemptions, states that the bans contained in the policy would be immediately lifted for an individual if “Church teachings are accepted.”

Despite Church teaching being clear and unchangeable on the issue of same-sex relations and transgenderism, many other prelates continue to push the radical LGBT agenda within the Church.

Even high-ranking churchmen like Germany’s Cardinal Reinhard Marx and Cardinal Walter Kasper, along with America’s Cardinal Blase Cupich and Bishop Robert McElroy have been able to push the anti-Catholic LGBT agenda openly for years, often receiving appointments from Pope Francis rather than any type of censure.

As recently as Thursday, prominently pro-LGBT Jesuit priest Fr. James Martin was re-appointed to another five-year term as a consultor for the Vatican’s Dicastery for Communication by Francis, despite his public, continued rejection of perennial Catholic teaching on LGBT issues.