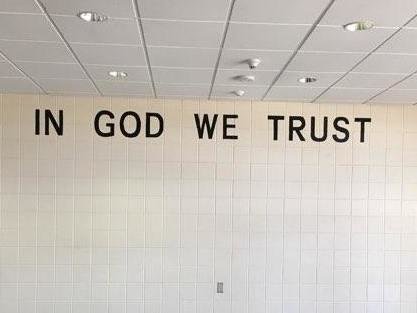 Effective with the 2019-2020 school year, “In God We Trust” will be posted in each public school in a “prominent location,” according to the provisions of the law. Examples of prominent locations include an entryway, cafeteria, or other common areas where students are “most likely” to see it.

Republican Gov. Kristi Noem signed the law in March, NPR reported, and its backers say its intent is to inspire patriotism in the state’s public schools.

The motto must be at least 12 inches by 12 inches in size and easily readable, the law states. It can be included on a mounted plaque, student artwork or other appropriate forms at the school principal’s discretion.

“Some have plaques. Others have it painted on the wall, maybe in a mural setting,” said Wade Pogany, executive director of associated school boards of South Dakota, in a Fox News report.

One school included it on its freedom wall as a patriotic theme, Pogany said.

Rapid City Area Schools staff members have been working on installation of the motto in the district's 23 schools for the past few months.

“As soon as we heard that it was going to be a state law … we started looking at different options and we chose to do stenciling as it is the most uniform and most affordable option,” Katy Urban, the district’s community relations manager, told NPR.

Most people believe “it's a really great thing for our schools and our districts and that kids are seeing it posted on a daily basis,” Urban said, but acknowledged that there are critics.

According to Urban, the community is fairly conservative, but she has seen threats of a lawsuit on social media, with the claim the motto excludes non-Christian faiths.

A group of Stevens High School students in Rapid City approached the school board earlier this summer, suggesting alternating “God” with other words on the signs for the purpose of being more inclusive. The suggested words included Buddha, Yahweh and Allah, along with others, such as “Science” and even “Ourselves.”

“I think that's a really foundational element of American society, is that we are a cultural melting pot and it is really important that we make all people who come to America to feel welcome and to be more in accordance with the First Amendment since we all have the freedom of religion,” Stevens High student Abigail Ryan told the local ABC affiliate.

The school board did not act on the request and proceeded with its original plan.

While the law does not provide funding for presentation of the national motto, it does stipulate that the state will take financial responsibility for any litigation related protests of the motto displays.

The state attorney general will represent at no cost any school district, district employee, school board or school board member against whom a lawsuit or complaint is filed over display of the national motto.

The state will also assume financial responsibility for any additional expenses aside from legal representation involved with litigation.

Wisconsin-based Freedom From Religion Foundation (FFRF), which challenges public religious symbols and expressions of faith in court and has displayed anti-Catholic bigotry in a New York Times ad, urged its South Dakota members to contact lawmakers and oppose the law.

“Our position is that it's a terrible violation of freedom of conscience to inflict a godly message on a captive audience of schoolchildren,” said Annie Laurie Gaylor, the group’s co-president.

A similar effort in Minnesota in 2018 met with backlash from Democrat state lawmakers, some of whom called the proposal offensive.

Indiana lawmakers are considering a bill that would post “In God We Trust” posters in classrooms in public schools.

In June, a California city approved adding the motto to its police and fire vehicles.

“In God We Trust” first appeared on U.S. coins primarily because of increased religious sentiment during the Civil War, according to the U.S. Treasury Department.

The phrase was declared the official U.S. motto in 1956, during Dwight Eisenhower's presidency.

Also in June, the Supreme Court declined to hear a case that sought removal of the motto from U.S. coins and paper currency. The motto had survived other previous court and legislative challenges.